Numbers with dementia will soon multiply

Despite our growing older population, Ireland is one of the last countries in Europe to produce a dementia strategy 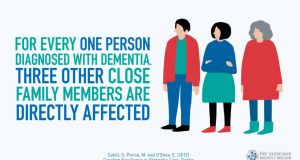 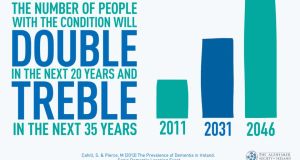 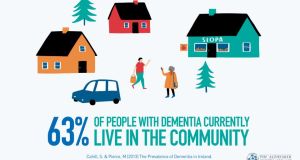 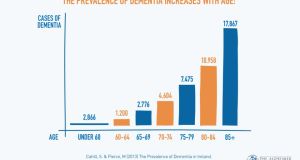 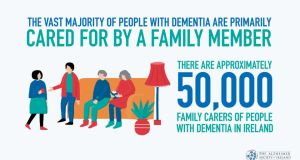 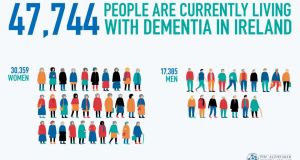 Ireland’s growing ageing population means that the number of people living with dementia will treble in a generation.

There are currently almost 48,000 people living with dementia, over half of whom have Alzheimer’s disease, a progressive neurodegenerative disorder. That number is expected to rise to 153,157 by 2046, according to a 2013 study, The Prevalence of Dementia in Ireland, by Suzanne Cahill and Maria Pierce.

Against these figures, the country’s first National Dementia Strategy is due to be published shortly, making Ireland one of the last countries in Europe to produce a strategy.

In 2011, the Government announced its commitment, under the Programme for Government, to the development of a National Dementia Strategy. 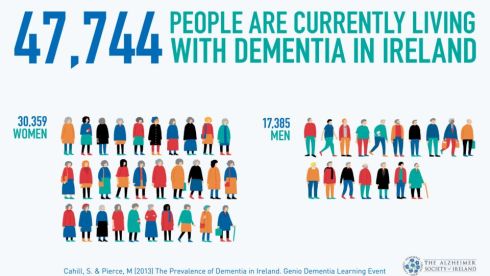 As a key advocacy organisation, the ASI wants to ensure that the voice of the person with dementia and that of the carer is heard.

Gerry Martin, the chief executive officer of the ASI, says that through lobbying, the society has concentrated on a number of areas and is “very aware that first and foremost we need to raise awareness of the issues surrounding dementia. We need to open up a conversation”.

Martin says there is a big stigma attached to dementia.

“We don’t believe the conversation is as open as it needs to be. It’s like where we were with the issue of cancer 20 or 30 years ago. People need to be prepared to speak about dementia in a positive way, in a way that concentrates on people continuing to live well even after what is a devastating diagnosis.

“Within our own services, we have noticed that people are not comfortable using words such as ‘Alzheimer’ or acknowledging that there is an issue to be faced. A serious campaign is needed to support the National Dementia Strategy.”

Dealing with a diagnosis of dementia or Alzheimer’s disease “is better than ignoring it”.

“There is no cure; let’s acknowledge that. But once people recognise the condition, they can be supported and have a better trajectory than people who are not supported. The earlier the diagnosis is made, the better. “Certain medication can have an impact on the condition but even outside the medical frame, people who can get information early will be in a position where they can plan for their own future, both in terms of care and on practical issues such as legal and financial planning.” 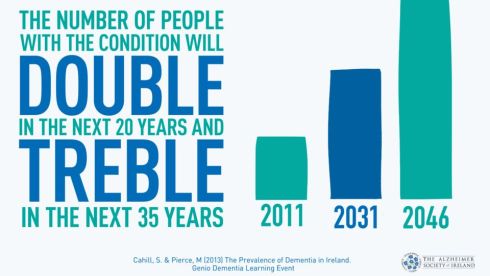 Martin says there is a lack of awareness about the diagnosis of dementia/ Alzheimer’s disease and about what supports are available for people who have been diagnosed.

“That leads to GPs and other healthcare professionals tending to shy away from making the diagnosis. That’s a real disaster.

“We get phone calls to our helpline every day, in which people say they spoke to their GP about memory problems and were told it’s a natural part of ageing. That’s fundamentally wrong.

“Dementia is not a natural part of ageing. There is an absolute need for more education and training for health care professionals. The key message to GPs is that doing nothing is the worst thing they can do.” 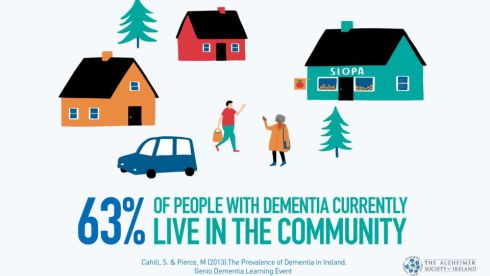 While the ASI is the primary provider of services for people with dementia as well as respite for carers, there is also private healthcare and some direct provision from the HSE.

“About 25 per cent of all nursing home populations are people with some level of dementia. Most nursing homes recognise that and some are building dementia-specific responses to that situation. There is a lot more to be done.”

Regarding whether private nursing homes have adequately trained staff to look after people with dementia, Martin says, “Some nursing homes are better than others, investing more in training.

“But there needs to be recognition within the health system that dementia specific care needs more than just generic provision.”

Most people diagnosed with dementia “want to stay at home”.

“Most family members want to look after them. While that’s the right thing to do, it represents a challenge to the system. Keeping people at home requires support. Home-care provision is hugely important. It can be provided less expensively than in acute and residential settings.”

The majority of people (63 per cent) with dementia live at home and in the community. There are approximately 50,000 family carers of people with dementia.

As part of the ASI’s pre-budget submission for 2015 it is calling on the Government to resource community-based care for people with dementia and their carers.

The publication of the National Dementia Strategy is an opportunity to commit resources to community-based care that supports people to remain at home for as long as possible.

“For this to happen, the health and social care system needs to be reconfigured to allow people with dementia to live at home as their first option,” it says

Premature admission to long-term care is costly for the Government, given that the average weekly cost of providing care through the Nursing Home Support Scheme in private and voluntary nursing homes is €817. 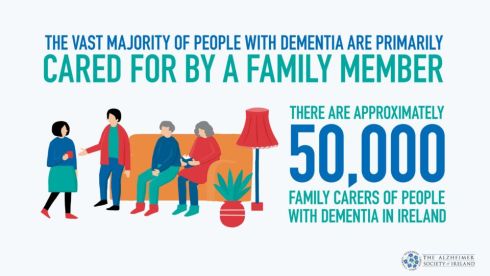 “Established in early 2013 by the Alzheimer Society of Ireland (ASI), the Irish Dementia Working Group ensures the direct involvement of people with dementia in the work of the ASI and in influencing public policy that impacts their lives.

The group is resourced and supported by the ASI; we all have dementia and we come from all parts of Ireland.

During the drafting of the National Dementia Strategy, members of the Irish Dementia Working Group met the multidisciplinary expert team who work on the strategy.

We told them what it is like to live with dementia and the challenges we face day to day.

I was diagnosed with early-onset dementia two years ago at the age of 62. I feel it is important that our voices are listened to in the development of the strategy so that we can help and influence others’ experiences of dementia now and in the future.

More education about dementia is needed and the only way that this is going to happen is through us telling our stories.

In addition to having an input to policy matters, members of the working group contribute our opinions about a range of ASI work and lend our voices to many issues.

The group has given the members an insight into other people’s experience of dementia and a renewed sense of purpose and confidence.

We are talking to others who understand and who are going through the same experiences.”

Helen Rochford Brennan is the chairwoman of the Irish Dementia Working Group. For more information about the group, or to join it, call the ASI at 1800 341 341

The Alzheimer’s Society of Ireland

The early aim of the ASI, which was set up in 1982 by Winifred Bligh and Imelda Gillespie, was to offer information, understanding and support to people caring for a loved one with dementia or Alzheimer’s disease.

At that time, the only statistics available indicate that there were 480 cases of Alzheimer’s disease in Ireland.

Within a year of lobbying for better reporting of statistics, the figure was revised to 850 cases.

Public information meetings were held around the country with the support of the medical community.

The ASI has six regional offices, more than 2,500 members, 300 volunteers and more than 700 full-time and part-time staff. Much of the training it provides to staff, home carers and volunteers is accredited by Fetac. 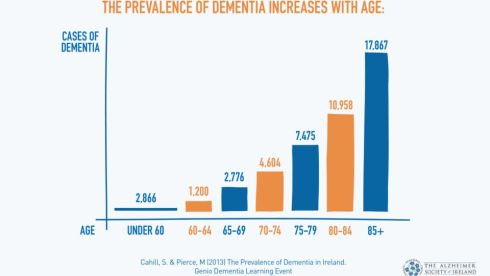 The coronavirus crisis threatens to exacerbate the shortage of menopause medication

Today is the day I run out of HRT patches. Consider yourself warned
3

Isolation on the Wild Atlantic Way: ‘I stopped here for the day – and never left’
7

Want to protect yourself from coronavirus? Then wash your hands
8

Coronavirus: Is now the time to dream bigger about how we live our lives?
9

Róisín Ingle: Hairwise, it’s only a matter of time before we go full Sinéad O’Connor
10

So your children now watch too much TV? Cut yourself some slack
Real news has value SUBSCRIBE