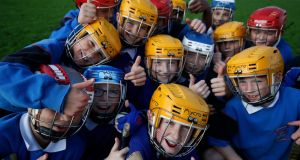 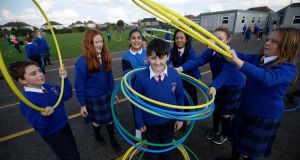 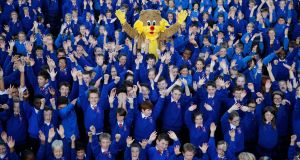 Pupils of St Paul’s primary school in Abbeylands in Navan gather for a picture after their exercise time with the school mascot. Photograph: Nick Bradshaw 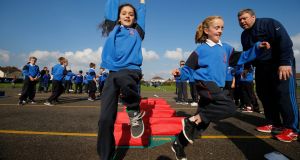 Mr McLoughlin and pupils during their exercise time at St Paul’s primary school in Abbeylands in Navan. Photograph: Nick Bradshaw

Students at a national school in Co Meath have stepped up to the plate when it comes to embracing a healthier lifestyle.

Yoga, mindfulness and healthy food instead of sugar-filled snacks are on the curriculum at St Paul’s National School in Navan.

For the past six years, the national school has evolved a healthy eating and active lifestyle plan for more than 700 students, which they are taking step by step with the use of class pedometers.

The programme has resulted in more mentally focused, confident, fitter and happier children and staff, according to school principal Patricia Fahy.

“In 2010, we introduced our healthy lifestyle campaign with the help of the health promotion unit in Navan, parents, staff and, of course, the children.

“The following year, our own initiative ‘Operation Motivation’ was aimed at the staff to lead by example and motivate physical and mental wellbeing in the children,” she says.

The initiative resulted in the school receiving a healthy lifestyle flag.

“Scores created excitement among the children who experienced an overwhelming sense of enthusiasm,” says Fahy. “The pupils enjoyed enhanced levels of self-esteem and you could almost feel the positive energy which was generated throughout the school.”

Even the teachers got involved to further encourage their classes to “step it out” and promote fun and sportsmanship among the various years.

So enthused are the children that many of them have now obtained their own pedometers to use outside of the school environment.

St Paul’s then picked up the pace even further and students began running the 400m track on the school grounds in between classes.

This initiative promotes class-integration and a “buddy” system enables older and younger children to get to know each other better.

“When children line up after lunch or in between subjects, they all run a lap of the track,” says Fahy.

“Senior and junior classes are paired up to run the track alongside their teachers several times a day. They all love it.”

At the launch, Navan’s Healthy Town ambassador and native Hector O hEochagain was hugely impressed by the school’s commitment to health when almost 800 staff, parents and pupils turned out for an exercise session to coincide with the event.

The school’s exercise programme doesn’t stop there. Pupils also take part in DEAD (Drop Everything and Dance) time when students abandon lessons and dance at their desk to music, spontaneously piped in through the class intercom.

“Some mornings in the school yard before the bell rings, we’ll get the children to dance to various songs, like the Cha Cha Slide,” says sixth-class teacher Fiona Carroll.

All children’s abilities and interests are taken into account when it comes to lunchtime playground games, that include circuit training, football, hurling, rounders, basketball, tennis, hula hoops and skipping.

Pupils dress up as lunch detectives and periodically visit other classes to inspect the contents of lunch boxes.

“The children, parents and staff got together and compiled lunchbox guidelines urging parents to pack wholesome lunches with milk or water as the preferred drinks,” says Fahy.

The guidelines, which aim to “take the worry out of school lunches for parents”, are mindful when it comes to responsible teaching of healthy eating.

It states: ‘There is so much emphasis put on ‘dieting’ that there is a risk that children may develop unhealthy habits or ideas about food at this crucial stage in their development.”

The booklet, called Use it, Don’t Lose it, contains sample lunches and simple healthy recipes that children can make with their parents at home.

“The best way to ensure that children actually eat their lunch and don’t just bring it all home again is to get them involved in the process,” it adds,

“Children in second class took various foods and drinks and found how much sugar they contained.

“We couldn’t believe that some seemingly healthy foods such as some yoghurts contained up to four spoonfuls of sugar.”

The staff say the programme has made children more aware of what they are eating and some pupils are choosing to ditch their chocolate treats for healthier options.

Visiting nutritionists to the school have lectured on how healthy eating can have positive effects on mental health and the children now practise yoga, mindfulness and self-esteem classes..

“The school programme has created an overwhelming enthusiasm to develop a healthy lifestyle, which we hope will continue with the children into their teenage years and adult life,” says Fahy.

Up until Halloween, the pupils are taking part in “positivity weeks” that promote positive thoughts with the help of art, photographs and achievement boards.

1. Taking steps to be healthy with pedometers.

2. Buddying up between older and younger pupils to run laps around the school’s 400m pitch several times during the school day.

3. Spontaneously piping music into classrooms for DEAD time when pupils drop everything, get up from their desks and dance.

4. Having a range of activities in place to suit all tastes.

6. Getting staff totally involved in all aspects.

7. Having a rota of “lunch detectives” to inspect lunch boxes for healthy food.

8. Undertaking sugar experiments to determine the amount of sugar in different foods, including so-called healthy produce.

9. Encouraging parents to park 15 minutes away and walk their children to school.

Find out more about The Irish Times Pfizer Healthy Town initiative at irishtimes.com/healthytown

From yoga to HIIT training, your guide to solitary exercise
6

Looking for a nifty home-working desk? This Irish designer model could solve your problems
Real news has value SUBSCRIBE