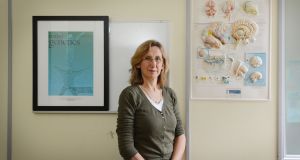 A leading expert in motor neuron disease (MND) has said she is optimistic that new drugs will change the lives of those diagnosed with the disease in the next few years – and that Ireland can be at the forefront of the breakthroughs.

Speaking following the death of Physicist Stephen Hawking on Wednesday, Prof Orla Hardiman – professor of neurology at Trinity College Dublin and consultant neurologist at Beaumont Hospital – said the clinic in Beaumont sees 80 per cent of all the people with motor neuron disease in Ireland.

There is a great deal known about the disease in Ireland, not least because Prof Hardiman has been running a register for MND since 1994.

“There are more than 2,000 on the register, so we’ve been able to look at it in great detail,” she says.

Hawking survived for more than half a century with the debilitating disease, despite the majority of people dying within a few years of diagnosis.

“While it’s true that the majority have a shortened lifespan, there are people who live long lives with the disease,” says Prof Hardiman. “And there are also rare cases where the disease doesn’t really progress at all. What we say to people is that, obviously, it’s not a good diagnosis to have and it carries a bad prognosis in general, but everyone is different. Some will live much longer than the usual three to five years. It’s also the case that some people’s disease moves very rapidly and they die within six months. There is huge variation as to the presentation of the disease and the rate of progression.

“The second thing is that the younger the age when you are diagnosed, the better the prognosis. You can also see results when you introduce technologies – something we don’t do in Ireland very often. Stephen Hawking was ventilated, with a long-term machine doing the breathing for him. And people can live for a very long time with very high-quality nursing care.

“It doesn’t guarantee longevity, but because most people with motor neuron disease die of breathing failure, the use of a long-term mechanical ventilator can prevent that from happening. Though it does not, necessarily, prevent the disease from progressing, so Stephen Hawking is a bit unusual.”

There is much that is still not known about MND, with the cause of the rare condition still the subject of debate and research. Scientists believe it is caused by several different things.

“We know that there is a gene that causes motor neuron disease in about 10 per cent of Irish people [with motor neuron]. A single gene that is closely associated with the disease,” says Prof Hardiman.

“ For the other 90 per cent, it is probably more than one gene that is responsible – working within a family that is increasing the risk of motor neuron disease, though not everyone will get it.

“Around 20 per cent will know someone else in their family who had motor neuron disease, or a related condition. So, for around 80 per cent, there’s nothing we can see in the families. Here, it’s probably a combination of a number of different genes that are working together, that change the way the nervous system works, coupled with possibly some environmental exposures. And we don’t know what the environmental exposures are.

“So we are learning a lot more about the risk. What we know now is that motor neuron disease is more than one disease, and these “risks” probably cluster in different groups of people, and that probably drives the disease in different sub-groups of people. So it’s heterogeneous in terms of its affects.”

The trick, according to Prof Hardiman, is to recognise that level of variability in order to develop new drugs capable of combating the disease successfully.

So for those currently living with MND, there is some light ahead.

“I am optimistic that we’ve got a handle on all the mistakes that have been made over the past 20 years in trying to find better treatments,” says Prof Hardiman. “And we are much more scientific and pragmatic about how we are approaching this now. We will see in the next 5-10 years the next groups of drugs that come forward, I’m confident that we will be able to make a difference and we will begin to see changes in the course of the disease.

“But of course all this takes money. We need funding, and we are just setting up a crowd-funding initiative to that affect. We had one before for genetic data, but the new initiative (probably to be called “Try Me”) will be to help ensure we have the right patients ready for trials. So everyone in Europe is doing the same sets of investigations. We’ll be kicking this off in Amsterdam in the summer.

“And we also need to have our national clinic recognised. The HSE has not supported the clinic at Beaumont properly, so we’re not properly funded. We will be starting a campaign in Ireland about this soon. We provide a national service, but the HSE does not support it as a national service. We’ve shown that people who come to that clinic live longer.”

Funding has also been a constant issue for the Irish Motor Neurone Disease Association.

“That’s a brilliant organisation,” says Prof Hardiman, “but the three nurses that go around the country, integrating care for people, are funded out of church-gate collections. The HSE does not pay for that either. It needs to face up to its responsibilities. It’s shocking.”