My surgeon got straight to the point: ‘You have stage-three colon cancer’

Lynch syndrome, a genetic disorder, can greatly increase your chances of getting several types of cancer 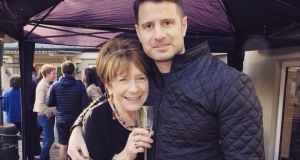 Andrew Jones with his mother have both tested positive for Lynch syndrome, a hereditary nonpolyposis colorectal cancer. “We were advised to go and see a cancer genetics specialist in the Mater hospital,” he says

Andrew Jones didn’t realise he had inherited a predisposition to colorectal cancer until he underwent several investigations six years ago and it was discovered that he and his mum tested positive for Lynch syndrome.

The condition, which is characterised by DNA mutations, can greatly increase the chances of getting several types of cancer at a young age.

“In late 2012, I was having stomach issues which I put down to drinking too much coffee and having a sensitive abdomen,” says the now 40-year-old. “I also noticed that my energy levels were very low and found myself having a lot of naps during the day. “Eventually, at the end of January 2013, I went to see my GP who prescribed medication for gastritis and said to come back in a month if there was no change.”

Four weeks later, Andrew, who works in wealth management for a Dublin stockbroking firm, made another appointment with his GP, who ran some tests and referred him to hospital.

“As there was no improvement, I returned to the doctor a month later and blood tests were done,” he says. “I waited for the results ahead of flying off to China for a holiday but the day before I was due to leave, my GP called to say that my bloods had shown a raised CRP (sign of inflammation in the body) and he recommended I go to hospital straight away and that I shouldn’t travel as there was a chance it was my appendix and he didn’t want me to be stuck in hospital in China.

“I was shopping for the trip at the time, but went straight to A&E where I underwent some more blood tests and a CT scan. This showed up a thickening of my bowel and an infection in the same area. I was kept in hospital for three days while they treated the infection so that they could do a colonoscopy to investigate further. But they decided to postpone the scan until my bowel area had recovered from the infection and I returned two weeks later for the colonoscopy – after which I read the preliminary report which said there was a lesion and biopsies were taken.”

Unconcerned about his symptoms and the possible outcome, Andrew, who lives in Glenageary, returned for results a week later and was shocked to be told that he had cancer. “When I was called in to see my surgeon for the results from my colonoscopy, I really wasn’t concerned and decided that I would go it alone as I didn’t want to inconvenience anyone else,” he says. “I really thought I was to be sent on my merry way [and would receive positive news] but my surgeon got straight to the point and told me I had stage-three colon cancer and that he would like to operate that week. The rest of the conversation, which lasted about 45 minutes, is a complete blur.

“I had my surgery and four weeks later started six months of chemotherapy. Unfortunately I was one of the unlucky people who react badly to the chemo sessions and spent a lot of the time in hospital as the doctors tried to keep all the infections I was getting under control. I even had a stay in intensive care when I had a rare blood infection and pneumonia, which was a very worrying time for my family. Subsequently my doctors said I was lucky to get through that couple of weeks alive.”

Still recovering from his ordeal, it was only at this point that Andrew’s doctors mentioned the possibility of a genetic disorder. “Lynch syndrome was mentioned to me by my oncologist a few days after my surgery when I was recovering in hospital,” he says. “I had never heard if it so obviously I went straight on to Google to do some research. My mum had cancer the previous year at age 64 [she has had four cancers in six years] so it was decided to test her tumour [as well as doing tests on Andrew’s cancer cells].

When you go into a meeting with your specialist, have list of things you want to know

“We were advised to go and see a cancer genetics specialist in the Mater hospital; which we did when I had completed my chemo. There we underwent some genetic counselling and blood tests were taken and sent to the UK for testing and three months later the results came back and showed that I did have Lynch syndrome. My brother and cousins [two girls] were also tested and while my brother was clear, one of my cousins tested positive.”

The Dublin man says he and his family were offered great support and would advise others who are predisposed to cancer to take any advice and help that is offered. “I would encourage people to ask questions – when you go into a meeting with your specialist, have list of things you want to know,” he advises. “Always try and bring someone along with you so that you don’t miss out on any important information. I wanted to know everything – good and bad – but I understand this may not be for everyone. I would also advise people to seek out support from organisations such as the Irish Cancer Society.

“If someone has recently found out they have a genetic predisposition to cancer, I would tell them that it isn’t a death sentence – what is important is that they keep up with the recommended monitoring so that any cancer can be caught early and treated with as minimal impact to their life as possible. There is also Lynch Syndrome Ireland which is a super support network and you can meet and talk to people in the same position.”

Having been through cancer and the shock of discovering he has Lynch syndrome, Andrew is well today but knows it is important to continue to be vigilant with both physical and mental health.

“Cancer is a physical disease, but it really can damage you emotionally and mentally as you start the recovery process,” he says. “When the routine and comfort blanket of hospital is suddenly gone, it is then that the realisation kicks in of what has just happened. Often I think back to when I was so sick in hospital and it gives me the shivers as I recall how close I was to dying.

“But life goes on, the body and mind has luckily healed and I’m enjoying life. I have a great family and group of friends along with a job that I really enjoy. However, there is always some test on the horizon, whether it is a CT scan or colonoscopy, and these remind me that with Lynch syndrome I’m never really in the all clear and that cancer will no doubt be showing up again in my life sometime down the line.”

ABOUT LYNCH SYNDROME
– Hereditary nonpolyposis colorectal cancer (HNPCC), or Lynch syndrome, is a genetic condition that is passed on between families.
– People with the syndrome tend to get colorectal cancer at a younger age than the rest of the population. They can also get cancers outside the bowel. These can include cancers of the stomach, small intestine, liver, gallbladder, urinary tract (ureter), brain, skin and prostate. Women with this condition also have a higher risk of womb and ovarian cancer.
– Lynch syndrome makes up about 2-5 per cent of all colorectal cancers.
– Doctors have put guidelines together to help them find out who may have the syndrome and which families may be at risk. These are called the Bethesda/Amsterdam criteria.
– If someone is concerned about their family history, it is important to discuss these concerns with a GP. He or she may then refer the person to a family-risk assessment clinic where family history will be looked at more closely. Depending on results, referrals may then be made for genetic testing.