Parkruns – where you can meet someone from any walk of life

The criteria for a parkrun include a safe 5km course, a team to run it and a start-up fund. The events are free to all participants 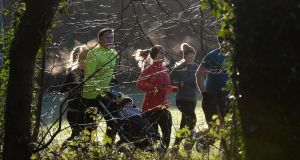 Every Saturday morning at 9.30am, the parks of Ireland are full of runners taking part in their local park-run event. Parkrun expects to reach 250,000 registrations by the end of March, and have already amassed 100 weekly events in Ireland.

“The events are community-owned, they are community-run,” says Matt Shields, Parkrun Ireland country manager. “We respond to communities and we work with them and empower them and assist them, but it’s the community that’s the driving force.

“If somebody comes to us and says we would love to have a parkrun in the local park, basically we’d say to them we’d love to work with you to make that happen.”

The criteria for a parkrun include a safe 5km course, a team to run it and a start-up fund. The events are free to all participants, so parkrun relies heavily on volunteers, funding from grants and, of course, sponsorship.

In Ireland VHI are “partners” with the organisation, and have just announced an extension to their parkrun rewards programme where customers can claim rewards after volunteering or participating in the 5km events. It reflects the growing popularity of the weekly event.

Curious to find out what it is that drives parkrunners out of their beds on a Saturday morning, we asked a few what the attraction is.

Séamus Fogarty was introduced to parkrun when one of his work colleagues, Garda David Cryan, took part in the TV show Operation Transformation.

“I went along and I liked the reception I got – you are immediately made to feel welcome. Your ability isn’t taken into account, no one judges you as such. You are just encouraged to complete the course at whatever pace and at whatever ability you want to. The first week I did it 139 people turned up. That’s 139 people that, over time, you are going to get to know a few of.”

Giffeen Parkrun in Lucan is Fogarty’s local run, and he has made quite a difference to his time since he has begun taking part in the usual Saturday routine of picking a parkrun and turning up with his work colleagues. There is 10 minutes between his slower times and his fastest recorded.

“I didn’t expect to be able to run 5km – it gave me the goal of running regularly and parkrun is a target at the end of the week.”

When a post, on an open forum in Greystones, went up looking for a couch to 5km, a local group formed.

“Initially, I thought it was just to help out with a few people,” says Julie Byrne, one of the volunteer coaches. “And then the first night there was 40 people there. Three times a week we trained, and everyone would show up for the three sessions.

“We decided to go for a target 5km that wasn’t going to be too frightening for them. We picked the Shankhill parkrun rather than a big race they had to enter – with the parkrun you just register and show up.

“It was brilliant for them. We had people doing it that had never done any kind of training or anything before so for them to be able to go up and do the 5km. All the volunteers cheered them on, and loads of their families came up. It was just brilliant for them, and most of them are all still running weekly.”

Not everyone who takes part in parkrun is a newbie. People from all walks of life and athletic ability are turning up, and just using the facility for exactly what they want to get out of it. That’s the whole ethos of the movement.

“Having been involved so much in the racing scene I think it never feels like a race,” says parkrun veteran AJ Cotter. “Everybody is helping everybody else rather than competing, and that’s what I love about it. There is no great sense of pressure. There’s something relaxed about the whole thing.”

Cotter’s completed over 186 parkruns to date, and likes to travel around the different communities with 42 different courses under his belt, his first being in Belfast at the Waterworks, Ireland’s oldest parkrun.

“I was stewarding at Cabinteely one day, and a guy came through the finish line and he was 84. You could meet anybody from any walk of life. It also guarantees that you get out of the bed early and do something good; you feel as if you are set up for the weekend. I like the time as well because it doesn’t feel like it’s impinging on your weekend.”

Whether you are running or volunteering at a parkrun there is always the opportunity to meet new people, and with the growing community all around the world there are more than enough opportunities to get your running fix.

“There is a great social side to it,” say Cotter, “and I just feel that people are willing to help, and everyone is willing to chat. You know what if you were suffering from depression or loneliness or anything like that, for a nod and smile and a friendly word go to a parkrun. It’s the panacea I think – Prozac or parkrun.”