My daughter is a compulsive liar and she is getting worse

Tell Me About It: If you need advice or if you have some for the person with this problem email tellmeaboutit@irishtimes.com 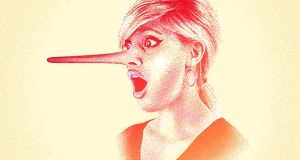 PROBLEM: My daughter is an inveterate liar and is getting worse. She has a lovely husband and wonderful children, two of whom are teenagers.

Neither I nor her siblings enjoy spending time with her as, if you ask her a question, she can never give a straight answer, and if she does you never know whether she is telling the truth. Her children constantly tell me that she lies. It is awful for them to hear her lying, and they pull her up on it.

Her husband is away a lot through his work, so he doesn’t hear her at her worst. If she ever lies in front of him, he pulls her up sharply, but he is not aware of the extent of it or the damage she does to people’s reputations. If I have ever corrected her in the past I am the worst in the world, and she has told many lies to her husband about me. He believes her. She doesn’t have any close friends. Any new friends she has made seem to keep their distance after a while, and I can’t blame them. Who wants to be friends with someone they can’t believe or trust?

It seems to me to stem from two things:

(1) Insecurity and an inferiority complex, which she covers up by trying to impress people (in-laws, acquaintances and so on) by lying about whatever comes up. She always wants to appear to be right and everyone else wrong.

(2) Jealousy of people and their achievements. She doesn’t wish them well but tries to put them down by lying about them. This is so dangerous.

To meet her for the first time, she can be so charming, friendly and impressive. She is academically well-qualified and is very intelligent. She has now started to “misquote” her children: in other words, she lies about what they have said. This is so sad. I feel they will be happy to leave home when they are old enough.

ADVICE: I think you are right in your summation of the problem: insecurity, an inferiority complex and jealousy. You clearly love your daughter and want her to be the best she can be, but she seems to have developed habits of lying, to the extent where she might even believe them herself. However, people distance themselves from her and this must deepen her sense of insecurity, thus increasing her response: more lying.

If confronted or corrected, the chances of her reacting by denial and evasion are very high. Another approach is needed. You say she is intelligent, so she is capable of having conversations where insight is possible. She lacks confidence, and breaking the habit of lying by risking the truth is the way to allow confidence to grow.

If she could understand that all the people who love her want what is best for her and are willing to support her in developing her sense of self, she might feel that change is possible. The problem is that not all the people close to her are in agreement with this suggestion. You feel that her husband has been fed lies about you, and I wonder why she feels the need to do this. Perhaps she senses your disapproval.

The first steps might be for you to challenge your own fears by having a conversation with her husband about your worries and ask for his advice and involvement. It might also be appropriate to involve her siblings and children in this endeavour. Your daughter will only see criticism if all of you do not show a deep faith in her and in her capacity.

It seems that an upfront intervention would only raise her defences, so perhaps you could all engage in courage-building collectively. You could all have open conversations about how you are going to tackle fear in your lives and involve her and ask for her opinion. Then you all begin to act on these aspirations and discuss how you are getting on and what barriers you face. If she sees all of you developing and being braver, she might feel she is not the only person needing improvement and might be encouraged to join you.

We are enormously influenced by the people we spend most time with. What kind of influence do you want to have and what kind of influence are you having currently? Move from criticism to belief in her. You have total control over your influence and can be creative with it. If you catch her out in a lie, perhaps ask questions rather than dismiss the untruth: what is really going on now? Is there another way of looking at this? Your daughter has been living in fear. Like any scared person, she will need coaxing, love and determination to emerge from this place.

A 23-year-old man wrote to Trish that he has never had sex. “I feel like my virginity has become a burden that gets heavier the longer it goes on. I want to meet the right person but I am so afraid of telling anyone I get intimate with about my lack of experience that I never progress past the initial stages.”

You sound like a lovely young man. Being a 23-year-old virgin is not unusual. You are doing something right by waiting to meet someone you can love and trust. I have often heard people talking about the mediocrity of their first sexual encounters, when they were doing it just to get it over with. It can also be an emotional bloodbath, with one person wanting some sort of commitment and the other a one-night stand. Today’s sexual politics among young people are very complicated. However, I know two women who met the loves of their lives online: one on Tinder and the other on Twitter. You need to be out there interacting in social media and face to face without thinking about whether sex will result. When the opportunity to have respectful and caring sex arises, you will instinctively know what to do. Cathy

Walk for the Weekend: Rambling on the white sands of Inishbofin, Co Galway
5

Orla Kiely and the ‘retail apocalypse’ that closed her shops
7

High-calorie, high-protein soup: Making the most of every bite
Real news has value SUBSCRIBE