Ask Roe: I know he genuinely loves me and I love him but I find this situation very frustrating 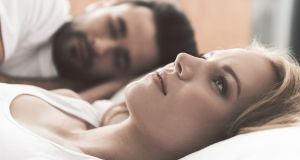 I am in an amazing relationship and I am so happy to have found someone I can truly be myself with. Our sex life is great; I rarely orgasm through penetrative sex which we discuss, and he always ensures that I orgasm another way, usually before he does. However, I’ve noticed that once he comes, everything stops, even if he has brought me close to orgasm right before. I’ve told him how much this frustrates me sexually and upsets me by making me feel he doesn’t care about my pleasure and he has apologised but he says this is just how men are, he loses his ‘drive for sex’. I know he genuinely loves me and I love him but I find this situation very frustrating. Am I being really selfish? Is this just how guys are built physically? Should I be bothered about this at all?

This is frustrating. Not your situation, mine. Because now I have to write the phrase that will destroy the thesis of many people online who desperately want to believe that I am - to use their whimsical turn of phrase - “an irrational man-hating feminazi.” And I truly hate to disappoint. But I must. So here we go:

Like many people who have sex with men, you have discovered the odd little quirk in men’s physicality which can cause them to physically power-down after sex, leaving many a disgruntled partner fuming beside a man now happily snoring in post-orgasmic bliss - or as in your case, a man now happily awake but sexually disinterested in post-orgasmic bliss.

Following orgasm, men experience a refractory period, which is the recovery phase during which it is physically impossible for a man to have additional orgasms. During this time, the penis may be sensitive and further sexual stimulation may actually be painful, which is why men shouldn’t keep trying to have penetrative sex after orgasm, as they could cause themselves injury. (Having sex post-ejaculation is also dangerous if condoms are your primary or sole form of contraception, as they could leak or break.)

It’s thus wise for a man to not have any sexual stimulation immediately after orgasm, and luckily for them, there are a multitude of chemicals helping to make it easier for him to power-down and roll away from you, no matter how irresistible you were mere moments before.

Research shows that during ejaculation, men release a cocktail of brain chemicals, including norepinephrine, serotonin, oxytocin, vasopressin, nitric oxide, and the hormone prolactin. Prolactin represses dopamine, a key chemical in desire and motivation, and is linked both with sleepiness and feelings of sexual satisfaction. It’s thus a de-arouser of sorts, and temporarily decreases men’s desire for sex. Studies have shown that men deficient in prolactin have faster recovery times.

Oxytocin and vasopressin, two other chemicals released during orgasm, are also associated with sleep. Oxytocin, which is commonly known as “the bonding chemical” or “love hormone” as women experience it both after sex and during maternal activities such as childbirth and breast-feeding, can also cause relaxation in men, again contributing to the contentedly unaroused state after ejaculation.

Now, that’s the chemical side, let’s talk about communication. Two things concern me; that you’re not listening to and respecting your partner when he clearly tells you what his physical and emotional limits are around sex, and why you are tying up your pleasure in his orgasm.

By listening to you explain that you can’t orgasm through penetrative sex, ensuring you orgasm through other activities, and suggesting that you orgasm before he does, your partner he has already shown that he respects and cares about your needs and pleasure. By ignoring him when he tells you he physically and psychologically loses his sex drive immediately after orgasm, you are not returning the same sense of care and respect.

And I’m not sure why. You seem to be trying to impose a somewhat arbitrary order of events onto your sex life, where you feel like he should orgasm before you do - or that if you want an orgasm after he ejaculates, he has to give it to you.

You have a man with natural physical limits who is more than willing to bring you to orgasm before he does. Respect him, and enjoy it.

Roe McDermott is a writer and Fulbright scholar with an MA in sexuality studies from San Francisco State University. She’s currently undertaking a PhD in gendered and sexual citizenship at the Open University and Oxford