Medical Matters: To vape or not to vape? 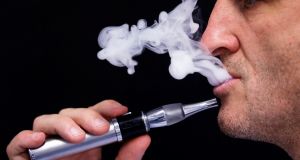 Invented in 2003 by Chinese scientist Hon Lik, the electronic cigarette delivers nicotine through an aerosol of propylene glycol and glycerin, rather than via the combustion products of dried tobacco leaves. Photograph: Regis Duvignau/Reuters

Are you one of 700,000 Irish people who smoke? Are you planning to quit this year? If so, you might have been thinking about nicotine replacement as an aid to giving up. Smokers are increasingly looking to electronic cigarettes as a bridge to achieving complete smoking cessation.

E-cigarettes are known in the scientific world as electronic nicotine-delivery systems. Although often lumped together, they are a separate entity to personal vaporisers (PVs) – these do not involve “ignition” but are more like the inhalers used by people with asthma and other respiratory ailments. PVs are not electronic and do not generate heat or vapour.

The distinction is emerging as a regulatory issue. The EU’s second tobacco products directive will come into effect next May. It will mean that e-cigarettes will need to be regulated under legislation similar to tobacco legislation or they will need to have a medical device licence, meaning a detailed regulatory process.

British American Tobacco (BAT) has received a medical device licence for a PV-type product from the UK’s Medicines and Healthcare Products Regulatory Agency (MHRA) that will allow the device to be marketed as a smoking cessation aid. It will be interesting to see if the tobacco giant’s device will now be approved for prescription as part of a smoking- cessation programme.

Invented in 2003 by Chinese scientist Hon Lik, the electronic cigarette delivers nicotine through an aerosol of propylene glycol and glycerin, rather than via the combustion products of dried tobacco leaves. Battery-powered, the earliest devices incorporated an LED which glows red like a cigarette when the user inhaled. Despite subsequent changes in size and design, e-cigarettes are essentially made up of a chamber containing soluble nicotine, an atomiser and a sensor which activates a heating element causing the nicotine to be vaporised ready for inhalation. The consumer is referred to as a “vaper”.

Two key issues face anyone considering moving from being a smoker to a vaper: efficacy and safety. Unfortunately there is a dearth of definitive research to be certain about either. The ground has been further muddied by something of a turf-war between tobacco-control advocates and those who see e-cigarettes as an opportunity for harm-reduction.

Tobacco-controllers follow what could be described as a “quit or die” philosophy while a separate public health camp is willing to explore the potential benefits of vaping in the belief that e-cigarettes are safer than traditional tobacco.

Questions driving this debate include the impact of long-term nicotine use; the health consequences of contaminants in e-cigarette vapour; and whether vaping could be a route to traditional tobacco use, especially among children.

However, in the understandable absence of long-term studies, it is difficult to compare abstinence with e-cigarette use when it comes to health outcomes. But there is a fear among some experts that high levels of regulation will make e-cigarettes uncompetitive, leaving a monopoly for traditional tobacco products.

Last year, Public Health England advised smokers to switch to vaping; it said vaping was at least 95 per cent less dangerous than smoking or, conversely, that smoking was 20 times more dangerous than using e-cigarettes. Certainly the known carcinogens produced by tobacco smoke are absent from nicotine vapour. However, a recent US study found that e-cigarette vapour damaged the DNA of human cells in a way that could lead to cancer.

A Cochrane review published over a year ago found limited evidence from two trials that e-cigarettes help smokers to stop smoking long term compared with a placebo device. Citing a lack of definitive research, the review concluded, “ECs appear to help smokers unable to stop smoking altogether to reduce their cigarette consumption when compared with placebo ECs and nicotine patches” and “no evidence emerged that short-term EC use is associated with health risk”.

See Quit.ie for advice and support with smoking cessation.