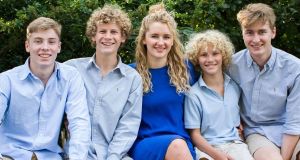 Kate Macklin's children (Evistons) were born in Ireland but raised and schooled in Italy.

Emigration has been a major part of Irish society for centuries. Every year, our diaspora take off for far-flung corners of the globe, to set up new lives abroad. A daunting task, but one where Irish people have traditionally flourished.

Perhaps more daunting is emigrating to a non-English speaking country. Even if you can speak the language, conducting any and all daily tasks and business through that language, and using very little – if any – of your native language, makes the idea of emigrating seem more difficult.

And what if children are added to the equation?

If you are an Irish expat living in a non-English speaking country, how do you decide which language should be your child’s primary one?

Should you strive for them to be bilingual, or have one language as the dominant one, and the other just used in school, or socially?

In 2009, Jacklyn Chantry from Cork moved to Aarhus, Denmark, as an Erasmus student. She never returned to live in Ireland, having been offered a permanent job from her work placement, and her partner Mark followed her over in 2010. In 2012, their first daughter Róisín was born, and in 2016 they welcomed a second daughter, Cara.

Jacklyn is now fluent in Danish and works through the language, while Mark also uses Danish in his work. Their daughters attend local creches and playschools, and are educated through Danish. “It was difficult to learn, but I think it’s the fifth or sixth hardest language in the world,” says Jacklyn. “I should have gone to Spain or somewhere!”

When their older daughter Róisín began speaking, Jacklyn and Mark spoke both English and Danish in the home, while Róisín spoke Danish at playschool. As a result of this mix of languages, there were some words in English, and some in Danish, for which she simply didn’t know the word.

Eventually, the school recommended they speak only English at home to Róisín, to ensure she would be able to speak fluently in both languages. “They don’t want us to mix the two languages, because it’s very important that your native language is perfect, for you to learn a new language. So they recommended that we speak just English at home.”

Despite both of their parents’ first language being English, and their parents speaking English to them at home, when interacting with one another at home, Róisín and Cara speak Danish, which is admittedly “weird” for Jacklyn. “We have a lot of ex-pat friends, some Dutch, Portuguese, Spanish, and all their kids play together, and they all speak Danish, because that’s their common language – they don’t all speak English.”

At playschool, or ‘bornhave’, there is a special language class for bilingual children once a week, called “tildig indgriben”, directly translated as “early intervention”. “She learns the words like ‘in between’ and ‘because’, and other conjunctions, ‘of’ and ‘and’ and that, in that special class. She’s been going to that since she’s been a year old.”

Róisín recently underwent a language screening test ahead of beginning primary school, or ‘folkeskole’ in September. “All bilingual children have to do it. It’s like the Irish oral where you have to a bit of reading, and listening, and repeating, and then if she needs assistance in school with her Danish, then she gets a special helper.”

“We speak weekly to my family via Skype and Viber so my girls’ Cork accent is as strong as their cousins, even though they never lived there.”

When speaking Danish, Jacklyn has noticed the girls’ voices change in a big way. “They have a completely different accent and sounds when they speak Danish. The whole tone and sound of their voices change.”

Kate Macklin and her husband Dermot have lived in Italy for more than 25 years, and currently reside in Salsamaggiore Terme. They have five children, aged between 15 and 24, and while all of them were born in Ireland, they have all been raised and schooled in Italy.

“I went home to have them in Ireland, but they have all grown up here, and they have all gone to the local school. They all speak Italian like Italians.”

Every member of the household – Kate, Dermot and their five children – speaks both fluent English and fluent Italian. But, at home, they speak only English. “We made a conscious decision when they were small to use only English at home, because we knew that the Italian would come from school. They were always in creches and pre-school to make sure that their Italian would be up to scratch by the time they went to school. School is where you become like the Italians I suppose.”

Even though they also speak Italian, because of their accents, she and her husband are still considered outsiders to an extent, maintains Kate. “My husband and I speak Italian fluently, but we’re always the foreigners with the foreign accents, while they [the children] are locals for all intents and purposes.They think in both languages. They don’t think in English and then translate it to Italian, they think equally in both, I think that gives them an awful lot more flexibility.”

There is an international school in the nearby town of Parma, but, ultimately, Kate and Dermot decided not to send their children there. “The travel time was too much, and we’ve been involved in lots of sports, so they’ve been on lots of sporting teams here locally as well.”

Their three oldest children went on to attend university in Dublin, and lived together there. “Even when the three older ones lived together in Dublin while they were in college, I think most of the conversations were in Italian among themselves. It depends on the subject – if they’re talking about school or their friends, they’ll speak in Italian, if they’re talking about the Irish rugby team, or the horses, they’ll speak in English.”

However, there is one instance where their Italian comes to the fore. “They tend to fight in Italian. When they were small and we’d sometimes leave them with their grandparents in Ireland, everything was in English until a row broke out, and it would always be in Italian, but the grandparents couldn’t sort it out because they couldn’t understand what they were saying!”

Karin Kelly was raised in Sweden by an Irish mother and a Swedish father. Growing up, Karin spoke only Swedish at home, learning English at school and from Irish relatives.

“I made a decision when Karin was very small,” explains her mother, Breda, “that Swedish was going to be their primary language, and that they were going to go to school in Swedish, so Swedish was the most important. But we played a lot in English and used a lot of English phrases, and they were visiting Ireland at least once a year, even when they were very small.”

At around seven or eight, both Karin and her sister were well able to communicate with Irish relatives, and when they began learning English in school at 10, their English was far superior to their classmates. However, it wasn’t until they were in their early teens that Breda feels their two main languages, Swedish and English, became equal. “I felt it was right to have a predominant home language, and that the other would come along.”

A few years later, Karin made the decision to switch from Swedish to English as her primary language. “I switched when I was a teenager,” Karin says. “It was my choice when I was 15 or 16. I started speaking English at home with my mother, 80-90 per cent of the time.

“My sister and I still speak Swedish and usually if we’re around my mum we’ll speak Swedish with her. I think it was part of finding out who you are and your identity, and I was very close to the Irish culture, and it was very different to growing up in Sweden. It was a bit of a test for me but I chose to continue on that path, without my mother choosing for us or for me.”

Karin attended university in Ireland, has since lived in the UK, and currently lives in Italy. While she still speaks Swedish with her sister, and sometimes with her mother, she feels she needs to practise her Swedish to keep it up. “I haven’t lived in Sweden for 15 years at this point, my Swedish is actually deteriorating a little bit. It’s funny because it is actually my first language, but I don’t use it very often. I think in English, and I can express myself much more eloquently in English, partly because English is much more comprehensive as a language than Swedish, but also because I’m just more used to it.”

Yes, having ‘just’ the one child can make for a wonderful family dynamic
8