‘I want everyone to know that blood clots can affect anyone’

Ann Marie O’Neill had several brushes with death due to blood clots. Now, she want everyone to know the warning signs 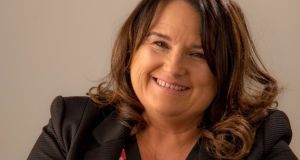 Ann Marie O’Neill: “We want to increase knowledge and understanding of blood clots amongst patients, medical professionals, the Government and the public.”

Recently, the HSE launched a new directive to raise awareness of the fact that 11,000 people are affected by blood clots every year in Ireland and they are the biggest cause of preventable deaths.

Not knowing the signs of an imminent clot is one of the main reasons for these statistics. It can happen to anyone – young or old.

When new mother Ann Marie O’Neill suffered from excruciating pain after an operation in 1995, she had no idea she was suffering from a pulmonary embolism (clot). Thankfully, it was caught in time, but she didn’t expect it to happen again – several times.

“When I was pregnant in 1995, I also I had gall stones,” says the mother of three. “I delivered my first son in February and in May had surgery to remove my gall bladder. But within days I was back in theatre with a bowel obstruction due to adhesions – so I had two surgeries in two weeks and then a hospital bug. I was also dehydrated and immobile and a week later I couldn’t breathe without a really sharp pain in my chest. [After investigation] I was diagnosed with a pulmonary embolism (PE) and prescribed anticoagulation drugs for six months.

“I left hospital after six weeks, with no real understanding of what had happened to me and why, or that it may have been life threatening and could happen again.”

Five years later, the Dublin woman began to experience chest pain once again and although she was worried she may be suffering from another clot, didn’t realise how dangerous it could be, so carried on with what she was doing and tried to ignore the pain. However, two weeks later, it became so bad she had to go to hospital where her suspicions were confirmed.

“When I started getting chest pain again, I tried to ignore it as even though I had my suspicions of another PE, I didn’t know it could be fatal,” says O’Neill. “Two weeks later, I was driving on the M50 to go shopping in Blanchardstown with my two older boys, Eoin and Kevin, when the pain became acute and I had difficulty breathing.

“So I pulled in and called my husband and asked him to meet me in the nearest hospital. Tests confirmed that I had another PE and I was admitted for a week and put on anticoagulation drugs indefinitely. I was beginning to think I might have a problem but nobody sat down and explained exactly what was happening, that it may happen again or how I could protect myself going forward.”

In 2001, O’Neill became pregnant again, which increased her risk of another blood clot. Due to her history, she was monitored throughout her pregnancy and has been deemed at risk of further complications ever since.

She believes not enough information is given to post-operative patients who may be at risk of a similar fate.

“For the duration of my third pregnancy, I was looked after by the truly amazing team in the National Coagulation Centre and put on daily injections of anticoagulation treatment,” she says. “My third son was born fit and well and I continued my anticoagulation therapy indefinitely and was advised not to get pregnant again.

“Then, in 2012, I needed a procedure which involved an injection into my femoral artery and resulted in another blood clot at the injection site. I experienced the excruciating pain of the blood supply being suddenly stopped – but I believed the doctor when he said I was fine and it wasn’t a clot. I was given painkillers and discharged – and only for a nurse friend noticed me limping a few days later and advised me to go back to the hospital, I would probably not be here now.

Blood clots, or venous thromboembolism (VTE), consist of deep venous thrombosis (DVT) in the legs, which may travel to the lungs causing a pulmonary embolism (PE). According to the HSE, at least 60 per cent of all blood clots occur during, or in the 90 days after, hospitalisation and about 70 per cent of these are preventable.

Two decades after her brushes with death, O’Neill says the lack of information she received put her life on the line several times.

“I know I’m lucky to be alive and am aware of the signs and symptoms to look out for,” she says. “I want everyone to know that blood clots can affect anyone, male or female, young or old, fit and healthy and they can be fatal if we don’t know what to look out for. A little knowledge can save lives. I would like the conversation to be opened up between patients, their families and health professionals so we can all work together to protect our lives with that crucial knowledge – as in many cases, blood clots are preventable.

“I survived three potentially fatal blood clots but live every day with the side effects. I can’t walk very fast or run and stairs and hills are difficult for me. I make sure to stay hydrated and keep as active as I can and know how crucial it is to seek immediate medical attention if I suspect I have a blood clot again. Knowing what I am dealing with and what to do makes me feel safer.”

“The HSE has been making great strides in preventing blood clots,” says Ciara Kirke, HSE clinical lead for medication safety. “During a year-long improvement collaboration, teams in 27 hospitals improved blood-clot prevention, resulting in a one-third increase, or 34,000, more patients getting the correct prevention for them per year. Over 100 healthcare professionals attended training and participated in improvement projects locally.”

Ann Marie O’Neill welcomes this move and says information is crucial to saving lives so in 2016, set up thrombosisireland.ie to raise awareness.

“Thrombosis Ireland aims to give support to patients and their families,” she says. “We want to increase knowledge and understanding of blood clots amongst patients, medical professionals, the Government and the public, as well as improve treatments, services and facilities available to those affected by blood clots or anticoagulation therapy.

“By empowering people affected by blood clots to take control of their own health in an informed manner they can live more confident and independent lives.”