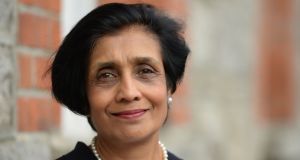 Jay Shah: “I have lived in this country 30 years now and it is time to give back.” Photograph: Alan Betson

Fashion agent Jay Shah, who has been a gym-goer for the past 35 years, thought it was a combination of getting older and working too hard that had her feeling unlike her usual energetic self.

But she did go to her GP, who found her pulse rate was low. Subsequent tests culminated in the news she needed heart surgery to avert the likelihood of total cardiac failure.

The mitral valve, which lets blood flow from one chamber of the heart, the left atrium, to another called the left ventricle, had collapsed, causing regurgitation of blood within the heart. The resulting reduced blood flow around her body was what was making her both look and feel unwell.

There were two choices, cardiac surgeon Michael Tolan told her: open-heart surgery or, provided she proved a suitable candidate, a new minimal invasive procedure, for which he had trained abroad and was pioneering in this country, at the Mater Private Hospital in Dublin.

“The difference between the two surgeries is quite drastic,” Shah says. “In open-heart surgery, they open your breast bone and then they have to pull the ribs out a bit to get into your heart. With minimal invasive surgery, it is what it says, to get to your heart they go through the side of the body – with specialised equipment and long instruments, they go under your breast.”

The healing process is much easier with the latter and recovery time is expected to be cut by half. Exterior scarring is much less and is to the side rather than at the front of the body.

No wonder Shah says now, more than 2½ years later, that she was “blessed” to meet Tolan and become one of his early cases in using this new procedure, in April 2016.

She is also aware of the privilege of being a private patient, as this particular minimal invasive surgery is not available in the Irish public hospital system. That’s something Kenyan-born Shah (61), enjoying good health again, is now determined to change.

“It shouldn’t be only if you have money or health insurance that you have a choice,” she says. It made a big difference psychologically to her to have that option. “It made it so much easier for me [knowing] I am not going to be cut from the front, it is all going to be from the side.”

Shah is spearheading a campaign to raise the €80,000 necessary for St James’s Hospital in Dublin to buy the equipment to enable Tolan to carry out the minimally invasive surgery on both public and private patients there.

“My outlook has changed,” she says. “I have lived in this country 30 years now and it is time to give back.” When she and her husband, Samil Shah, first came here they were agents for Pepe Jeans – now he owns the Skechers franchise, they are agents for a number of brands including Guess and they have raised two children, Ciara and Ciaran.

Investment in the latest technology not only benefits patients but it is also vital, Shah argues, to keep young, progressive doctors working here.

The lead cardiac surgeon at St James’s, Tolan has specialised in mitral surgery. “The mitral valve is kind of two sheets on guy ropes and the guy ropes can either lengthen or suddenly rupture for a variety of reasons – generally we never know why,” he explains. It can happen in people young and old.

Tolan trained in new technology-assisted techniques in Lyon in France and Aalst in Belgium. Then the Mater Private bought the equipment he needed to carry them out here.

Cardiac surgeon Prof Jean-François Obadia came over from Lyon to assist Tolan and colleague Jim McCarthy to do the first few cases, since when almost 100 more private patients have been treated this way.

“It is what is traditionally called ‘keyhole surgery’ but it isn’t that ‘keyhole’,” Tolan explains. “It is still a major impact on your body; all your blood is being put through the bypass machine and there is a lot of cutting and sewing inside, it is just not on the outside.”

So surely it would make financial sense for the cash-strapped public-health system to juggle budgets to invest in such technology?

“It seems silly really but that is not the way the Irish health service seems to work,” says Tolan. “New procedures come into the private sector first and after that, when the demand builds up, it comes into the public hospitals.”

Surgeons are trying to innovate and bring in new, minimally invasive procedures, he explains, but the constraints of budgets in public hospitals means there has to be a waiting list for innovations.

“You just put your name down and keep making business case after business case and eventually you would get there.” But thanks to Shah’s lead on the Heart Appeal, in conjunction with the St James’s Hospital Foundation, this will short-circuit that process.

They have more than €22,000 raised so far; there has been a campaign through Skechers shops and a couple of special events are being planned, as well as donations being sought through the foundation.

Tolan adds he is “tremendously grateful” to his former patient. As will be all those who will need this surgical procedure – anything between 200 and 300 a year in Ireland – and who don’t know it yet.