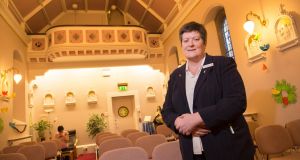 Sr Julie Buckley, chaplain in Temple Street hospital, Dublin: ‘Seeing parents broken after the death of a child is the worst part of the job. Their world has ended and they have to try to pick themselves up and build a new life.’ Photograph: Dara Mac Donaill

I started off nursing and did my training in the Richmond Hospital, in Dublin, returning to Cork, where I’m from, to do midwifery. I worked as a staff midwife in the Erinville Maternity Hospital. Because there wasn’t much work in midwifery at that stage, I went back to general nursing in the Bon Secours in Cork and, in 1991, I entered the Reparation Convent, at the age of 28.

Becoming a nun was the last thing on my mind when I left home but I knew there was something missing that no amount of socialising could fill. In nursing, you see people dying and you see the miracle of new life. I felt there had to be more to life than just the tangible, the here and now.

You don’t have to be in religious life to be a chaplain. The two chaplains who work with me are married women with families.

In 2011, I completed a masters in bereavement studies through the Irish Hospice Foundation and the Royal College of Surgeons.

I’ve been working in Temple Street since 2003. No two days are the same. I love my work which involves routine work and emergency work.

I live in Swords. To start work at 8am, I usually get in at 7.20am. If nobody disturbs me, I go into the chapel, turn on quiet music and meditate to get into the centre zone of myself. I say my morning prayers.

I also get to meet parents before work starts. A lot of them come in and out of the chapel and light candles. It’s a beautiful place. After spending half an hour gathering myself for the day, I go to the office.

If I’m not called to an emergency, I check the diary to see what’s on. I could have a meeting at 8am. Once a month, we have a meeting of heads of the departments. Every second Tuesday, the ethics’ committee meets. I sit on that committee. We could be looking at research proposals. We have to see that they are scientifically robust and there are no ethical issues.

We also have to ensure that staff members are not bombarding the same cohort of people to take part in research. We don’t want people to be compromised. Our aim is to do good and to do no harm.

I have to do a lot of reading, writing reports and administration work such as working out the overtime hours the chaplaincy has incurred. I prefer being with people but no department can run well without administration.

When a child dies, we offer a service to the family. It could include reflective music. It doesn’t have to be specifically religious. The people who come in here often wouldn’t be particularly religious but they’d be reflective.

If a child comes in and is not breathing, the doctors and the anaesthetist put out a “code blue” bleep which means we have to stop what we’re doing and get over there straight away. You have the people who get the child breathing again while my job is to look after the parents and any children they have with them. They’re very traumatised.

It’s a terrible thing to witness somebody collapsing. Thank God most of the time, the doctors get the babies back.

On a recent Thursday, Dublin Fire Brigade came in with a lifeless baby. It was probably a cot death. The mother was screaming and running into walls. They can go crazy for a short while. It’s the worst thing that could happen to anybody. It’s about trying to contain the situation.

This means trying to get the family into the mortuary as quickly as we can because that’s a contained unit. You have to move swiftly in a situation like that to defuse the absolute hysterics. Then people kind of slump. They could fall to the ground. You don’t know how people are going to react to this awful news.

My job can be very stressful. There’s a lot of emotional outage that comes with it, certainly for the after-hours calls. We work eight-hour shifts and we can be on call on certain nights of the week.

We’re never called for a good reason. A child has died or they’re dying or there’s a child being transferred from another hospital and they’re critically ill. Or there’s a newborn baby going to surgery. That baby may not make it and the parents might want him or her to be baptised.

The job takes its toll. In the chaplaincy, there are two of us who are full-time and a there’s part-time post. After our monthly team meeting, we have peer supervision. I honestly believe that unless there is some kind of decent defusing and processing, you could be burnt out in this job. We have a “buddy” system where we look out for each other.

If there’s a particularly difficult case, we talk about it and see what we can learn from it. There’s no judgment. We might say that it wasn’t handled the best way.

The second prong is more difficult. We talk about the impact [the case] had on us. You have to allow yourself to be vulnerable in front of your colleagues. Our team of chaplains is small. We each go for personal external supervision with a professional, every four to six weeks. We would see a therapist or a counsellor. I go to a psychotherapist so it’s really looking at the whole thing.

Obviously, confidentiality is important. I don’t talk about other people but I will talk about the impact of situations on me, how the job is impacting on me, where I am now.

Seeing parents broken after the death of a child is the worst part of the job. Their world has ended and they have to try to pick themselves up and build a new life.

In the current climate, infant care is very difficult because more is being asked of staff. The complexity of care has increased dramatically in the past couple of years while staffing levels have dropped. People are stretched, personally and professionally. I do a lot of staff support in my job including a debriefing with the intensive care staff every month or six weeks.

I’ve never doubted God’s existence but I do query the amount of suffering that goes on in the world and why a young child is called home to heaven.

It’s not logical and it’s so unfair because these children are hugely loved. Parents would go in their place if they could.