GP Pat Harrold has found out he can’t take gluten, so beer – aka bread in a jar – is off the menu 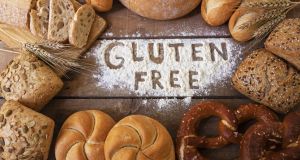 When you become coeliac you realise how often you think of food, confront food or have food pushed at you by advertising. Photograph: iStockphoto

A rainy Monday morning in November is as good a time as any to find that your life has changed forever. When I turned on the computer and saw that a test result had come back in bright red, signalling an abnormality, and that the name beside the result was my own, I was not surprised. The test result was a coeliac screen. And I had scored a resounding hit.

The chances of being coeliac in Ireland are about one in a hundred. Mine were a good bit higher than that, as I have a good deal of Galway blood, and it is common in the west, like fuchsia. Furthermore, my daughter Katie had just been diagnosed, so I was duly tested as a first-degree relative. I had found that bread and beer (which is bread in a jar) gave me a bit of heartburn, but otherwise I had no symptoms at all.

So I gave up gluten and felt about 20 years younger within a few days. I also lost a stone in weight. My energy levels improved spectacularly. As the song goes, you don’t know what you’ve got till it’s gone.

Like many another, I did not know how to describe the condition. “I am coeliac” sounds wrong, and “I have coeliac disease” makes people wonder if you have something catching. “I can’t take gluten” sounds a bit better.

Some people are coeliac, some gluten intolerant and others give up gluten up for vague reasons. Katie tells me a card-carrying coeliac scorns those who make a fuss about forgoing gluten in their main course and then reward themselves with cake. It does seem unfair to those of us who have been handed a life sentence that some people give up gluten as a fad. And it is no joke to give gluten to a real coeliac – many get seriously ill. I am not too bad – while I will know when I have been glutened, it usually passes off without much bother.

When you become coeliac you realise how often you think of food, confront food or have food pushed at you by advertising.

I feel so much better that it is easy to stay off gluten. And I don’t mind making a show of myself in restaurants by asking about gluten content. Every time I become a coeliactivist I feel I am doing it for some shy teenager who does not want to stand out from the crowd. The lovely canteen staff at Nenagh hospital now tell me what I can have as soon as I stroll over. In restaurants I find it quite easy to keep my eyes on the menu number code or a GF sign and not look at the other options, rather in the way that you whizz around a bypass without seeing the town.

Food is one thing, drink is another. Like a good GP, I consulted an expert. James Kelly, owner of Una Powell’s bar in Nenagh, who knows his drink, is educating me in the ways of his formidable top shelf. I landed into his pub with a righteous thirst one night after a taxing doctor’s meeting. I asked for a posh G and T, and James set too with a will. We had crushed ice and ginger and sprigs of foliage in a splendid goblet. I had just lifted it to my lips when I was joined at the bar by a lusty crowd of professional sheep-shearers. It would have done your heart good to see the way these men sank pints of beer, while I sat in their midst daintily holding my goblet of gluten-free. For once I didn’t explain.

I am lucky. I am not like some poor wee child who becomes violently ill if they are glutened. I could have gone the rest of my life not knowing I was coeliac but I am better off knowing. It could have been much worse. I have stood beside the coffins of too many of my friends, and too many contemporaries have developed serious illness for me to complain. If this is the card I have been dealt, I intend to play it cheerfully and with style.

Dr Pat Harrold is a GP in Nenagh, Co Tipperary.

‘I do the work and he takes the bows’: The women who use fake male assistants
7

Does sitting down fool our bodies into thinking they weigh less?
8