I am allergic to Christmas. No really, I am 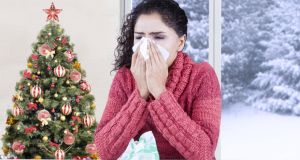 Being “allergic to Christmas itself”, as one colleague nicely put it, isn’t all that bad. Photograph: Thinkstock

I was born into “the big Christmas tree ban”. There are strictly no real trees allowed in the Ruxton household, originally thanks to my brother. He’s the type of person who should live in a bubble and eat bland, strictly boiled things – pine trees are at the top of a long list of allergies.

Our Christmas tree prohibition began in the former Socialist Federal Republic of Yugoslavia in 1990. Yep, that old chestnut. My older brother had a severe asthma attack on a family holiday. The cause? A reaction to the surrounding pines. Around that time, trips to horse farms were also ruled out and a mandarin in your lunchbox became a thing of fantasy.

As it happens, natural Christmas trees also turn me into a blubbering, wheezy, handkerchief of a man, so I never complained about the pine blackout.

Being “allergic to Christmas itself”, as one colleague nicely put it, isn’t all that bad. Sure, I don’t have many pine cone fights or talk endless nonsense about how “that Christmas tree smell” is what “really makes Christmas”. All you really need is an artificial tree (at a distance, because it might be dusty) and a solid bit of Christmas imagination.

“The winter curse is that if you have a background allergy, you’re nursing that into the winter,” he explains. “Then, you have the change in temperature and the colder, damper air. That, combined with the usual winter viruses, means you do tend to get a flare up of respiratory problems. It’s an unfortunate perfect storm for some poor people.”

Hay fever, for one, affects about one in five people in Ireland and is triggered by grass and tree pollen or other spores. Although there can be mould on trees that exacerbates hay fever, it isn’t the main cause of irritation.

Carson says “there is a very definite pine-tree allergy”, which affects the nose and sinuses, “spilling” down into the lungs, causing wheezing and frequent reaching for the Ventolin.

The symptoms range from sniffles to contact eczema and swelling of the skin. Even that vaunted “Christmas smell”, in itself, can set things off as pine molecules can carry in the air.

“What could be a pleasant Christmas visit can sometimes turn into a bit of a nightmare” for many people, the doctor graciously reminds me.

So, what’s to be done? An artificial tree helps, but storing it in the attic increases the likelihood of dust build-up. If you absolutely have to have a real tree, the older the better.

“Most of us buy Christmas trees from the side of the road when they’ve been cut fresh,” says Carson, but “if they have been left for maybe a week and the sap has dried and the pungent smell is not as strong, sometimes you can get away with it.”

Those with nut allergies are particularly at risk at Christmas, Carson says. Peanut allergies are incurable and tend to be life long, with about 80 per cent of childhood cases leading to life-long allergies.

The journey from contact with a peanut to full anaphylactic shock can occur in as little as five minutes. It begins with a tingling in the mouth and progresses to palpitations and feeling dizzy, weak and clammy. Internal swelling can obstruct breathing, then blood pressure drops, putting strain on the heart and organs, eventually leading to loss of consciousness and sometimes death.

Rinsing your mouth won’t work once an allergen is ingested, Carson says. But EpiPens, which use adrenaline, can “abate the tidal wave” of an acute reaction, if they’re used in time. EpiPens are more widely available following legislation earlier this year after the death of Emma Sloan (14). Her mother tried to get an EpiPen for her but was refused because she did not have a prescription.

“Even if they’re overreacting [by using the EpiPen] and it was never going to be a dangerous allergic reaction, that’s no problem,” he says in terms of the effect on the body.

Death from anaphylactic shock is “fortunately very rare”, but the key with any allergy is to be wary in the places that you cannot control, especially when house-hopping at Christmas. With children who have allergies, it’s important to “drill into them” that “every environment is dangerous until proven otherwise”.

So this Christmas, spare a thought for those who can’t dance happily around the tree or bite into a lump of store-bought cake with carefree abandon. Because we don’t necessarily hate Christmas. It just hates us.

What makes Vienna the ‘most liveable city’ in the world?
10

Happy knits: Winter woollies to give you the warm and fuzzies
Real news has value SUBSCRIBE