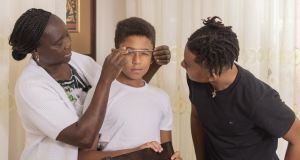 When Esaïe Prickett sat down in the living room with his mother, father and four older brothers, he was the only one wearing Google Glass.

As Esaïe, who was ten at the time, and is 12 now, gazed through the computerised glasses, his family made faces – happy, sad, surprised, angry, bored – and he tried to identify each emotion. In an instant, the glasses told him whether he was right or wrong, flashing tiny digital icons that only he could see.

Esaïe was six when he and his family learned he had autism. The technology he was using while sitting in the living room was meant to help him learn how to recognise emotions and make eye contact with those around him. The glasses would verify his choices only if he looked directly at a face.

He and his family tested the technology for several weeks as part of a clinical trial run by researchers at Stanford University in and around the San Francisco Bay Area. Recently detailed in The Journal of the American Medical Association, Paediatrics, the trial fits into a growing effort to build new technologies for children on the autism spectrum, including interactive robots and computerised eyewear.

The Stanford study’s results show that the methods have promise and indicate that they could help children like Esaïe understand emotions and engage in more direct ways with those around them. They could also measure changes in behaviour, something that has historically been difficult to do.

Experts believe that other new technologies may help in similar ways. Talking digital assistants such as Amazon’s Alexa, for example, could help children who misuse their pronouns. But even as these ideas spread, researchers warn that they will require rigorous testing before their effects are completely understood.

Catalin Voss started building software for Google Glass in 2013, not long after Google unveiled the computerised eyewear amid much media hullabaloo. An 18-year-old Stanford freshman at the time, Voss began building an application that could automatically recognise images. Then he thought of his cousin, who had autism.

Growing up, Voss’ cousin practiced recognising facial expressions while looking into a bathroom mirror. Google Glass, Voss thought, might improve on this common exercise. Drawing on the latest advances in computer vision, his software could automatically read facial expressions and keep close track of when someone recognised an emotion and when they did not. “I was trying to build software that could recognize faces,” Voss said. “And I knew that there were people who struggled with that.”

At the time, the brief moment Google Glass spent in the national spotlight was already coming to an end. Google stopped selling the device to consumers amid concerns that its built-in camera would compromise personal privacy.

But Google Glass lived on as something to be used by researchers and businesses, and Voss, now a doctoral student, spent the next several years developing his application with Dennis Wall, a Stanford professor who specialises in autism research, and others at the university.

Their clinical trial, conducted over two years with 71 children, is one of the first of its kind. It spanned everything from severe forms of autism, including children with speech impairments and tactile sensitivities, to much milder forms. Children who used the software in their homes showed a significant gain on the Vineland Adaptive Behaviour Scales, a standard tool for tracking the behaviour of those on the autism spectrum, Voss said.

The gain was in line with improvements by children who received therapy in dedicated clinics through more traditional methods. The hope is that Voss’ application and similar methods can help more children in more places, without regular visits to clinics. “It is a way for families to, on some level, provide their own therapy,” Voss said.

Jeffrey Prickett, Esaïe’s father, said he had been drawn to the study because he had known it would appeal to his son, who enjoys using iPad apps and watching movies. “He does fine interacting with people,” Prickett said. “But he does better interacting with technology.”

Prickett found it hard to judge whether the Google device helped his son recognise emotions, but he saw a marked improvement in Esaïe’s ability to make eye contact.

Heather Crowhurst said she had experienced something similar with her eight-year-old son, Thomas, who also participated in the trial. But Thomas was not entirely captivated with the digital therapy. “It was kind of boring,” he said.

The parents are aware of the technological intervention, so their observations may not be reliable

The concern with such studies is that they rely on the observations of parents who are helping their children use the technology, said Catherine Lord, a clinical psychologist at the University of California, Los Angeles, who specialises in the diagnosis and treatment of autism. The parents are aware of the technological intervention, so their observations may not be reliable.

A device may be a poor substitute for real human interaction. But the strength of these technologies is that they can repeat tasks time and again, without getting tired or bored or angry. They can also measure behaviour in precise ways, said Pam Feliciano, scientific director of the nonprofit Simons Foundation Powering Autism Research.

For these reasons, Feliciano also sees promise in Amazon’s Alexa. Her 14-year-old son is on the spectrum and struggles with his pronouns. He sometimes calls himself “you,” not “I.”

Her task is to correct him each time he makes a mistake. But she’s human and gets tired. She does not always remember. A device such as Alexa could help, she said, provided that researchers can show it is reliable and effective. “The technologies are there,” she said. “It is just a matter of the right technologists working with the right clinicians.” – New York Times

Covid-19: Mother and daughters moved into home to tend elderly

My misanthropic father would have embraced social distancing
4

A hurley as a sex toy? Ah would you camán out of that
9