Heartfelt advice on when to say ‘When’ 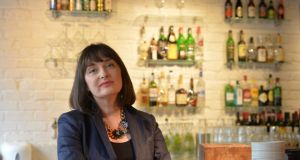 Ann Marie Hourihane in Cinnamon cafe, Ranelagh in Dublin: ‘Perhaps the problem about continuing to live without alcohol was that I just wasn’t terrorised enough; my relationship with alcohol wasn’t that fraught.’ Photograph: Alan Betson

In Britain the Macmillan Trust cancer charity has calculated that the average drinker spends an average of 315 days hung over; that’s almost a year, party people. And a little bit depressing.

Here, the Irish Heart Foundation (IHF) is running a new campaign this month, “Your Heart Can’t Drink Like You Can”. It is unusual in highlighting the damage that alcohol can do to your heart – damage that can include raised blood pressure, an enlarged heart, an increased risk of stroke and an irregular heart rate, even in young people.

The “Your Heart Can’t Drink Like You Can” campaign is concentrating on reducing people’s drinking rather than getting them to give up entirely even for a limited period of time. I would encourage people to try giving up for a little while; we are coming up to November, which is traditionally a month of abstinence for Catholics.

But there might be other motivations for this advice. When you give up drinking, you miss drinking: and when you go back to drinking, you miss giving up. I realise this is not the statement of an intelligent person, or even of a fully functioning adult, but it is about as honest an assessment as I can make of what little I’ve learned in the past four months.

To recap: I gave up drinking for four weeks in May. I gave up writing about it after a month, obviously, but didn’t drink again until a couple of weeks later. I don’t know why I started consuming alcohol again, to be honest. I had no craving or any real desire for it. I think maybe I felt a little isolated from drinking friends, family and colleagues – ie, almost everybody I know. But, what the hell, I had been living with that and it wasn’t an insuperable problem or even that unpleasant.

I blame Edward St Aubyn, sexy writer and professional dissolute, now reformed, and a person I’ve never met. Hell, I’ve only read one or two of his books. But Edward had this to say in an interview he gave to the New Yorker: “Self-destruction is obviously a defeat, but terrorised abstinence is also a defeat.”

Edward spent at least one of his family fortunes and his youth addicted to heroin. But I identified, which was a stupid thing to do. After all, terrorised abstinence from tobacco had served me well, and the terror does wear off after a while. I also knew from my time spent breaking the smoking habit that the real enemy is complacency. The first challenging days are the easy part: it’s the “I’m sure I’m fine now” syndrome that’s going to make you lose focus and crash.

The slogan of the new campaign is “Say ‘When’ Sooner”. Only irresponsible people would deny that this is a good idea. For the rest of us the thrill of alcohol is surely gone, and our drinking is simply routine. Routines are kind of hard to focus on, so this campaign could be helpful to your average drinker.

However, while it is genuinely informative, some of the IHF hints for reducing your alcohol consumption are more plausible than others. For example, on page nine of the campaign brochure, in a list headed “Tips For Drinking Less”, hint 10 reads: “Switching to smaller glasses will mean you’ll consume closer to the standard drink size and you will still look generous to your guests.” You see that, right there, is what gets non-drinkers – not to mention health authorities – a bad name.

On the other hand, and in the same brochure, there is scarifying stuff on weight gain and alcohol. Before we turn to page 11, please bear in mind that a standard drink is not the old unit of alcohol. The standard drink is defined as containing 10g of alcohol. Here we are on page 11: “For women, 11 standard drinks a week is 1,100 calories a week and this can translate to [sic] gaining a stone in a year.” And, by the way, the recommended maximum per week for women has come down to 11 standard drinks a week, from 14 old units. The recommended maximum per week for men has come down to 17, from 21 of the old units.When the heck did this happen? In 2012, according to the IHF when we rang and asked them. The Department of Health did it.

And so we see the normal drinker appears in the sights of the health authorities more and more often these days. By normal drinker, of course, we mean normal Irish drinker, denoting a level of consumption that in other parts of the world would have you banged up as a dipsomaniac but here just requires that someone else drive you home.

Perhaps the problem about continuing to live without alcohol was that I just wasn’t terrorised enough; my relationship with alcohol wasn’t that fraught. I was able to relax and enjoy drinking again: although you don’t enjoy drinking half as much as you thought you would when you’d stopped. And the hangovers – I’ve had only one – have a horrible freshness about them.

So let’s see how the Irish Heart Foundation does with trying to get us to say “When” sooner. You would have thought that there was no more news to give us about alcohol, but the campaign contains information that will be new to most of us. And it is right to bring it to us, because our relationship with alcohol is something that should be continually discussed, just as long as we keep drinking.