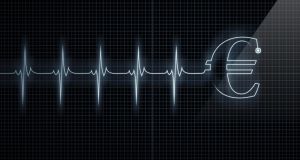 The new research highlights that in Ireland, heart failure remains “the Cinderella of cardiovascular diseases”, receiving proportionally less consideration than the management of acute coronary syndromes and arrhythmia. 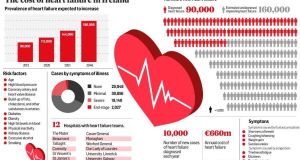 The cost of heart failure to Irish society is €660 million a year, according to a report launched today. The incidence of the chronic condition is expected to rise substantially over the next 30 years, but public awareness in Ireland is strikingly low, according to The Cost of Heart Failure research.

The Cost of Heart Failure research – carried out by National University of Galway (NUIG) during 2012 in conjunction with the Heartbeat Trust, the Irish Heart Foundation and Novartis – is the first study of its kind. “Never before has the national cost of heart failure in primary or community care been assessed,” says Prof Kenneth McDonald, consultant cardiologist and clinical lead for the heart failure clinical care programme.

“This important piece of research shows the extent of the burden of heart failure throughout primary and secondary healthcare settings in Ireland.”

In Ireland, it is estimated that heart failure affects about 90,000 people, with as many as 160,000 having significant impairment of heart function without any symptoms, but at high risk of future development of this condition. There are 10,000 new cases diagnosed every year.

Heart failure is a debilitating, life-threatening condition in which the heart does not pump blood around the body as well as it should. This can cause a person to feel tired or fatigued and also means that they cannot eliminate waste products properly, leading to a build-up of fluid in the lungs and other parts of the body.

Though heart failure can develop at any age, it becomes more common with increasing age. One in five people over the age of 40 will develop the disease in their lifetime. Despite advances in treatment, the outlook for patients remains grim and survival rates are poor. In the first year of diagnosis, 30-40 per cent of patients will die from the condition and 50 per cent will die within five years.

However, McDonald points out that with access to timely diagnosis, appropriate medical management and follow-up services, the mortality rate can be reduced significantly in the first year after diagnosis.

“The National Heart Failure Clinical Programme has done a significant amount of important work for patients living with heart failure, but there remains a lot more to be done,” he says.

“Focusing on heart-failure prevention, the Heartbeat Trust has developed an effective screening and early intervention strategy to prevent heart failure and allied cardiovascular presentations in a cost-effective manner. Notwithstanding these successes, much more is required to manage this societal challenge.”

Some 80 per cent of heart-failure patients suffer from physical symptoms such as severe breathlessness and fatigue. Patients are less able to work, or to participate in social activities and are also likely to suffer from depression and social isolation. Worryingly, only 7 per cent of people can identify the common signs of heart failure, with people often mistaking them for the signs of ageing.

The prevalence and cost of the condition is set to rise due to Ireland’s ageing population and increases in diabetes and coronary artery disease (CAD). Risk factors include age, high blood pressure, CAD, diabetes, obesity, physical inactivity, excessive alcohol intake and smoking. Cinderella The new research highlights that in Ireland, heart failure remains “the Cinderella of cardiovascular diseases”, receiving proportionally less consideration than the management of acute coronary syndromes and arrhythmia.

The report also shows profound regional disparities in patient services and outcomes with evidence of a “postcode lottery” in both existing secondary care resources and in follow-up services available to heart-failure patients.

“Most people end up getting diagnosed when they are sick enough to end up in hospital, but we need to focus more on providing GPs with greater access to diagnostics and professional opinion so that diagnoses can be made earlier.

“When patients return home after diagnosis, it’s important that they are closely monitored by multidisciplinary teams, as about one-third of people end up back in hospital within three months,” McDonald says.

He believes the pioneering screening programme being run by St Vincent’s hospital, in Dublin, in conjunction with the Heartbeat Trust should be rolled out nationally. “Thousands of people with heart- failure impairment are walking around totally unaware of the fact that they are at risk of developing heart failure. By pinpointing those at risk through a simple, cheap blood test, the St Vincent’s programme is preventing people from developing heart failure.”

McDonald says that due to the regional disparity in services, this important blood test is not available in all areas, in particular Cork, Kerry and the southern region.

The vital echocardiograph (ECG) ultrasound scan of the heart is also not available everywhere in the country, while in some regions there is a wait of up to 18 months.

“We don’t have evidence in relation to a disparity of outcomes, but we do know that outcomes are better in the areas around the 12 active units with structured heart-failure teams.

“There are other areas like Sligo and Tullamore making great efforts to come on board. Resources need to be universally available across the country to enable this condition to be diagnosed quickly and for effective treatment to start as soon as possible,” he says.

While heart failure is comparable with chronic lung disease and the worst malignancies in cancer in terms of its negative impact on quality of life, McDonald says that on the positive side, effective treatments including medicines, medical and nursing care can improve symptoms significantly.

One of the recommendations of the report is to ensure patients with potential symptoms of heart failure are diagnosed without delay, no matter where they live in the country. It highlights the need for equitable and rapid access to community and, if appropriate, hospital diagnostic services.

The report also recommends that heart failure be included within the existing chronic disease policies, and that a prevention and early detection strategy be implemented.

Four months ago, Arthur Austen (83) woke one morning to find he was having difficulty catching his breath. His GP sent him to the Blackrock Clinic, in Dublin, for investigation, and he was very quickly diagnosed with heart failure and started on treatment. “I got a bit of a shock at first, but these things happen as you get older. I have suffered high blood pressure since my 30s which is a risk factor. I am on medication now and it seems to be working very well. “I can’t walk as far along the pier in Dún Laoghaire as I used to, but I am hoping to get there again. I have no difficulty hopping around the supermarket, though, and up the stairs.”

Austen has experienced no negative side effects to his medication and will be starting cardiac rehab in the new year.