Health Hints for the Home: ‘If you suspect that your child has mumps, isolate him’

The second of our series looking at the eight ‘Health Hints for the Home’ guidelines sent to Irish households in 1953. This week: mumps 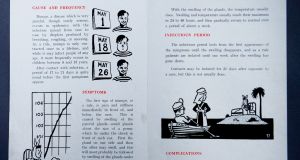 The Department of Health’s advice on treating mumps, part of the ‘Health Hints For The Home’ package of eight leaflets distributed to Irish households in 1953.

The second of these leaflets focused on mumps. We now know that children under 16 years of age should not be given aspirin, and that teenagers, as well as adults, have a higher risk of developing complications including encephalitis, viral meningitis and deafness – in addition to painful swelling of the testicles and infertility in boys and men.

Current treatment advice includes to drink plenty of fluids, but to avoid drinks known to stimulate saliva production, such as fruit juice, as excess saliva can cause pain. Cold compresses are suggested for swollen glands, and a diet of foods that do not require much chewing, such as soup, mashed potatoes and scrambled eggs.

Here is what was included in the second pamphlet.

Mumps, a disease which is very painful, though rarely serious, occurs in epidemics, with the infection spread from case to case by droplets produced by breathing, coughing or sneezing. As a rule, mumps is only contracted once in a lifetime, and while it may infect people of any age, it most frequently occurs in children between five and 15 years.

After contact with infection, a period of 17 to 21 days is quite usual before the first symptoms appear.

The first sign of mumps, as a rule, is pain and stiffness immediately in front of, and below the ears. This is caused by swelling of the parotid glands – small glands about the size of a penny which lie under the cheek in front of each ear. First, the gland on one side, and then the other, may swell, and this will most probably be followed by swelling of the glands under the angles of the jaw. Since these are the glands which produce salivation or “mouth watering”, they are often more painful before and during meals.

The infectious period lasts from the first appearance of the symptoms until the swelling disappears, and as a rule patients are isolated until one week after the swelling has gone down. Contacts may be isolated for 21 days after exposure to a case, but this is not usually done.

There are rarely complications with children. Complications such as inflammation of the sex glands may occur, occasionally, in adults.

Treatment consists in isolating the patient in bed while temperature and swelling persist. Antiseptic mouth-washes and careful attention to tongue and teeth prevent the inflamed glands becoming septic.

Plenty of fluids and a soft diet (milk puddings, soups etc) should be given while there is fever. The doctor may prescribe mild sedatives, and may recommend 10 grains of aspirin about 20 minutes before food, to ease the pain which eating may bring on.

If you suspect that your child has mumps, isolate him; keep him warm in bed; give him plenty of fluids, a soft diet, and send for the doctor.

‘Simon Coveney asked me for a spin’: Readers on their crazy coronavirus dreams
6

‘My life has been destroyed by many catastrophes, most of which never happened’
8

'I contracted the virus, and then I lost my mum'
10