‘Within 48 hours I ate a sausage roll, carrot cake and a chicken burrito bowl’ 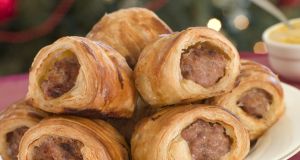 From what I have gathered we all eat far too much meat and dairy, and our excesses are harming both our health and our planet.

I finished my vegan month two days ago and within 48 hours I ate a sausage roll, carrot cake and a chicken burrito bowl. It is pretty clear that I am not entirely converted. I missed meat. That is fact. However, I did not miss meat as much as I thought I would, and while I thought this week would be spent munching burgers, something strange has happened.

Now don’t get me wrong, I am never going to go full vegan, but last night I found myself picking the chicken out of my burrito bowl. Initially I wasn’t enjoying the taste, but then I found myself feeling guilty imagining their little chicken faces.

Then the sausage roll that I ate yesterday left me full of regret, and with a very unhappy tummy. It tasted too rich, too salty and, well, too sausagey. I will not be eating one again anytime soon.

Milk is another thing I won’t be returning to, as one vegan friend commented: “Why would you drink something designed to turn a 100lb calf into a 1 tonne cow?” This morning I had milk with my porridge and it resembled oats soaked in clotted cream.

Delicious at first, but half a bowl in and I needed water. Almond milk will do me just fine.

Taste aside, it will be hard not to be more discerning when it comes to the meat I choose to eat. The documentaries that I have watched, the people who I have spoken to and the articles that I have read have resulted in a new understanding of the meat and dairy industry, and the issues surrounding it. The things I now know cannot be unknown.

From what I have gathered we all eat far too much meat and dairy, and our excesses are harming both our health and our planet. There will no more loading up on the three for two chicken breasts and red meat will be reserved only for special occasions.

People keep asking me if I feel any different after the four weeks. I won’t include the first week when I replaced meat and dairy products with bread and potatoes. Or the French holiday when I ate cream and beef for four days, which resulted in a complete facial break out. But when I have been 100 per cent vegan, yes I have felt pretty amazing. The most noticeable difference is in my skin, which hasn’t had a single spot. I feel leaner and have more energy, and am no longer ravenous before each meal.

I have also discovered all sorts of new recipes and ingredients. Cooking has always been something I have loved to do, but each meal would revolve around meat or fish. Now I have a comfortable vegan repertoire that I will be returning to.

There are a few cookbooks that have helped me along the way: The Happy Pear Cookbook by The Happy Pear (try the veg chilli), Keep It Vegan by Aine Carlin (try the fudgy brownies), Natural Born Feeder by Roz Purcell (try the pancakes). If you are looking for a nice place for dinner Cornucopia on Wicklow Street, Dublin, has great vegan options.

All in all, I would recommend anyone to give it a go. It’s harder and easier than you might think to be green.

For more info on vegan food and to order your free Vegan Starter Kit, visit peta.org.uk