What gives you the strength of a lumberjack and the suppleness of a child?

Beat Winter series: There many health benefits of the ancient Chinese art of tai chi 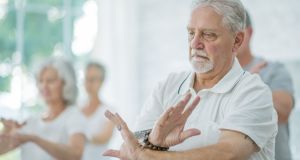 When we are young, falling over is something we do a lot – it might result in a grazed knee and a few crocodile tears but can soon be mended by a plaster and a chocolate biscuit. However, as we age, falling over can be nasty and often with serious consequences. Because we have further to fall and are heavier, the impact is greater and for the elderly, and our bones may have become brittle, so breaking something becomes a very real threat.

But aside from living our lives with great caution, help may be at hand in the form of the ancient Chinese art of tai chi.

Spanish researchers have discovered that older people who take up the activity are 43 per cent less likely to suffer from balance issues and falls than those who don’t. The study, which was carried out at the University of Jaén in Spain, discovered that falls are the “primary cause of traumatic death in older adults” and the deep breathing and slow movements associated with tai chi can help prevent falling accidents.

Prof Rafael Lomas-Vega, author of the study, explains that it is “well-established that exercise and multi-factorial intervention programmes reduce falls in community-dwelling older adults”. The study of 3,000 participants, published in the Journal of the American Geriatrics Society, found that home-based exercise programmes have been reported to reduce the rate and risk of falls.

“Tai chi practice may be recommended to prevent falls in at-risk adults and older adults, especially over the short term,” Prof Lomas-Vega said.

Declan Rothwell of Suaimhneas School of T’ai Chi Chüan (SSTCC) Dublin – a not-for-profit school and branch of the Tai Chi Foundation, explains the principles behind the practice.

“Tai chi is an ancient Chinese exercise which promotes good health by increasing the energy which circulates through the body,” he says. “It gently strengthens each muscle, joint and organ and the movements, performed in the proper way, teach the principles leading to health and relaxation in the body, balance in the emotions and quietness and clarity in the mind.

“Tai chi is sometimes thought of as a sport, but unlike sport or exercises in which your participation grows less and less as you grow older, Tai chi can be practised and perfected by persons of any age. Most sports concentrate on developing muscular strength, working primarily with weight, force and speed, whereas tai chi concentrates on relaxation and does not focus on muscular force or strength. However, this does not mean weakness. It means dealing with force by yielding.”

Clinton Dickerson, from Newmarket on Fergus in Co Clare, took up tai chi six months ago after an injury forced him to stop practising the martial arts he had been doing all his life.

“I did judo as a child, followed by aikido and then karate almost continually from the age of nine – so for 45 years,” he says. “Two years ago I started to suffer from a very debilitating repetitive strain injury and after trying everything from medication to physiotherapy, someone suggested I tried tai chi – so I decided to give it a go. Initially the moves were a little difficult as they were ‘all body’ and different from karate. But after a couple of weeks, I could see the similarities and began to realise the incredible power and balance in every move – and after three weeks, my injury had disappeared.”

Clinton, who runs his own digital services company, has taken to tai chi with ease and says his balance and posture improved after just a few short weeks.

“Like any sport or art, it is difficult in the start, but becomes easier with repetition,” says the 56 year old. “Formal training is once every week for about two hours, but I have found that practise at home does help and while the moves will take years to master [if ever], it is okay to get it wrong and improve over time. I train in Ennis with Kevin and James, who are both very knowledgeable in the art and have a lot of experience. Their training techniques are excellent and I never feel that I am out of my depth.

“One thing is certain though: I noticed improvement in balance and energy straight away and I also can see that my posture has changed. Also my friend who started at the same time as me noted after two weeks training that he had much better balance.

“The mind and concentration are a big part of tai chi and I find that my ability to focus on what I am doing has improved. I also believe that it helps with confidence and general mental well-being.”

Declan Rothwell of SSTCC says there are so many other physical advantages to the ancient craft.

“Regular practise of tai chi develops the strength in your legs which assists your heart by helping pump the blood back to it,” he says.  “Because it works on your alignment it also helps your internal organs to sit where they need to sit and allows a proper breathing space between them which in turn promotes your health.

“But while it greatly benefits older people, it is suitable for all ages.  We have more ‘natural’ tai chi when we are young and our joints and muscles are more flexible. But as we grow older joints begin to stiffen and muscles tighten so tai chi helps us return towards the flexible.  It is said that with regular practise of tai chi one gains the strength of a lumberjack, the pliability of a child and the wisdom of a sage.”

While the movements in tai chi can be complex, enthusiastic novice Clinton Dickerson agrees and says it is very easy to “enjoy the movements and benefit from the art”.

“I look forward to every training session and learn something new every week,” he says. “I believe it’s ideal for anyone – any age or level of fitness and is not only for the over-50s. It’s unique in that you can start at any age and then continue for as long as you want. You don’t have to master the techniques to enjoy the training, and the medical benefits are very real.

“To be honest, I am surprised that more people don’t do tai chi.”