Basic training hasn’t changed in decades. It’s all a combination of a few moves 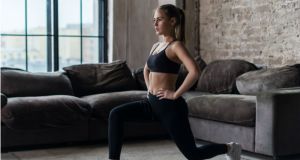 Whatever you do is a combination of squat or lunge; push or pull; bend or twist; gait. Photograph: iStock

When Roger Bannister ran a mile in under four minutes in 1954, it made headlines around the world.  That record has since been broken many times, but what is interesting from the perspective of those of us just trying to get fitter with the little time we have available, is his training routine.

The fitness techniques of our grandparents’ generation is not so wildly different from cutting-edge techniques today.

It’s made a resurgence in popularity due to recent research showing how effective it can be in burning fat and improving a number of health markers, explains Dean Hodgkin, a fitness instructor for more than 30 years and trainer of instructors who in 2012 was given a lifetime achievement award in his industry.

“At the end of the day, the body hasn’t changed for hundreds of years,” he says. “Yoga, which is very popular, has been around for thousands of years. We are constantly reinventing the wheel.”

We also take the time to measure how the wheel performs. “Research comes out with new suggestions,” he says. “If we keep doing the same thing, we get bored and [our physical progress] will plateau. Reinvention is vital for enjoyment.”

Earlier this year, Hodgkin devised a workout routine for Jessica Wright, an actor in The Only Way Is Essex, which is now for sale as “Fi7ness by Jessica Wright”.  That is based on the seven primal moves: squat or lunge; push or pull; bend or twist; gait.

“Whatever you do is a combination of those moves,” he explains.

Hodgkin isn’t advocating that we all simply buy a CD or a download and start bending and twisting at home, however. “I would always advise you invest a little time in research before setting of on the journey to a fitter, healthier you,” he says. “Technology allows you to have exercise delivered to you on your terms, either via downloadable workouts or virtual experiences, joining a class or trainer remotely. Ultimately, though, I advise a mixed approach, as a good trainer in a gym can provide one or two words of encouragement that may help you through a tough workout when at home, you might have quit.”

A trainer can also help to prevent you from injuring yourself and ensure your progress.

“Two primary issues have not changed since I first set out in the industry: doing too much too soon and sticking with the same routine indefinitely,” says the 54-year-old. “Firstly, it’s vital to ease into exercise to avoid injury but also to make it more palatable, it should be enjoyable, something you do for your body not to your body. Secondly, your body quickly adapts to exercise, whatever your previous experience, so it’s vital to keep changing up your sweaty endeavours, challenging your body to keep making progress. If you stick with the same thing, sadly, you’ll suffer a plateau effect and won’t see the aesthetic fruits of your labours.”

Research into exercise has grown hugely in the past 30 years, he adds, which has enabled trainers to deliver safer and more effective workouts.

Hodgkin was in Dublin recently to judge a powerlifting competition, says the  number of "themed workouts and wide range of equipment is a long way from my early days when the choice was limited to not much more than Jane Fonda-style aerobics in the studio, body-building in the gym and running outdoors.”

Despite the wide variety now available, he says the most effective workouts are still those based on the principle of high-intensity interval training as practised by Bannister, he says. It’s worth remembering that Roger Bannister was a medical student in London at the time and he even worked on the day of the race.

“Be warned, however, the idea of these sessions is to push your body and mind to the limit. So it’s not for everyone, but if you like the idea of get in, get it done and get gone, then this is for you.”