From Howth Head to the Phoenix Park, we’ve sampled the city’s most eye-catching routes 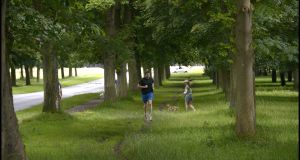 Depending on your fitness levels and time, you could opt to run the entire Phoenix Park perimeter wall of 11km. Photograph: Brenda Fitzsimons/The Irish Times

For those keen to maintain their fitness levels as the autumn settles in, there are few things better than to go out for a run. But if you’re bored with the same routes and streets, here are 10 places within where you should be able to enjoy some personal space and bountiful nature, while abiding by social distancing guidelines.

Pace yourself and take in the views and you’ll feel all the better afterwards.

This offers options for runners and walkers alike. One option is to get the Dart to Howth and start your run right in the heart of the village. A 7km looped route takes you along the promenade, past the east pier and up along the Balscadden Road to reach a cliff trail. On higher ground, there will be views of Balscadden Bay, Ireland’s Eye and Lambay. Continue along a footpath by a stone wall to your left, through a car park to follow the cliff-top trail. At a flat area you can enjoy views of the Baily lighthouse. Just before the summit car park, veer right to follow the green arrows along a broad path along the top of a low-lying ridge to descend through the upper cliff road back down to the village.

If driving, you can start and finish a 7km run from the summit car park on the eastern end of the peninsula. Here, you will enjoy spectacular 360 degree views. Follow red arrows along a coastal path to enjoy a wilder route through trees, bracken, gorse and heather.

If you’re happier running mainly on flat ground, the coastal route from Portmarnock to Malahide is a good option. You can start at the Dart station in Malahide or Portmarnock and choose to do 4km run or follow your tracks back to complete an 8km run. If starting in Portmarnock Dart station, make your way to the Golf Links Road to reach a public car park. Just before the car park, take a left along a grassy path across Velvet Strand, veering north along the beach for about 2km. From there, follow a coastal path, keeping the sea on your right before reaching the village itself.

The hammerhead-shaped peninsula of Donabate lies between the Rogerstown Estuary to the north and Malahide Estuary to the south. The Donabate to Portrane coastal route is popular among walkers so if you want to run the 6.5km loop, it preferably to do so on off-peak times. Starting from the Martello Tower closer to Donabate, the route follows a well defined sandy footpath along the coast to the Martello Tower at Portrane. Consider a quick dip in the sea if it’s a sunny day and take in views of Lambay before retracing your steps on your route back to complete the 6.5km loop.

Accessible by Dublin Bus number 130 or by car (limited car parking space on the island itself), bicycle or on foot, this urban nature reserve was formed over time following the construction of the South Wall and the North Bull Wall to deepen Dublin Port.  It’s a very popular spot so if you run the 6.75km looped route, be respectful of walkers of all ages and abilities.

You can choose your own starting point at either the Causeway Road or the North Bull Wall. The loop incorporates Dollymount Beach (the hard sand at low tide is preferably for running on) and a grassy path that runs parallel to the mainland on your return.

The best starting point for this short 2.5km run is the Killiney Hill car park. From there, take the tarmac footpath north towards Dalkey Hill and its quarry – a popular training ground for rock climbers.  Be respectful of walkers along the route – especially on steps along different sections of the route. The longest stretch of the route along the clifftops runs parallel to the coastline with Killiney Bay directly underneath. The route skirts around the Mapas obelisk. Return to the car park via an undulating footpath.

The Dublin Mountains offer numerous possibilities for those fit enough to enjoy uphill running, so this 4km run starting in Ticknock Forest should be no bother for these hardy types. There are numerous trails – including orienteering and mountain bike trails as well as walking routes – in this popular spot so following the mountain access route trail can be a quieter alternative. Once you arrive at the boulders, cross the road, follow the green trail signposts and then follow the main walkers’ path back through Three Rock Wood to the mountain access route to retrace your steps back to the car-parking area.

Another popular wood in the Dublin Mountains, Cruagh Mountain is one of three summits in the area – the others are Killakee and Glendoo. The 5km looped walk/run starts just above the car park. You can follow the footprint symbols up the broad track and then along a boardwalk on a mountain access trail on to the open hillside to the summit. Descend westwards to reach a broad track back down.

The mature woodlands of Massy’s Estate offer delightful short looped walks and runs in these autumn months. The nearby Hell Fire Club also has short looped walks. Both woodlands are managed by Coillte and detailed maps are available on dublinmountains.ie.

This off-the-beaten-track 9km looped walk/run takes in the lovely Glenasmole valley which has a good variety of birch, hazel, larch, fir and Scots pine trees. It also houses the two Bohernabreena reservoirs which were built in the Dodder river between 1883-1887. The route follows the Dodder right up along the lower reservoir before looping around the upper reservoir and returning on your tracks to the start. The Glenasmole car park is on the left just after the R114 takes a sharp bend to cross the Dodder River at a narrow bridge.

While a managed landscape, Dublin’s largest city park does nonetheless offer plenty of opportunities for running with a mixture of fields and tree-lined paths. It is also very accessible on foot, by bus or by Luas (getting off at Heuston station). Depending on your fitness levels and time, you could opt to run the entire perimeter wall of 11km. You can also choose to follow a 7km inner loop, starting and ending at the visitor centre at Ashtown Castle and passing Áras an Uachtaráin, the Zoo and then back via the Magazine Fort and the Papal Cross.

All directions given are only guidelines to whet your appetite for routes. We strongly advise all runners/walkers to bring maps, guidebooks and/or follow signage at the specific location. Check the weather before going out and wear appropriate clothing and footwear. Always tell someone when and where you are going and inform them of your safe return. Follow leave no trace principles and bring all your rubbish home.