‘Exercise will refresh you so that when you come back to study, you’ll have more energy, you’ll be in a better mood and you’ll sleep better’ 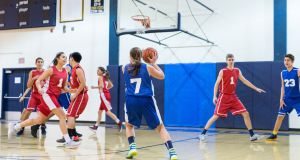 With the State exams on the horizon, taking time out to exercise every day may be seen as a waste of good study time, but flexing those muscles or just limbering up is beneficial for students on a number of levels.

“There is a lot of pressure on teenagers to do well in their exams but if they just stay sitting and spend all their time revising, they are not going to sleep well and their levels of stress are higher than if they take a break from studying,” says psychologist Nicole Paulie, from Ballsbridge Counselling in Dublin. “Exercise will refresh you so that when you come back to study, you’ll have more energy, you’ll be in a better mood and you’ll sleep better. An hour of general exercise every day is a good idea, whether it’s walking or cycling. It doesn’t have to be hardcore physical exercise.”

Paulie cites a 2017 study from Johns Hopkins University that says activity levels at the end of adolescence are alarmingly low. By the age of 19, the levels are comparable to 60-year olds. The World Health Organisation recommends at least 60 minutes of moderate-to-vigorous physical activity a day for children and adolescents.

Drogheda-based GP and author, Dr Harry Barry, stresses the importance of exercise, particularly for students preparing for exams who may be experiencing anxiety, with some suffering from depression. (It’s estimated that 20 per cent of adolescents experience a mental health problem in any given year.)

“Exercise is a wonderful thing for the developing brain,” says Dr Barry. “The hippocampus, which is the key part of the brain for concentration and focus, forms new nerve cells when someone is exercising. One of the key things that happens in depression is that the hippocampus gets bombarded with high cortisone levels. That’s one of the reasons why short-term memory goes down. Exercise ups all the activities of the varying neurocircuitry systems in the brain such as the serotonin system. It drops the cortisone levels and increases endorphins in the brain which make you feel good.”

Dr Barry says that if a student is stressed or anxious, a good brisk walk will make them feel “brighter and more alive. It literally livens up your brain. It’s almost like a positive jolt to the brain.”

One of his “golden rules” is to try and get everyone who’s depressed to exercise for 30 minutes a day. “If it’s a real struggle, then I’d encourage a patient to start with 10 minutes of exercise and then gradually work up. But it has to be part of an overall package. I worry that there’s a little bit of a myth out there that if you just exercise, it will get rid of your depression. It’s not as simple as that. For the vast majority of people with depression, exercise is more an adjunct treatment.”

Dr Barry is not a big fan of medication for depression, “particularly for under-16-year-olds because the brain is only slowly developing. But there will be a certain small percentage of teenagers that might need medication and they have to get that through a specialist. The rest should get talk therapy to try and work out what is going on in their life.”

Anxiety and how to cope with it needs to be addressed, says Dr Barry. “Nobody is talking about it and that’s why we have almost an epidemic of panic attacks. Some young people present with acute anxiety and are almost ashamed of having it. They’re terrified of having anxiety attacks in front of their mates. The more afraid they are of having attacks, the more attacks they get and some of these kids self-harm.”

Panic attacks are caused “by an ancient organ in the brain called the amygdala (the integrative centre for emotions, behaviour and motivation). I call it the gunslinger. The amygdala’s job is to look for danger. It’s really the boss of your stress system. When it fires, it sends information down into your adrenal gland, pouring adrenaline into your blood system. Adrenaline gives you all the physical symptoms of acute anxiety such as the heart pumping fast, your stomach in knots, sweating and shaking. It’s like your body is firing as if there’s a leopard in front of you. When these symptoms occur, people think they’re going to have a heart attack or die. They’re afraid they’re going to lose control and do something mad that people will see. But I teach young people that none of these things are going to happen. I explain that a panic attack is essentially an adrenaline rush. I teach them a technique called ‘flooding’. That’s about going with the physical symptoms which in turn change the amygdala’s memory.”

Dr Barry adds that it’s also important to get to the root of anxiety. And he says it should be noted that a certain level of anxiety is part of the human condition.

Failing is also part of the human condition. “I don’t think young people know how to fail. One of the fastest ways a young person can learn how to fail is to get involved in sports. Sports is about failing a lot of the time. It’s like a microcosm of life.” Not that failing is an option for students preparing for exams. Just don’t dismiss exercising. It helps brainpower and sanity levels.