Robyn Crowley signed up to 12-week training plan, but only started at week eight ... 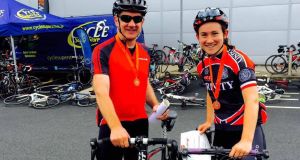 Robyn Crowley, with dad John. Her love of cycling means she started marathon training with a “decent” level of fitness. 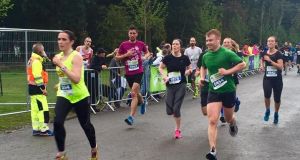 Robyn Crowley (back right) in action at the Dublin Half Marathon. 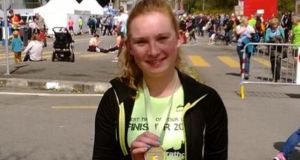 Sisters Heather and Robyn Crowley are running the Dublin marathon this weekend. It’s Robyn’s first trip around the Dublin route. She tells us about her prep (which included long Phoenix Park runs with her sister, followed by all-important brunch) and we’ll check in with Heather after the big day...

I have been interested in running since I was in national school, competing in local cross-country and track events, but the 2016 Dublin Marathon will be my first. More recently my sister has ran two marathons which got me interested in doing one myself.

In November 2015 the two of us ran the Clontarf Half Marathon, a great race for newcomers. I signed up just over a week before the race, with a decent level of fitness. I was surprised how much I enjoyed it.

These events are great fun. I would seriously recommend Clontarf if you are new to long distances. It was well organised and the course is completely flat and includes a short stretch along the beach which was nice on the legs. After that I decided I would definitely be interested in doing more.

When summer came around and my sister mentioned the 2016 Dublin Marathon I thought, “why not”? We did not anticipate that it would book up so fast and missed the online entry. Luckily we got two places in the lottery, after signing up for the Dublin Half Marathon as well.

In terms of training I do a lot of cycling, so I have a decent base level of fitness. I got my hands on a 12-week training plan, but only started at week eight. The plan was to run six days a week, including one interval session and one long run. I found this hard to stick to. In the end I did three 8-10km runs during the week and one long run.

My sister and I did the long run together each weekend in the Phoenix Park. There is nowhere else in Dublin – that I know of – where you can run for two hours and more without stopping or doubling back on yourself multiple times. The number of runners training there also is encouraging. There’s nothing like the nod from fellow runners when you are out training! Having a training partner also makes it more enjoyable too.

The weekly long run (which was usually followed by brunch in Sister Sadie on South Circular Road) became our time to catch up on news from the last week. We started out with a 16km run the first week, followed by a 21km, 25km, 21km (Dublin Half Marathon), 30km, 26km, 18km and 12km last weekend. The Dublin half was a great practice for the big day. I think it is a good idea to try out your pre-race routine, including breakfast (banana on toast for me, my sister has porridge), warm up and multiple trips to the portaloo. A great tip we learned from the half marathon was to bring a bin bag or poncho to keep warm while waiting at the start line.

You can throw it away easily when the race starts. The half marathon reassured me of the training I had done so far and gave me a taste of the adrenalin experienced on race day.

Now a day before the marathon I am starting to get pretty nervous. I am repeatedly checking the weather and googling “how to carb load”. Our goal time is 3h 45mins. We will be careful to pace ourselves for the first half of the race . It’s easy to get over excited and go off too hard for the first 10km – I learned this the hard way in the half marathon! It will also be important to stay fuelled and hydrated – that shouldn’t be a problem with drink stations every three miles of the course.

The best advice I’ve been given as a first timer is to try not to think too much about your goal time and focus on enjoying the experience, from the marathon expo to the cheering supporters on the day.

The training is done now, so all that’s left to do is rest up and look forward to the big day.

Find out how Conor gets on at irishtimes.com/health on Monday.