Can cannabis cure cancer? The proof isn’t out there

Opinion: Beliefs about the miraculous medicinal benefits of marijuana are misguided 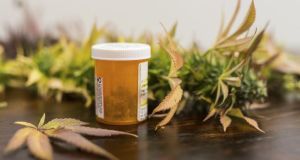 Cannabis has been used for both recreational and medicinal reasons for millenniums, and in February the Dáil voted to legalise it for specific medical conditions. This has been contested by People Before Profit, which claims cannabis is hugely beneficial for a much wider array of illnesses, and accordingly demands wider access. This position is buttressed by gushing testimony of the nigh-on-miraculous powers of cannabis. Yet stripped of emotive rhetoric, such claims are incredibly suspect – and inadvertently dangerous.

Contrary to the perception that it has been neglected by the medical profession, in reality cannabinoids have been studied for decades. Far from being understudied, there have been more than 10,000 peer-reviewed investigations into potential medicinal applications of cannabis, and it is already in clinical practice. Its antiemetic properties have been exploited since the 1980s in a number of common medicines, including dronabinol and nabilone, to treat nausea induced by chemotherapy.

In stark contrast to the claims of medicinal cancer advocates, research suggests the potential benefits are relatively modest. A comprehensive review published this year by the National Academies of Sciences, Engineering and Medicine examined all evidence to date. Conclusion: despite the abundance of investigations into medical use of cannabis, there was evidence to support only three therapeutic uses – treating nausea, chronic pain and reducing spasms in multiple sclerosis.

These aren’t negligible, but this modest contribution must be seen in context. Crucially, the scientific literature simply doesn’t support its use for the many conditions it is alleged to improve, and clinical investigations have shown no demonstrable efficacy for treating ADHD, weight loss in Aids patients, or for epilepsy or autism.

Even for conditions where cannabinoids have application, side effects can be severe and often render it of limited use. THC is not uniformly well-tolerated, and can paradoxically make vomiting worse in many patients. As safer and more effective alternatives exist, THC-based medications are generally only employed when other approaches fail.

Nothing more starkly illustrates the disconnect between the hyperbolic promises and underwhelming evidence than claims made regarding cannabis and cancer. The alliterative mantra “cannabis cures cancer” is ubiquitous among proponents of medicinal marijuana. Such claims are illustrated by miraculous testimonials, from stories of tumours disappearing with cannabis oil to parents “curing” their child’s paediatric cancer with cannabis. These anecdotes are shared relentlessly online, proffered with zero scepticism.

The Irish campaign has been no exception, with such accounts shared widely. Proponents of the Bill, such as People Before Profit TD Gino Kenny, have endorsed pages of such testimony on social media, and speakers at public gatherings (such as the recent Right to Water rally) have taken a similar proposition.

These claims are, to be blunt, absolutely wrong-headed and completely irresponsible. There is zero evidence that cannabis alleviates cancer of any type, and in human trials cannabis has shown no anti-cancer properties.

Vocal proponents vapidly clutch at studies that suggest high doses of cannabis-derived products can kill cancer cells in petri dishes. This is true, but their miracle-cure inference betrays a deep misunderstanding. THC can kill cancer cells in a dish, but so can acid, bleach and heat. Killing cells is trivial – effective anti-cancer agents must differentially destroy cancer cells over healthy cells. For cannabis, there is no evidence to suggest this is the case – and no amount of special pleading circumvents this reality.

Still, advocates appear uninterested in scientific evidence, persisting with unsupported claims. These myths are dogma, not reality. When challenged, proponents resort to conspiratorial mumblings to explain away the lack of evidence for their assertions.

Typically this manifests in the accusation that Big Pharma is suppressing awareness of the curative powers of cannabis. Under this narrative healthcare professionals and scientists are rendered as de-facto villains, nefarious agents of disinformation whose pleas for evidence-based policy can be dismissed with prejudice and without consideration.

This is cynically self-insulating, turning those pushing for evidence-based policy into targets of abuse. This can be seen in the vitriol unleashed on Fine Gael TD Kate O’Connell for questioning misleading testimony over medicinal cannabis.

Tellingly, O’Connell’s qualification in pharmacology is taken not as a signifier of expertise but rather as grounds to dismiss her as a “vested interest”. Autism rights campaigner Fiona O’Leary has endured similar abuse for pointing out the lack of evidence for cannabis-based autism “cures”.

As a cancer researcher and science writer, I too have been on the receiving end of such accusations. While it’s always unpleasant to be targeted for abuse or to have one’s motivations questioned, this hostility against evidence has a much more dangerous consequence.

By encouraging a mistrust of the medical profession and pushing unsubstantiated cures, there is a very real danger that patients abandon conventional medicine for the wild promises of the cannabis lobby. Abandoning effective treatments to chase false hope happens with depressing frequency. Those endorsing false claims bear much of the responsibility for these tragic outcomes.

All this aside, the current campaign has a glaring double standard at its core. While the HPRA recommended the prescription of cannabis for certain conditions, this has been rejected by proponents of the Medicinal Cannabis Bill, who want unfettered access. This stance completely undermines the pretence that medicine is the aim – all medications have side effects, and cannabis is no exception. These are typically mild, but also include strong association with some forms of psychosis.

Arguments that cannabis is “natural” and should be exempt from regulation are equally hollow – uranium and arsenic also occur naturally, but we still regulate their possession for good reason. Like any drug, doses must be carefully controlled. If medicinal use is the true aim, then it should be subject to the HPRA regulation.

That proponents reject this is telling of a different motivation. For all the ostensible concern over medical access, this appears to be little more than a Trojan horse to decriminalise cannabis for conventional recreational use. And while there are excellent arguments for legalisation, it is completely unacceptable to make dangerously misleading medical claims to this end.

Whatever the intention, there is no excuse for propagating health fictions. Such falsehoods are damaging to public understanding of science and medicine, and ultimately, put lives at risk.

Dr David Robert Grimes is a physicist and cancer researcher at Oxford University. He was a joint winner of the 2014 John Maddox Prize for Standing up for Science. davidrobertgrimes.com. Twitter @drg1985