Kerry man completes 5,000km run/cycle across US for charity 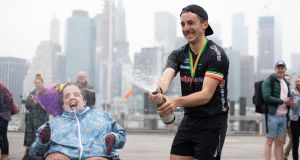 Mary Evans and Shane Finn at the finish-line in New York.

A Kerry man has completed a 5,000km run/cycle across the United States to raise funds for charity.

Shane Finn set off from the Golden Gate Bridge in San Francisco on March, 29th and, 36 days later, finished at the Brooklyn Bridge Park in New York.

In 2010, at just 17 years of age, Finn ran the Dingle marathon to raise money for Spina Bifida Hydrocephalus Ireland (SBHI) in honour of his cousin Mary Evans, who lives with spina bifida and hydrocephalus. “Mary’s daily struggle inspired me to run my first marathon . . . and to conquer every challenge since,” said Finn. In 2014, the Irishman completed 12 marathons in 12 days, raising €36,000 for SBHI. And, in 2017, he finished 24 marathons in 24 days in Ireland, this time raising €142,500. The charity target for Finn’s latest challenge is €250,000.

Evans made the trip to New York and met Finn at the finish-line. “Shane is incredible,” she said. “I am very proud of Shane and all of his achievements. Many people expressed doubt that Shane would achieve this extraordinary feat, but I never doubted him.”

In New York, Finn reflected: “It was by far the toughest challenge I’ve taken on to date, when the tank felt empty, I always found more. I never forgot why I was doing this, and for those who live with the challenges of spina bifida and hydrocephalus every day, this was for them.”

With around 40 babies born with spina bifida each year, Ireland has one of the highest incidence rates in the world. Tom Scott, CEO at SBHI, praised Finn for the fundraising. “To see Shane finish at the iconic Brooklyn Bridge today was a very special moment. Shane has had his sights set on this goal for a long time now, and he has completed something unimaginable to all of us - running and cycling every day to cover the whole of America in just 36 days, it is incredible.”

Finn travels back to Ireland next week, and fundraising will continue with a gala dinner at the Brehon Hotel, Killarney on Friday, June 14th. See americanultra2019.com.

Chocolate mint cookies: A treat to bake with bored children
7

Paul Flynn: how to cook the perfect potato rosti
8

Simple shakshuka: spice up your mealtimes with this Middle Eastern dish
9