Going to Hell & Back with an ambulance crew 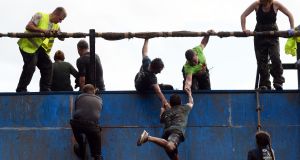 Participants in the Hell & Back event, at Killruddery Estate, Bray, Co Wicklow. Competitors were asked to complete an obstacle course, with ice baths, a swamp, net climb, monkey bars, a crawl through pipes, electric shocks, and walls to be scaled, over a 10k course of rough terrain. Photograph: Eric Luke 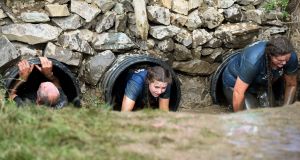 Crawling through pipes at Hell & Back. Photograph: Eric Luke 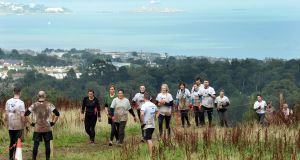 Some 4,000 people took part over the course of the weekend. Photograph: Eric Luke 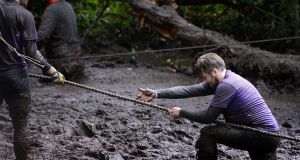 A competitor gets a helping hand as he gets out of the swamp. Photograph: Eric Luke 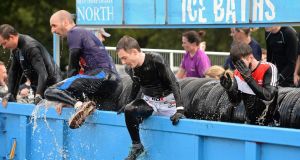 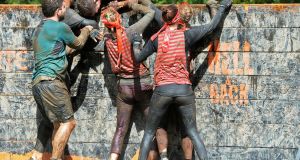 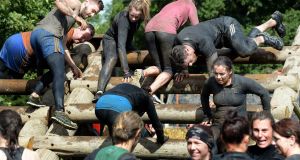 A crowd on the monkey bars. Photograph: Eric Luke

Paul was climbing up a slide when he got a fierce kick right in the face. As we talk, his black eye seems to be swelling in front of me. His friend David has been repeatedly shot in the bum by a cackling man who was all dressed in black.

But they’re laughing about it. The two men are at Killruddery House in Bray, Co Wicklow, and they’re taking part in Hell & Back, a gruelling 7km physical endurance challenge that offers its lucky participants the chance to race up hills, climb monkey bars over a 6ft drop into cold and murky waters, crawl through muddy tunnels, plunge into ice baths, be shot with paintball pellets and get electrocuted by a capricious man.

And yet, somehow Hell & Back has become a hugely popular event, with about 4,000 people taking part over the course of one weekend in early September. Many are raising funds for charity. There’s even a version of the event for children, albeit with the most painful and difficult obstacles removed. Not surprisingly, injuries are commonplace. So who keeps the participants safe?

That’s a job for the Order of Malta. Along with the Irish Red Cross, St John’s Ambulance and the Civil Defence, they support the emergency services at large events and provide back-up in times of national crisis such as during heavy snow and floods. The Order, whose origins date back to 1099, when it helped pilgrims to the Holy Land, has been operating in Ireland since 1938. It is staffed almost entirely by about 3,000 volunteers – even their national director works in an unpaid capacity – and, without them, many concerts, race and major events could not happen.

Many of the older volunteers have been involved as “cadets” when they were between the ages of 10 and 16, and went on to become full members. One member, a man pushing 90, has clocked up more than 70 years of service. Over the course of the weekend, crews treat 79 adults and seven children with problems that include ankle injuries, blisters, back pain, a dislocation, calf pain and shortness of breath. One man is knocked unconscious and has to be brought to hospital.

I’m driving along the course in a 4x4 with assistant regional director Aisling Regan and deputy officer in charge of the Bray unit, Bernard Hayden. The vehicle has three seats and room for a stretcher. We’re heading up the side of the Sugarloaf mountain, with panoramic views taking in Bray Head and Howth. In her day job, Regan works in the health service, while Hayden is in IT. Why do they give up so much of their free time to do this?

“I’ve been involved for about 16 years,” says Regan. “I originally joined because I wanted to be in the ambulance service, but then I became a cadet leader and I’ve stayed involved. I met my husband through the order. I’ve covered all sorts of events including the Croagh Patrick climb, Electric Picnic, concerts at the 3Arena, the Ploughing Championships and horseracing.

“There can be alcohol and substance abuse at the music festivals, although not as much at Electric Picnic as you might expect: it’s quite family friendly and has a bigger age range. I haven’t been able to put my finger on why I do what we do. I just know I love it, although seeing the cadets grow from children into medical professionals is particularly rewarding.”

Hayden also met his partner through the Order of Malta and they’re now expecting their first child. “The slogan is ‘Saving Lives, Touching Lives, Changing Lives’, but we joke that it should also include ‘Creating Lives’,” Hayden laughs. “There’s a great social side to the organisation.”

The laughter is interrupted when a call comes in on the radio. A man has fallen from the monkey bar, landed in waist-high water and fractured his ankle. They head off to help him, but due to the width of the bank, it’s not easy to get him out of the water.

Out on the course, I meet four men from Wexford town who have called their team “Tipsy McStaggers” and are keen for me to take their names. “We’ve gone around twice,” one of them boasts. “Sure 7km is too short. Now, me knees are starting to lock up, but ah, no, I won’t be needing the Order of Malta. Sure, the sauce will help with the knee later,” he winks.

The order don’t always get the respect they deserve. When the crew arrive in an ambulance to help another injured man, his friend keeps yelling: “He needs an ambulance, a real ambulance. That’s just the Order of Malta.”

“I’m a qualified emergency medical technician,” says Regan. “We had a fully trained paramedic at the scene. We are all trained to the same standard as anyone in a pre-hospital emergency care setting, and there are volunteer doctors and advanced paramedics in the organisation. We are volunteers, but we are also professionals.”

They’ve had bad days. When out with HSE paramedics, they’ve seen people die of cardiac arrest. They were there when Dr John Hinds, a well-known travelling medic, died in a motorbike accident in Skerries.

Outgoing national director Aidan O’Brien was on site at the 2012 Swedish House Mafia concert in the Phoenix Park which was the scene of nine stabbings and two drug deaths. “Yes, it can be tough, but we plan for the worst case scenario and, like all emergency responders, we don’t put ourselves in danger.”

A few days after Hell & Back, Caitríona Lucas, a volunteer with the Irish Coast Guard, died when her boat overturned on a rescue mission. Her death is extremely painful for all the voluntary rescue services; Lucas was later remembered at the Emergency Services Parade in Dublin on September 17th.

While the Order of Malta is perhaps best known for its work in emergency medical response, it also houses a HSE-funded command centre at its Clyde Road offices, which serves as HQ for all four emergency response organisations. “We have telecommunications, monitors and screens which allow us to respond to a major incident within an hour. We’ve done this work on St Patrick’s Day,” says O’Brien.

The emergency services couldn’t function without them, but volunteers with the order’s 80 units also work quietly in local communities: transporting the sick, helping the elderly to mass, supporting pilgrims at Lourdes, organising social events in nursing homes and offering various types of community care.

Back at the first aid area, Irish Times photographer Eric Luke and I see a man being stretchered into an ambulance and another hobbling past us. Another woman, looking slightly shell-shocked, has a severe cut on her nose: it almost looks as though a chunk has broken off.

Jamie, a final-year medical student, is triaging all the patients before they are given further treatment.

We talk to Jenny Byrne who has injured her knee after landing in the water. Her team waited for her but she sent them on. Now, she’s waiting for them to finish so she can go to hospital about her knee. Meanwhile, the order are keeping her warm and comfortable. She didn’t get to finish Hell & Back this time, but she’ll try again, she says.

Alice Turley from Ardee in Co Louth is wrapped in foil to keep her warm and thinks she may have broken a bone in her ankle. She’s in surprisingly good spirits. “It was great until this happened. Everyone in the race supported one another and we had strangers helping us up the ropes. The Order of Malta were great, but it’s not my first experience with the emergency crews.

“On Good Friday in 2014, my husband went into cardiac arrest during a half marathon in the Phoenix Park. The St John’s ambulance crews had a defibrillator on site and started the first aid. That’s why he’s here today.”

To volunteer or donate, see OrderofMaltaIreland.org