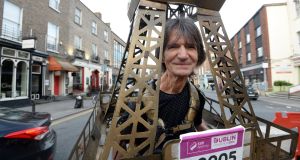 1. It’s the first Dublin marathon on a Sunday, and the biggest field ever, at 19,500. The scheduling helped, but the increase in overseas runners is partly credited to the Irish football fans at Euro 2016. Entries from France tripled this year.

2. One of the French has a 10-foot-tall Eiffel Tower on his head. “Sacre Bleu!” remarks an onlooker. He may hear that a few times today.

3. The race begins outside the Italian Cultural Institute, which last year celebrated Dante’s 750th birthday. He wrote the famous line: “Abandon all hope, ye who enter here.” It’s not one of the better motivational slogans.

4. The man on PA, Liam Moggan, quotes Joe Dolan instead. He advises race participants to give “more and more and more” of themselves in the hours ahead. Dolan was not himself an athlete, but he did send tens of thousands of people home sweating, so he was something of an expert.

5. “You’ve had the courage to start,” adds Moggan. “What you need now is the courage to finish.” With this thought, the enormous field is away, as the first of four “waves” breaks onto Leeson Street.

6. “Beer and cake soon”, promises a placard in the cheering crowd near St Patrick’s Cathedral. It’s a lie. What’s actually coming soon is a hill, the first of the race, at Christchurch.

7. Amongst the noisy encouragement at Stoneybatter, there is also an outbreak of satire. “Worst parade ever”, declares a placard. The holder is a small boy, aged about 10.

8. More satire in the Phoenix Park, where two young girls from Armagh hold a sign comparing the benefits of watching the race via-a-vis participating. It reads: “Me: coffee, cake, toenails. You: pain, suffering, free banana.”

9. The trees are in their autumn beauty. The woodland paths are dry. It’s bright and cool in Phoenix Park. The eight-mile mark is nigh.

10. The Eiffel Tower wobbles through Chapelizod, to yet another outbreak of laughter and applause. The man underneath it is called Michel Bach. He’ll be Michel Bad-Bach tonight.

11. Outside the Patriot Inn in Kilmainham, Belgian Wouter Rys holds a sign saying: “If you hit the wall, run through it.” It’s a well-placed message. Across the road is the old Gaol, which has some of Ireland’s highest, thickest walls, although inmates did indeed get through them on occasion.

12. The “Beer and Cake Soon” sign reappears at Dolphin’s Barn. It’s slightly more believable now, but not by much.

13. On a lamp-post further on, in an example of both bad taste and inspired marketing, a furniture shop advertises: “Bed Sale”.

14. Also at Crumlin, Muireann Walsh holds a placard decorated with pictures of cartoon baby Maggie Simpson and the massage: “Do it for her”. It’s aimed at Muireann’s boyfriend Kevin. “But is there an actual baby at home?” we ask. “God no,” she laughs, “he’d definitely be running then!” They merely like the Simpsons.

15. Among the crowds on Crumlin Road is a sign aimed at “Mammy” and saying: “If you could manage us, you can finish the marathon”. Mammy is Caroline Wall, from Carlow. Daddy doesn’t get a mention, typically, but he’s running too.

16. At Orwell Road, a direction sign saying “Race route” is upside down. This hints an Orwellian nightmare ahead, but most race participants are still in good shape and the crowds continue to be raucously encouraging.

17. Among the field is a large contingent from Dublin Fire Brigade, some of whom face a long day. Late October doesn’t just mean the marathon in Dublin, it also means fires. A number of the runners will be back on duty tonight.

18. The field passes under Milltown Bridge, approaching the critical 20-mile-mark. In some cases, this may be a bridge over troubled runners.

19. The race is still far from over, but cake has made its promised appearance. Jaffa cakes anyway: on one of several plates of sugar-loaded offerings from bystanders at Milltown. Still no sign of beer, though.

20. One of the women with Jaffa cakes is supporting runners from the Irish Stock Exchange. Not stockbrokers, she clarifies: “They’re regulators.” It’s a comfort to know that Ireland’s financial regulators are staying fit. Just so long as the banks don’t start running again.

21. At Ballsbridge, the race end is in sight. Tiring legs need special motivation now. Standing beside a group of gardaí, a man provides it with a sign saying: “Run like you robbed something.”

22. Ignoring this blatant criminal incitement, the uniformed officers recognise colleagues out of uniform in the race-field and shout: “Come on the guards!”

23. The marathon us over, and for 19,500 tired people it’s all about medals, goodie bags and free bananas. But just beyond the finish line at Merrion Square, two Italian literary tourists have a problem. Antonella Salzano and Irene Audrito from Turin were hoping to visit the Oscar Wilde monument in the park opposite. Unfortunately, they’re on the wrong side of the race barriers and a sea of sweating humanity.

24. Somebody advises them to try again tomorrow. But recognising cultural refugees, The Irish Times comes to the rescue, recommending the nearby Sweny’s Chemist instead. It was immortalised by James Joyce in Ulysses and, crucially, it’s on the right side of the course.

25. With the combination of fancy dress, and people walking around like zombies, parts of the finish area resemble a Halloween party. “We’re like the walking dead,” says a woman to her equally stiff friend, as they hobble off.

26. Some can’t even hobble. At the corner of Merrion Square, two male runners lie stretched on their backs, legs propped up against the barriers. From his nearby rock, Oscar Wilde stares down at them with a quizzical expression.

26.2. Those runners may be in the gutter, Wilde seems to be thinking, but at least they’re looking at the stars.