Increase your water, veg and book intake and clear out your wardrobe and inbox 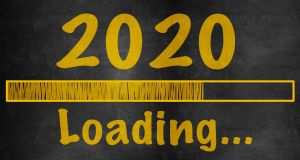 It’s a new dawn, it’s a new day, it’s a new decade. As on the first day of school, we are all determined never to blot our copybooks, vowing to stay on the straight and narrow and to be ever so mindful of our health and wellbeing.

By January 2nd, good intentions have been shelved quietly, alongside the coffee-flavoured Roses, not to be seen again until this time next year.

Instead of huge life overhauls, why not try conquering a few new, and entirely doable, things to try instead?

Be completely honest – when was the last time you aired or cleaned your duvet? Here’s some research that will have you speeding towards the nearest dry cleaners: In 2006, researchers at Worcester University analysed 10 typical duvets and discovered they could contain up to 20,000 live house dust mites, as well as bacteria and fungal spores. Dead skin cells, dust mites, bacteria, fungi, and mould also call your pillow home; according to some researchers, it makes up to a third of the pillow’s weight. Once every six months should keep critters at bay.

2) Do a wardrobe clearout

Gyms, hypnotherapists and nutritionists are often booked solid in January, and joining that particular race can be dispiriting. According to reports, 73 per cent of us who start a fitness regime in January fall off the wagon by March. Instead, tackle a much more manageable and realistic project away from the madding crowd by giving your living space an overhaul. You don’t need to go the full Marie Kondo: just tackle one wardrobe or drawer at a time, and be sure to send what you’ve cleared out to the local charity shop.

You probably got a book from your well-meaning aunt at Christmas: why not actually read it? If time is truly tight, try listening to audiobooks during your commute/the gym/housework.

4) Save money without noticing

5) Have a full health NCT

This is one of those things we put off from time to time because of time constraints (and, if we’re honest, we’re a little nervy about what the results might bring). Face your fears: VHI does full health checks, as do the Beacon and Mater Private in Dublin and the Bon Secours in Cork. The Mater Private’s Healthcheck department, for instance, offers a comprehensive screening programme which incorporates a detailed medical history and lifestyle analysis, as well as a physical examination. Tests conducted include blood profile, kidney function, bone profile, mammogram, ECG, chest X-ray and lipid profile. As a first step, you could consider availing of the various screening facilities that are available in pharmacies all around the State. For example, at McCabes pharmacies, you can get simple tests such as a cholesterol, PSA, or glucose-level check.

Is your daily commute having an adverse effect on your mental health? According to recent reports in The Irish Times, it very well could be. If your job allows it, now might be the time to request a meeting with your boss and float the idea of working from home one or two days a week. Employers who want to retain valued staff are becoming more amenable to the idea of telecommuting or, at the very least, more flexible hours to allow for a better work-life balance.

Ask anyone who has volunteered, and they will report myriad benefits from an increased sense of community and renewed purpose to a “helper’s high”. You don’t need to build a school from scratch to make a difference, either. For the time-pressed, or those who don’t see themselves in traditional volunteering roles, the nature of volunteering has widened to benefit a number of different parties. Micro-volunteering is especially on the rise, and literally requires a commitment of two to five minutes. It can be a really short, one-off piece of work, like counting bee flowers online (with Count Flowers for Bees, which helps to create a flower map of Ireland to help conserve insects). Other sign up to the Be My Eyes app: Professing to “bring sight to blind and low-vision people”, the free app connects visually impaired people with sighted volunteers for visual assistance through a live video call. Another micro-volunteering initiative, Post Pals (postpals.co.uk), aims to lift the spirits of ill children by sending them cards, small gifts, letters and emails; yet another micro-volunteering initiative that has made a big difference.

This one is simple, accessible and free: aim to drink 2 litres of water a day. Once your body gets used to it (after a day or two of feeling your organs are waterlogged, and going to the bathroom every three minutes), you’ll crave the water and it’ll soon feel like second nature. Plus, the benefits for body and mind are plentiful. According to skin experts, there’s not a skin-quenching potion in the world that can beat drinking 2 litres of water a day.

Add flax seeds, linseeds or shelled hemp seeds to foods such as yogurt and cereals, and you instantly top up your good fats and vitamin intake. Aloe vera supplements apparently gently cleanse the colon and keep our digestive system on an even keel. Milk Thistle strengthens the liver against some things thrown at it, while it is claimed cod liver oil boosts brain power, with the added benefit of nourishing skin, hair and nails.

Invoking the L'Oreal ad beauties with a “because I’m worth it” pitch is guaranteed to backfire. Instead, do your preparation and research. Be clear about why you want a raise, whether it’s the market value or the value you add. Identify a specific, realistic figure, and reflect on what else you want (like other benefits or additional responsibility). Think about the wider context – how the company and sector are doing. How are you performing relative to the role and expectations? Is that value known by the various decision makers? Timing your ask is important, ideally in the context of some other good news. Do not accept a “no” based on one meeting. Respectfully ask for a response based on some reflection. And if you’re not successful, stay positive . . . but start developing a career plan.

According to research, the average corporate worker is receiving more than 100 emails a day, and this is growing. If you don’t get in control of this medium you will be constantly swamped and will never be able to manage your time effectively. You need to get to a stage where the inbox is treated like a normal letter box, and is emptied after each visit; the emails are filed, deleted, sent to someone else or pulled into a task to be done later. The inbox cannot become a “to do” list. Take back control, keep your inbox empty, and use your time effectively to achieve your key objectives such as spending time with family and friends, and staying fit and healthy.

Instead of spending energy fretting about the lovely things that a “healthier” lifestyle might not allow, focus instead on getting more of the good stuff in. The language attached to weight loss often centres on loss, discipline and an ascetic way of doing things. Instead, ask yourself whether you have hit your fruit and vegetable target. And instead of aiming for five portions of fruit and vegetables a day, go the whole hog and aim for eight. Start your day with fruit, end your day with fruit and punctuate the day with fruit. Have vegetables at lunch as well as at dinner. Suddenly, your focus has turned from one of hardship to one of plenty.

We have officially fallen for the cult of self-improvement and self-actualisation. It’s great to have goals, but according to author Catherine Gray, focusing on what you already have is a much healthier way of going about things. In her new book The Unepxected Joy Of The Ordinary, Gray encourages us to stop focusing on what’s wrong with our lives, and start “re-enchanting the everyday”. She also busts some myths along the way: big bucks means big happiness; expensive weddings equate future happiness, high intensity exercise is the best sort of exercise. Take a leaf out of Gray’s book and be kinder to yourself by appreciating life just as it is.