Feeling arty in the world of medicine 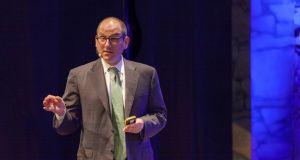 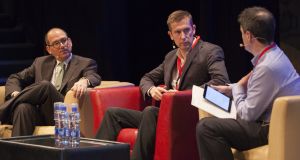 What do a novelist and playwright, a comic artist and writer, a photographer, a medical ethicist and a social media expert have in common? They are all medical doctors and all appeared at the dotMED conference which was held in the Smock Alley Theatre in Dublin last month.

Now in its fourth year, dotMED is not the usual medical conference – it aims to reconnect with the art and humanity of medicine.

The conference was founded by Dr Ronan Kavanagh, consultant rheumatologist who, and our Health+Family’s Dr Muiris Houston. Kavanagh says the event was born out of a sense of boredom and unfulfillment with traditional medical conferences, which are largely science- and data-based.

“We also felt there was a need within ourselves and amongst our colleagues to try and reconnect with everything that is great in medicine. So dotMED is a meeting designed to inspire and re-enthuse doctors about their medical calling. We do that by exploring the spaces within medicine and between medicine and other disciplines,” he says.

In her talk, she drew parallels between the art of medicine and theatre and underlined the importance of patients and doctors making a real connection in consultation.

According to Bowman, just as actors bring some of their own personalities and experiences to the roles they play, so, too, do doctors. One of the most important things a doctor could bring to the consultation was “presence”, she suggested. “I don’t mean physical presence, I mean presence, [being] engaged. ‘I am here and I am here with you now’. It is the simplest thing and the hardest thing, especially when there is a lot going on,” she said.

Bowman described the patient-doctor consultation as a “mysterious, unique and special interaction” that could create hope in situations that appeared hopeless and could offer solace where there had not been any. That, she said, had “unique transformative power”.

“We talk about medicine as a set of skills and, although it is great that we have evidence-based medicine, we have lost some of the sense of just the humanness of it, the simplicity of it.

“Ultimately, a human being sitting with you in a dark moment or listening to you without judgment when you have been frightened is as therapeutic as any amount of prescribing. We don’t talk about it and we don’t value it as much as we could.”

Bowman said she believed the art of medicine was “much more important” than the science.

As well as the art of medicine, other art disciplines were also celebrated at dotMED, which featured a photographic exhibition as well as a live music performance by Irish musician Colm Mac Con Iomaire.

The photographic exhibition Limits shown as part of the conference. In it, Dr Leticia Ruiz Rivera, a palliative care physician from Spain, portrayed the deeply human effects of on-call hours on junior doctors.

Ruiz Rivera photographed junior doctors before and after a long and arduous on-call shift. While the before photographs show smiling young professionals, the effects of fatigue and stress can be clearly seen etched in the same faces in the photographs taken immediately after a shift.

Other artists featured included Ian Williams, a GP and comic artist from the UK, whose critically acclaimed graphic novel The Bad Doctor was published in 2015. He also pens a regular comic strip Sick Notes for the Guardian.

As in previous years, social media played a large part this year. Kavanagh sourced many of the speakers exclusively on Twitter and the hashtag #dotMED16 was trending in Dublin on the day.

Kidney expert Dr Joel Topf (@kidney_ boy on Twitter), from St John Providence Hospital in Detroit, Michigan, spoke about the role of social media in medical education. Mobile devices, he said, would inform future generations of medical textbooks and social media would also have a strong part to play.

However, he added: “The social landscape is just a bunch of junk food and if we want to have medical education there, we need to improve the nutrition of that diet or, in other words, how do we go from Kylie Jenner to Edward Jenner?”

According to Topf, social media can also be used to develop medical education communities across national boundaries and time zones. This, he said, could bring back some of the collegiality of medical school.

Author of The House of God and playwright Dr Stephen Bergman, aka Samuel Shem, was the final speaker.

At a time when doctors and healthcare workers are under increasing pressure and the health service is often the subject of bad news, the focus of dotMED is a reminder of the value of humanity in human medicine and the need to treasure it indefinitely.