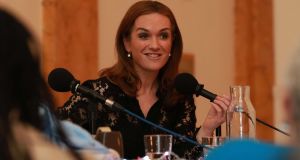 As the shots fired and almost 500 people died, babies continued to be born during the Rebellion of Easter 1916. This generation of babies would see the formation of the Free State and the birth of the Republic of Ireland. The first baby born at the National Maternity Hospital (NMH) in 1916 was the daughter of a lamplighter – a fitting symbol for the change in the current of public opinion following the execution of the rebels, as if someone had flicked a switch.

Forty cases of gunshot injury – men, women and children – were attended to at the NMH and the hospital mortuary filled with dead brought in from the surrounding streets.

The white flag that would stop the carnage was carried by Elizabeth O’Farrell, who would later train as a midwife at the hospital. Like many of her comrades, O’Farrell fought fiercely for a Republic that would be able to claim the allegiance of every Irish woman and guarantee religious and civil liberty with equal rights and opportunity to all its citizens.

As we know, the new State was far from being equal. Countess Markievicz made it to the first declared Dáil of 1919 but it would take six decades before the number of women in the Dáil exceeded 10. Some of the first Bills passed by the Free State limited women’s opportunity in public life including the Civil Service Examinations Bill, The Employment Bill, the Juries Acts and the Marriage Bar. It was as if the State was making a statement of intent.

The Free State was born in poverty. Dublin contained some of the worst slums in Europe, reflected in appalling maternal and infant mortality rates. Conditions in the maternity hospitals were very difficult throughout the turbulent years of war after the Rebellion and into the 1920s.

In an echo of today’s circumstances, the annual NMH Hospital Report 1916-17 reports significant infrastructural difficulties and that “all hope of improving them must be abandoned until the return of more prosperous times”.

The Annual Hospital Reports of the 1920s have striking similarities to my own, chronicling increasing activity and inadequate resources. Unexpected money from the infamous Irish Hospitals’ Sweepstakes allowed for the refurbishment of a number of hospitals during the 1930s, including the NMH, but despite some recent refurbishment, the building is little changed from what it was in the 1930s.

Single mothers were socially reviled and one-third of illegitimate babies died in their first year of life. With little means and no support, some mothers resorted to infanticide in desperation. In the words of Ena P, who killed her baby son because she said she had no means to care for him, “What else could I do?”

Recent reports on the institutionalisation of single mothers in Ireland have horrified us and are at odds with the projected self-image of comely maidens and sturdy children “dancing at the crossroads”.

The first great celebration of the Free State was the Eucharistic Congress, which copper-fastened the close links between Church and State, a relationship that would endure and at times inform State policy. Indeed, the Catholic Church played a pivotal role in education and medicine – a role that long preceded the Free State. Many of the voluntary hospitals that have led the way in Irish medicine were founded by religious orders. The NMH was founded by charitable donation from an increasingly affluent Catholic class in the 1890s.

The relationship between Church and State had a profound influence on female sexuality and reproduction. The Criminal Law Amendment Act (CLA) of 1935 and the debacle of Noel Brown’s proposed Mother and Child Scheme in 1951 are among the best illustrations of this.

Under the CLA, the use of contraception was not just a moral matter but a criminal offence. It would take 36 years before the women of the famous “condom train” of 1971 openly protested against this by bringing contraceptives from Belfast to Dublin. In McGee vs. The Attorney General in 1974, the right to use contraception was granted due to a spouse’s right to marital privacy and not because of risk to maternal health – the premise for the case. The spectacle of Virgin Megastore being prosecuted in 1991 for the sale of condoms shows how far reaching this law was.

During the war years, rationing made life especially difficult but maternal mortality rates fell due to the introduction of blood transfusion and antibiotic therapy. Home birth continued to decline in the 1950s. Caesarean section rates were low, standing at about 5 per cent in the 1960s. From the mid 1960s to 1980, births at the NMH increased sharply, stretching hospital resources. Over the next three decades the advent of neonatal intensive care, obstetric ultrasound and improved obstetric anaesthesia and maternal medicine combined to dramatically reduce maternal and perinatal mortality.

The excessive regulation of our past lies in stark contrast to the lack of regulation in the area of assisted reproduction, which is a global business.

Despite great strides in improving perinatal outcomes, maternity services have lurched from scandal to scandal. There is recognition that maternity units in Ireland are struggling under the weight of excessive activity, with inadequate staffing and infrastructure. In the past we paid lip service to the wonder of birth, but we did not talk enough about the reality and the requirements of birth. We still do not pay sufficient attention to birth.

It is hard not to look back and wonder if this legacy is partly related to women’s diminished roles in our two major institutions – the Church and the State. It is encouraging to see the production of Ireland’s first Maternity Strategy (2016) and the acknowledgement that we need to build and staff new maternity hospitals. Everyone is born and every birth matters.

We have come a long way since 1916. Our Republic has been shaped by war and peace, boom and bust. Women’s roles have grown and developed, encouraging us to dream of opportunity as the women of 1916 did. The next generation is coming close behind. There is much work to be done as we pass them the baton.

Dr Rhona Mahony is Master at the National Maternity Hospital. This is an edited extract from a keynote address at the ‘Institutions and Ireland: Medicine, Health and Welfare’ at Trinity College Dublin last month. The next event in the series takes place in TCD on June 7th. For more: institutionsandireland.wordpress.com

‘People think I’m drunk because of my slurred speech’
9

Love languages: Are you a gift-giver, or do you take out the bins?
10