Being first-time parents and having to deal with the diagnosis was really tough, but Eóghan’s personality helped them through it 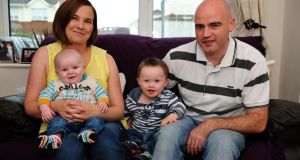 Eoin and Gillian Casey with their sons, Eóghan and Emmet. Photograph: Aidan Crawley

When Eoin and Gillian Casey welcomed their first son, Eóghan, into the world, they were shocked to discover he had Down syndrome.

“We were not aware that Eóghan had Down syndrome until after his birth so it was a huge shock to us when we received the diagnosis. It was a very emotional time for Gillian and me but, with the help of our families and good friends, we were able to get through those tough early days,” says Eoin.

“We also got help from the Coombe hospital and were referred to early intervention services, who gave us great support.

“We now realise how lucky we are that Eóghan is a very healthy little boy. He has no heart condition and his hearing and eyesight are both good. He has had a few coughs and colds over the years, but no more than any other two-year-old boy.

“Obviously with Down syndrome, there are some issues which need to be overcome and it takes him a little longer to reach certain milestones. He isn’t walking independently just yet, but is a determined little man and is working really hard with his physiotherapist, so hopefully it won’t be long until he is up and about.

“Every milestone he meets is extra special for us as he has to put in a lot of hard work to get there.

“He has only a few words at the moment: his favourite is ‘no’, especially when it comes to bedtime. But we have completed a course in sign language, called Lámh, which will help him communicate with us until he is able to speak.

“He really is an amazing little boy – so mischievous, with a real sense of fun and an infectious little laugh, and loves nothing more than horseplay and jumping all over me.

“He also loves playing with his football and cars and is a huge Peppa Pig fan. He has been swimming with Waterbabies since he was five months old and is really confident in the pool, even underwater.

“Eóghan is now a big brother to four-month-old Emmet and, apart from an initial period of jealousy, he loves to shower him with kisses and has recently started to help with his bottlefeeding.

“So for the most part, the past two years have been very happy. Obviously the initial diagnosis was a shock and took time to get used to. We were first-time parents so we had to cope with a newborn in the house as well as dealing with the other issues that came with Eóghan’s diagnosis. But as his personality started to shine through, his having Down syndrome became less of an issue and Eóghan just became Eóghan.We love him to bits and wouldn’t change a thing about him. So, to be honest, we are no different than any other family with two little boys.

“We discovered the Down Syndrome Centre [DSC] in the early days after his birth and, after making contact with them, found them really positive and their seminars really useful.

“Early intervention programmes are vital for children with Down syndrome so that they can reach their full potential but, due to Government cutbacks, many children aren’t getting the therapies they badly need. The DSC provides these but as it receives no Government funding and relies solely on donations from the public, I decided to run the marathon in order to help raise funds.

“I started running 12 months ago with a ‘Couch to 5k’ programme and once I had that completed I realised I had caught the running bug and went on to do a 10k and then a half-marathon.

“Running a full marathon was always something I would have liked to do but not something I actually thought I would ever achieve. But when I saw that the Down Syndrome Centre was one of the main charities for this year’s marathon, I felt if I was ever going to do one, this was the year to do it.

“Training is going well. I am following an 18-week plan which builds you up nice and slowly with the runs getting longer each week until the marathon. I am really enjoying it and am looking forward to the big day.

“Having a child with Down syndrome does take some time to adjust to and the main thing I would tell parents with a new diagnosis is that you may not see it now, but it really will all be okay. I would tell them to try not to worry about the long-term future and just enjoy your child as he or she grows and achieves their milestones. It’s also good to talk to other parents who have kids with Down syndrome because there is a great support network out there for when you’re ready to access it.

“Eóghan can and will achieve anything he wants and we will give him every opportunity to do so. We are very positive about his future and fully intend for him to go to mainstream school and some day live independently.

“We thought our lives had changed forever the day Eóghan was born: and we were right, but little did we know it had changed only for the better.”