Doctor conference with a difference: rappers, undertaker-poets and medical start-ups confer in Dublin 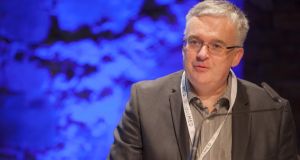 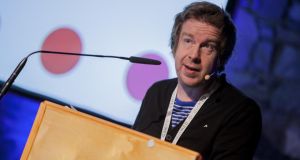 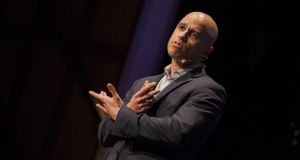 In Dublin’s Smock Alley Theatre, 178 medical professionals are listening to a rapping doctor singing about Ebola to the tune of The Kinks song Lola. The GP beside me is gamely trying to sing along.

The audience has listened attentively to the philosophies of an undertaker- poet, the anxieties of a tech-fearing novelist, the insights of a blog-writing former patient and the futuristic developments of medical-entrepreneurs.

This is Dotmed, the annual “creative medical conference” run by rheumatologist Dr Ronan Kavanagh and Irish Times columnist Dr Muiris Houston. It explores, in the words of Kavanagh, the spaces between medicine and humanities and media and technology.

“We see it as a kind of retreat for healthcare professionals, to soften up our edges,” he says, as attendees drink coffee in Smock Alley’s Banquet Hall. “When you’re working in any profession your focus tends to be very inward looking . . . I think it’s a really important aspect of professional life to look at the world around you and see what you can grab from that world to improve the quality of life for your patient.”

The themes are loose – “It’s built around things Muiris and I find interesting,” says Kavanagh – but many here seem particularly concerned with nurturing the human connection between patient and doctor that can get lost in jargon and bureaucracy.

Marie Ennis O’Connor, a former cancer sufferer, a blogger and healthcare writer, begins the day asking medical professionals to listen to their patients. She talks about her own experiences, discusses research into the doctor/patient relationship and identifies “story” as the “bridge to build empathy and compassion in medicine”.

Dr Louise Aronson from the University of California San Francisco makes this argument from a physician’s perspective. “You’re supposed to put on your white coat, literally and figuratively, and you’re not supposed to be a person anymore,” she says. She says physicians should learn about their patients’ values and who they are as people.

When the discussion is opened to the audience, many agree with the need to humanise the patient-doctor relationship, but say they’re hindered by time constraints.

Arts administrator and former cancer sufferer Katie Verling speaks from a patient’s perspective. She gives them this insight: “When a consultant comes into the room and takes your hand, you’re f***ed.” Everyone laughs.

Verling tells me during the coffee break that she wants to make sure the patient’s perspective is represented. I meet medical students Pishoy Gouda and Colin Murphy. “I told Pishoy he was going to have to rap,” jokes Murphy. “He couldn’t pay attention to the first three talks because he was sweating in anticipation.”

Gouda says that this event is a reminder of what’s important about doctoring. Murphy agrees.

“In med school you’re taught to diagnose but you can lose focus on what’s actually important about the whole experience for the patients.”

Emma Barnard, artist in residence at Whipps Cross University Hospital in London, and her collaborator, Dr Jonathon Tomlinson, discuss her powerfully evocative artworks, based on the experiences of patients she photographed and interviewed.

She talks about how overawed and dehumanised they feel. “They want an opportunity to have a voice,” she says.

Thomas Lynch, a witty Irish-American poet and undertaker – “I’m interested in corpses and couplets” – reads poetry, tells funny funereal stories and talks lyrically about what doctors can learn from death. “Almost everyone I have buried had just been to the doctor,” he says.

He feels many doctors gloss over death. He says that doctors should go to their patients’ funerals; for some, this seems to be taboo.

Lynch’s talk is followed by a film by Kevin Barry and artist Louise Manifold about Cotard’s syndrome, a psychiatric disorder that leads people to believe that they are dead. Then Barry reads an essay about the effect of internet connectivity on his frazzled nervous system.

“This little groove is called Smoke,” he says. “But it’s in no way an endorsement of the tobacco industry.”

Dr Zubin Damania, aka ZDogg MD, is an American physician-rapper-reformer. As Thomas Lynch notes, many here lead “hyphenated existences”. During a coffee break Damania explains how he adopted the ZDogg persona “to entertain and educate but also to give myself a voice about how dysfunctional the system is”.

There are some showstopping moments. There’s the aforementioned Ebola song and an impromptu rap, but the best bit is a YouTube video. In it he explains to young men the importance of checking their testicles for lumps while dressed as Michael Jackson. “I’m checking out my nads in the mirror,” he sings.

As the day ends, artists and medics make their way to restaurants and train stations. Gary Stack, a Killarney-based GP, says Marie Ennis O’Connor gave him the most to think about, although he could really relate to Thomas Lynch. He says that times are hard for GPs but he found the conference “uplifting”.

“That figure of authority who you were bowing towards: the younger ones don’t want that any more. Doctors seem to be very different from how they used to be.” dotmedconference.ie/