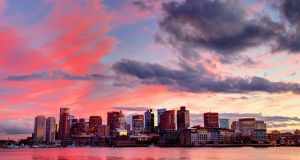 This never used to be a problem. There were always flights between Boston and Ireland. If you booked well in advance, you could even get them cheap.

About five years ago, I stood on my parents’ front porch looking out across Boston Harbour. An enormous grey cloud had been slowly expanding upwards and flattening out, like smoke in an overturned pint glass, for the previous hour. I watched it from a quiet distance, with fascination and unease. The air grew thick and muggy.

The cloud, now ominous and anvil shaped, suddenly erupted in lightning. Seconds later, our windows gently rattled in their frames. At nearly the same second, the grey cloud started moving, sliding rapidly from right to left across the horizon.

I watched, transfixed – too transfixed, as it turned out. With an enormous flash-BOOM, the storm suddenly veered sharply to the left, and in the time it took for me to turn to my mom and say: ‘My goodness, that’s headed right at us,’ the storm slammed into the side of the house.

My mom and I ran into the house, the door slamming wildly as I fought to close it. The wind howled and shrieked down the street, lifting the rubbish bins like shopping bags. The rain was coming through the windows fully sideways, like the house had tipped over on its side, or a group of quietly deranged firemen were using our house as target practice for their water cannons.

And then, just as suddenly as it had started, it was over. The howling wind and the sideways rain vanished, leaving only the sound of dripping books and vases spinning on their edges. The world was still again.

Before the storm, the air was humid and claustrophobic.

After the storm, it was like a bending stick had finally snapped.

The relief was enormous; the air felt fresh and light and giddy. Even the inconveniences that followed – power outages and wringing out bed linens – were imbued with a residual adrenaline and release.

The coronavirus pandemic has felt like waiting for that storm.

The news reports sounding increasing alarm, the first gusts of wind that sent us scrambling indoors, peering out anxiously through the curtains. Waiting for the sky to fill with a storm. Wanting it to come quickly for the relief that’s in it, but in equal measure, dreading its arrival. Starting to think it was a false alarm.

And then the trees began to shake.

But with coronavirus, there won’t be any breaking of the tension afterwards; the storm might not pass for weeks, or months, even years. There will be no collective exhale of relief that it’s over, because once this storm fades – and the worries of a second wave go – another storm, an unprecedented financial storm, will veer sharply to the left and slam into our world.

These are the anxieties we’re all facing, worldwide and together. For some, such as the elderly or vulnerable, the anxiety is more acute. And we have all realised, belatedly though it might be, that all of us are vulnerable in some way.

I moved to Ireland nearly four years ago. I moved for love, and I found more love in the bargain. I now have two young children and a loving partner. And that, quite simply, is still absolutely amazing to me.

This never used to be a problem. There were always flights between Boston and Ireland. If you booked well in advance, you could even get them cheap. My parents were just here over Christmas, and we were planning to fly over for Easter. Not to mention the small air invasion our wedding is (was?) going to bring Shannon Airport in July.

I said goodbye to my parents in the early hours of the morning on January 2nd, before they drove to Shannon. In China, the first cases of coronavirus were still being presented as an unknown cause of pneumonia. My parents and I didn’t give each other special hugs, or exchange any extra words of comfort for the months to come. (At five in the morning, it was all we could do to mumble blearily at each other and remember where to put the suitcases.)

At that time, we didn’t know. And as of right now, we still don’t really know – how special that goodbye was. Or, most importantly, when we will have the privilege of casually saying goodbye again.

Sometimes, I picture a large bridge between me and my family, extending across the wild and dark Atlantic. It was there so long that I nearly stopped seeing it, like an unobtrusive picture frame. I took it for granted that it would always be there. It might not always be affordable, or practical, but at least it was still there.

Now, I’m watching chunks of that bridge fall away; concrete slabs crumbling and falling into the dark sea. Overnight, overseas flights are cancelled; travel bans and lockdowns are ubiquitous; and the airlines are saying they won’t survive past May.

The gravity of the situation didn’t occur to me until a few weeks ago when my partner told me I should still go for Easter. US citizens at that point were still allowed to fly back. And I knew I couldn’t. I couldn’t leave the kids, or her, in the middle of a pandemic. Soon after it was confirmed that even if I was able to go, I couldn’t make it back.

The last of the bridge crumbled and collapsed beneath the waves.

Of course, I’m more immediately scared for the elderly and for those with chronic illnesses and those who fight in the front lines against disease – including the many in my own family who fall into those categories. Like with everyone else, health takes precedence (for everyone but insurance companies, anyway).

But many people will feel relieved when they can finally leave their houses again. They’ll run down the street to the loved ones they missed and worried over through pane-glass windows – straight through that two-metre barrier and straight into their arms.

My partner’s dad especially; he’s vulnerable and I’ve missed many aspects of friendship with him. (Not to mention, our determined search through the Sunday papers for a sporting event – any sporting event really – to excuse a quick nip down to the pub for a pint or two.)

But after the local reunions are done, and I’ve seen my partner and my kids – the ones I love most – back to their regular routines, I’ll walk down to the pier by myself. I’ll walk down to the sea and stare at the waves, and I’ll wait for that crumbled bridge to rise out of the water again.

I’ll wait for that bridge, the one that can lead me home again, to the ones I loved first.