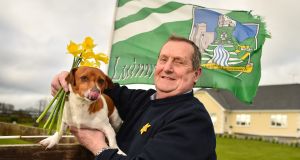 Mike O’Donoghue, along with his dog ‘Buddy’, at his home in Pallasgreen, Co Limerick, prior to his all-day fundraiser for Daffodil Day 2019. Photograph: Diarmuid Greene

Michael O’Donoghue may have retired from his job in the postal service but the Limerick man is still making his presence felt in the local community.

For the past five years, the 68-year-old has been hosting marathon coffee mornings in aid of the annual Daffodil Day fundraising event for the Irish Cancer Society (ICS).

Having been diagnosed and treated for bowel cancer in 2011, O’Donoghue wanted to get involved but decided to open up his home for an entire day. On Daffodil Day in 2015, he had would-be coffee drinkers popping into his living room from 10am until 10pm, with some staying after the clock struck midnight.

“I wanted to help after all the ICS had done for me when I had cancer and decided to host a 12-hour coffee ‘day’ with the help of three young neighbours,” he says.

“So together with Tara Campbell, Saoirse Corbett and Sarah Dillon, in 2015 we poured tea and coffee for neighbours and friends for 14 hours.”

The quartet lay claim to having the longest running coffee morning in Ireland. O’Donoghue says, “ 280 people turned up the first year and over 300 the following years. Each year the house is pretty much full all day long.”

The retired postman says the event is a community effort rather than a solo one as everyone does what they can, donating baked goods and cups and plates.

“In the days leading up to the event, so many people help with donations and others bring something on the day,” he says.

“It brings all ages together – we have some guests who can’t yet walk and plenty of elderly people as well, in fact, two years ago, our oldest visitor was 100.”

Ahead of Friday’s fundraising events, the Irish Cancer Society revealed that Irish women will be he first in the world to take part in a clinical trial to treat one of the most aggressive forms of breast cancer.

The study will see women with advanced triple negative breast cancer treated with the experimental drug “COTI-2” in combination with chemotherapy at St Vincent’s University Hospital in Dublin.

More than 250 people are diagnosed with triple-negative breast cancer each year. It is often aggressive, difficult to treat and tends to be more common in younger women.

The research is being carried out by Dr Naoise Synnott in University College Dublin and SVUH and is supervised by Prof Joe Duffy and Prof John Crown. Her work was funded by the ICS’s research programme and the Clinical Cancer Research Trust.

It is hoped the trial, funded by Cotinga Pharmaceuticals, will begin recruiting patients later this year. It will be aimed at women whose triple negative breast cancer has spread beyond the breast.

For this year’s Daffodil Day, the society hopes to raise €4million to support cancer patients and their families. www.cancer.ie