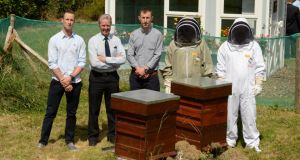 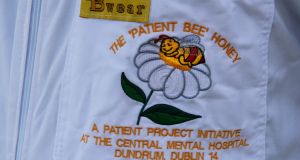 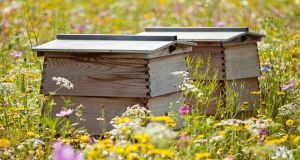 Beekeeping is improving the quality of life of people with severe disabling mental illness at the Central Mental Hospital, Dundrum, according to the results of an innovative project there.

“At a basic level we can provide for the physical needs of our patients, but recovery entails a lot more than that. Many of our patients find it difficult initially to manage their own self-care, but with the treatment and support here they learn to cope with that. As functioning improves they can work on higher needs that we all have, like self-expression through sport, music, art and caring for animals,” says Prof Harry Kennedy, executive clinical director of the National Forensic Mental Health Service.

Forensic mental-health services focus on the care of people who have severe mental illness and who have come into contact with law-enforcement agencies such as the Garda, the courts and the Prison Service. In Ireland, the service is based at the Central Mental Hospital, where caring for animals is part of a programme of treatments focusing on patients’ social and occupational needs.

Patients at the hospital can take part in these programmes while also receiving treatment and therapy for mental illness, he explains.

The project was set up in 2012 by a team of nurses, doctors and social workers with money raised by patients’ families. “It was open to all patients who wanted to take part, and we were all surprised by the level of interest,” says nurse Bernard English.

The decision to introduce beekeeping came in 2012. “A lot of planning went into setting up the hives, working around our existing chickens, turtle, dog and garden projects,” says English. “Then the two beehives were built here in the hospital from scratch by patients and staff working together. Some of the patients went with their social workers to buy the materials, which was great but required a lot of planning.”

Staff and patients did a 10-week beekeeping course together and then sat beekeeping exams. “We all did the course homework together and it gave us something to talk about other than illness,” says nurse Karl Kiernan. “It was a huge achievement for some of our patients, who had never had formal training or sat any formal exam before. We had an awards ceremony for the patients who completed the course, and their families and friends could come along. For some of them it was their first qualification.”

Liam McGarry of the Irish Beekeepers Association gave the beekeeping course. “It was the same course that I give everywhere else, the same exam everyone else sits. People find it fascinating that each bee lives for only six weeks but each one has a particular role and it is important to the life-cycle of the whole hive. Bees actually don’t care where they live, what matters is the care they get,” he says.

“Safety is obviously a big focus here. It’s important that everything is carefully managed to support recovery. I was surprised by the level of interest; the patients were reading ahead in the books and asking lots of questions, even making jokes sometimes.

“In the first summer we harvested 57 jars of honey and the team made their own labels: they called it Patient Bee honey, and sold it to friends and staff. Now we have five hives in partnership with the Kilternan Beekeeping group and the HSE, and we’ve added different patient projects using the beeswax, like making candles and body balm.”

The project won the patient education award at the 2014 Irish Healthcare Awards, and two of the patients went with staff to the ceremony, says Dr Damian Mohan, who supervised the project.

“The partnership aspect of the project was very important to us, because it’s one way of tackling stigma head-on and being involved in the community,” says hospital manager Pauline Gill.

At the official opening of the beekeeping observatory built by patients and staff, Kathleen Lynch, Minister of State for Disability, Equality and Mental Health, said, “The Central Mental Hospital is unique. We’ve spent the last number of years trying to normalise mental-health problems, but we also have to recognise there are people with severe mental illness who are very vulnerable and have unique needs. This is an essential service for those people.

“Socialising and talking can be one of the first things to be lost in mental illness, then your job, friends, family and your sense of self. The expert care here helps people to recover in a meaningful way, and these projects are all part of that,” she said.

One of the family carers who fundraised for the project agrees: “It’s an amazing boost for the guys involved: it’s so new to them to feel involved in something.”

One participant described being involved in making the beekeeping observatory from scrap timber, saying he was “delighted to be part of a team”. Another emphasised the social skills he gained, “meeting people and having a conversation with other patients and with staff about something other than how I was feeling”.

The beekeeping team studied the effect of taking part in the project on patients’ wellbeing. “We found quality of life was much improved and there was an improvement in self-esteem over just the first six months of the project,” says Dr Caoimhe Clarke, who worked on the team. “The honey yield is increasing year on year, and the money goes back into the project so it’s self-financing now,” she says.

According to Jackie Cahill Norris, occupational therapist in the animal husbandry programme: “Our animals here are rescue animals. All of us at some stage in our lives will need to be cared for, but to be able to nurture something less capable than you brings out something innately human in everyone. It works here because everyone has to do their bit to keep the projects running. Some patients have said they’d be lost without their role looking after the animals. As we say in the garden project, ‘We grow people here and if the plants grow too, that’s a bonus.’ ”