Ask the Expert: My 13-year-old son is addicted to online gaming

Though the increased use of modern technology and the internet has brought many benefits, there have been a lot of downsides 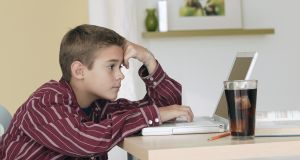 Many young people and adults are using technology so frequently that it is interfering in normal family relationships and it has replaced many other healthy childhood pursuits. Photograph: Thinkstock

My son, who is 13, is completely addicted to technology, particularly online gaming which he would happily spend the entire day on if he was allowed. It has got to the point where he barely engages in family life and is doing the minimum of homework. We are fighting all the time about it. Last week, after a blow-up, I took his tablet off him and he went ballistic, becoming really aggressive. I was shocked.

He says we are trying to ruin his life; that we are mad trying to stop him using the gaming site. He says he hates us, he wants us to just leave him alone and he can’t wait until he leaves home.

There is a terrible atmosphere in the house and it is affecting everyone, including his younger sister and brother. I don’t know what to do. Is he really addicted?

Though the increased use of modern technology and the internet has brought many benefits, there have been a lot of downsides.

Many young people and adults are now using it so frequently that it is interfering in normal family relationships and it has replaced many other healthy childhood pursuits. For some, technology such as online gaming or social media has become an addiction. Though using technology for long periods does not mean someone is addicted, when it becomes compulsive and dominant in someone’s life, then this should be considered.

Other signs of an addiction include secret and compulsive usage, aggression when removal is suggested, isolation and withdrawal from family life, reduced interest in school, healthy interests and real world friendships. For these reasons I would suggest you are right to be worried about your son and to consider ways to help him.

Show him you care and understand

It is easy to criticise and to get angry with a family member who is addicted and take their addictive behaviours as a personal attack on you. However, this can make them see you as the enemy, or drive them further away or make them feel you don’t love them.

It is helpful to adopt a more understanding approach. Take time to consider just how understandable it is to become addicted in the overwhelming and immersive gaming worlds. Try not to take his behaviour personally and see it as related to an addiction that is affecting him.

You might find it helpful to read about gaming addiction and there are lots of good resources for parents and family members (for example, olganon.org). When you talk to your son, remind him of how much you love him and how you are concerned only for his happiness and wellbeing.

Be specific in your concerns

Explain to your son your worries about his overuse of technology and that he might be addicted. It can helpful to read together some of the articles online about gaming addiction (see above) and to ask him what he thinks.

Be very specific in what you are concerned about. For example, you might say I think your use of the games has become a problem because when I ask you to turn it off at the agreed time you become abusive or you have stopped meeting friends or sitting down with the family for dinner, and so on.

Adopt a gradual approach with limits

When dealing with a teen overusing technology it is easy to become frustrated and adopt an all-or-nothing approach by threatening to remove it altogether, usually in the midst of a heated exchange. Generally, a more gradual approach that invites your son to reflect and take responsibility can work more effectively.

For example, you might first explain your concerns, read some articles together and then agree to log/ record how he is using the games over the course of a week.

You then might move to set some agreed limits that are open to review depending on progress. For example, “We will try a routine next week of no games after 8pm or no games until home work is done.”

It is important to focus on what is expected and what will happen if the rule is broken – “We will know that this routine is working if you turn off at the agreed time without being abusive and your homework is done well. If it is not working, we will consider removing the games for longer.”

One of the big challenges for parents around technology in the home is that the children tend to know more about it and parents cede inappropriate control to the children. For example, they might say that the child can have only two hours on technology but they have no way of monitoring this. Or a young teen might thwart the rule of no technology at night by turning the wifi back on at 2am or using the neighbour’s wifi.

To enforce rules around technology, you need to be computer savvy. You need to have full control of the wifi or to be able to physically remove the devices at non-use time.

It is important to take time to find out about the programmes your teen is using and to use parental control software for every device you give your teenager (for example, most gaming devices allow you to set a maximum use).

I also recommend that young adolescents aren’t immediately given the PIN to a device when they get it so they have to come to you to access it so you can ensure responsible use. Once they earn trust and know the PIN, you should also know it so there is an understanding their activity is monitored; this is all to ensure safety.

Focus on other positive goals

Finally, it is important not to just focus on “not using technology so much” and instead focus on positive healthy goals for your teenager.

Encourage him to take up sport or other hobbies, to meet friends, do a community project and even simply spend more time with the family. You can use incentives to help him. For example, you can strike a deal with him that he can have extra 30 minutes’ gaming if he helps prepare the dinner or provide him with extra pocket money if he keeps up a new activity.

Dr John Sharry is a family psychotherapist and co-developer of the Parents Plus Programmes. He will be delivering a workshop on “Creating Balance in Your Life” on Saturday, 9th January (10am-1pm) in Wynn’s Hotel in Dublin 1. See solutiontalk.ie for details. For more Ask the Expert columns, see irishtimes.com