Are you guilty of ‘oversharenting’?

Has the child given consent for any of their information to be shared on social media? 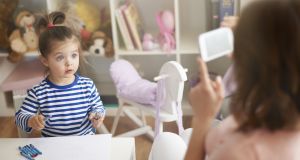 Social media is not a good forum to express complex emotions and parents need to be aware that, when older, a child may read what a parent wrote about them. Photograph: Thinkstock

Taking photos of your children is one thing, sharing them on social media is another.

“Oversharenting” is the term coined for frequent posting about offspring. While Paul Gilligan, chief executive of St Patrick’s Mental Health Services, says he understands that many parents find sharing information, particularly with family and friends, supportive and fulfilling, he warns about the impact it could have on children.

“I think there are serious psychological and emotional risks,” he says, and advises parents to ensure their own motives are the right ones – that they are not sharing information for the need for recognition, for approval or due to peer pressure.

Parents now talk about feeling guilty that they haven’t put stuff up on Facebook, because people might think they are not “vested” in their children, he says.

“First and foremost, and I know this sounds a bit purist, but the child hasn’t given any consent to this information being shared,” says Gilligan, explaining that part of the way a child forms their identity is through having a private self – that some information will be private to them.

If that breaks down and they suddenly find a neighbour indicating that they know something about them that there would be no reason for them to know, “the child sees it as a label and begins to feel that their lives are not in their control”.

Social media isn’t a suitable forum to express complex emotions and parents need to be aware that, when older, a child may read what a parent wrote about them.

“The other concern is the child has a digital footprint they have no say on and will be there pretty much for their life,” Gilligan says.

It is not so much about the misuse of images, which is obviously a worry but very rare, it’s more about how people reading the posts characterise this child.

If it’s negative, people start thinking little Johnny is a bit of a problem; or if mammy thinks little Johnny is fantastic, resentment can build. In sharing information, he adds, parents really risk breaking the bond of integrity and trust between their kids and themselves.

The Children’s Rights Alliance’s concern about social media is that images of children have been used and targeted by paedophiles, says its chief executive, Tanya Ward.

People can think they are sharing photographs with just friends and families, not realising their wider reach.

“The principle is that once you put stuff out on social media, you kind of lose control of it to some degree.”

Legally, there is nothing to stop parents putting up photos that include other people’s children, she says, but personally she believes “If another adult shared a picture of a child and the parent wasn’t happy, that parent should be able to say ‘please take it down’.”

While it’s impossible for schools to ban parents from posting photos that include other people’s children, they can give guidelines, suggests Áine Lynch, of the National Parents’ Council Primary.

However, parents are trying to reconcile the reality of social media with what we would have grown up with, she suggests. “That is how we are trying to make sense of it but it actually doesn’t make sense.”

People are taking photos all the time, in all situations and putting them up on Facebook and that is just happening, she adds. If schools are saying they can’t deal with people making them responsible for that, “it’s a reasonable stance”.