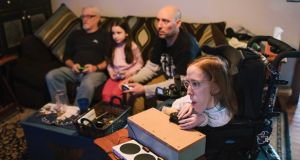 Erin Hawley grew up immersed in video games, progressing from Pong on the Atari 2600 to Sonic the Hedgehog on the Sega Genesis to Tomb Raider on the Sony PlayStation.

But as the hand-held controllers became more complex and her muscular dystrophy became more debilitating, she was eventually forced to stop playing console games. Even holding a controller is difficult for Hawley because of the weight, and her hands are unable to reach certain buttons.

To support gamers with physical disabilities, an industrious community has for years modified existing controllers or devised new ones altogether. And now those efforts, by organisations such as SpecialEffect, have been amplified by Microsoft, which in September released an adaptive controller for the Xbox One.

“We tried to figure out a way to accelerate their practices so that they could help more people,” said Bryce Johnson, Microsoft’s inclusive lead for product research and accessibility. “The idea of cracking open a controller for someone who just needs a couple of extra buttons is an arduous task.”

That grey rectangle with two red buttons is a gaming relic. Modern controllers require the player to combine a sweeping legato – two analog sticks, one controlling a character’s head and one its feet, are used simultaneously – with the precise staccato of four buttons, two triggers and two bumpers.

It can be challenging, and especially so for those with physical disabilities. Some e-sports competitors have operated controllers with their lips and chin, or their cheek and tongue. Hawley (35) cannot use her index finger to pull the right trigger on the traditional Xbox controller.

Instead she can press an elbow against one of the two 4-inch buttons on the adaptive controller, which she tested for Microsoft and which has resurrected a pastime. She now plays games like Mortal Kombat and Kingdom Hearts with her brother and her niece every Sunday.

The power of the adaptive controller stems from its 19 3.5mm input jacks and two USB ports, which enable users to plug in peripherals like external switches and buttons. Many players share intel about setups to accommodate specific physical needs. “A lot of my friends, it just changed how they gamed,” said Hawley, who created the Geeky Gimp website, which examines how the entertainment industry portrays disabilities. “And it’s also changed how they engage in the community.”

Computer gaming has long had an ethos of customisation, and Hawley turned there during the six years she did not play console games. She can operate a keyboard and mouse, and people without use of their hands can benefit from eye-tracking and voice commands.

But console developers design their products for the masses, and people with disabilities had long been overlooked. In 1989, Nintendo released a hands-free controller that players operated with their chins while blowing into and sucking from a tube, but for decades the market was ceded to external creators.

It takes Benjamin J Heckendorn about three hours to create a dozen parts on a 3-D printer and screw them to the bottom of a traditional Xbox controller. The first one-handed controller he built was for a veteran who had lost an arm in the Iraq war; he has sold about 250 since for €310 each, many to customers who have had strokes or been in motorcycle crashes. “Part of the recovery process is doing the normal things in life you love,” Heckendorn said, “and for an increasing number of people, that’s video games”.

The Adroit Switchblade, a black box sprinkled with ports to plug in auxiliary controls, was a precursor to Microsoft’s adaptive controller. “It truly was a person sitting there all day soldering wires together and testing it,” said Mark Barlet, the founder of AbleGamers, which teamed up with Evil Controllers to distribute about 220 Switchblades.

Microsoft’s adaptive controller was envisioned at an internal hackathon in 2015, and refined in consultation with nonprofits and hospitals. Its reach was extended by the cost savings of mass production and an advertising budget large enough to air a Super Bowl commercial.

Keeping the controller reasonably priced was important to Microsoft, Johnson said. It costs €90, but maximising its potential – unlike the traditional €55 controller, it does not come with analog sticks or rumble packs, which vibrate to provide tactile feedback – will require a larger investment. On its website, Microsoft lists third-party attachments ranging from a €20 foot pedal to a €500 mouth-operated joystick.

The controller’s versatility, Johnson said, may also make it attractive to professional gamers who value any technical advantages. And accessibility is expected to become more important to the gaming industry as an aging user base faces more physical limitations, including loss of fine motor skills, vision and hearing.

Most games now let players wholly remap controllers so any in-game action, such as reloading a weapon, can be assigned to any physical input. Recent blockbuster titles like Uncharted 4: A Thief’s End and Shadow of the Tomb Raider allow players to navigate using only one of the two analog sticks, and Microsoft has introduced a co-pilot feature that allows two controllers to act as one.

The increased commitment to accessibility has benefited people who frequently turn to video games as a respite from the physical demands and social pressures of the real world.

“If you’re on the streets, everyone knows you’re a profoundly disabled individual,” Barlet said. “You can’t hide this fact. But in a video game, you’re a player. We all jump into video games for some level of fantasy.”