A tremor threatened my career and way of life

I couldn’t drive, drink alcohol or use a computer to write my freelance articles 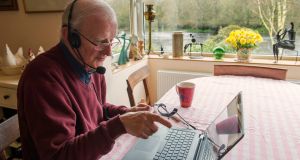 Having written thousands of news stories and feature articles in 54 years of journalism, typing rapidly with just two fingers, imagine the shock of suddenly noticing a tremor in my hands. To say that it was sudden is not entirely true because I first became aware about a year and a half ago of what my GP subsequently diagnosed as a “benign essential tremor”.

To be honest, the shock really hit me when I had to give up a lifetime hobby of tying salmon flies for fear of impaling myself on the sharp hooks as my tremor became more pronounced. That was bad enough, but when I began to have difficulty tying relatively simple knots when wading a stream or even standing on the bank of the river, I knew I was in serious trouble.

From living beside a salmon pool on the river Lee in Cork for the best part of 50 years, and going to Mayo for nearly three decades to fish the Owenmore at Bangor Erris, salmon fishing had become a central part of my life, a feeling deepened by swapping yarns over a pint or two at the end of a day on the river. It began to dawn on me that giving up those enjoyable pursuits would involve a dramatic change of lifestyle.

My GP decided to refer me to a specialist as soon as the tremor showed the first signs of interfering with my freelance work. After an involuntary double-click would have the effect of freezing the screen, the task of unfreezing it with a deadline looming usually involved a phone call to my patient son-in-law, an IT man blessed with the rare gift of being able to talk me through recurring problems.

The first time it happened, the solution for unfreezing the screen was to double-click again. But believe it or not, that’s not an easy thing to do when you have a tremor, especially as it gets worse at times of stress. To make matters worse, my once neat handwriting is no longer legible.

The specialist pointed out that this “action” or “intentional” tremor invariably happened when I picked something up. She put me on a course of two Mysoline tablets a day, one in the morning and the other at night. While not making me totally gaga, they had the effect of sometimes causing me to drop off to sleep at the blink of an eye.

Driving the car was out while taking the tablets, and I also had to give up alcohol because the combination makes one quite ill. The impact on my lifestyle was becoming more dramatic by the day.

When a friend also developed a tremor, he gave up the booze early in January and his shake disappeared within weeks. But in my case, fully three months after giving up the drink, my tremor is still there and, if anything, has deteriorated since the specialist took me off the tablets. The only alternative treatment, involving the use of beta blockers, was also ruled out.

And that’s where University College Cork enters the story. After mentioning the tremor to a mutual friend whose daughter works there, my wife told me about something called a “voice-recognition system”.

The upshot was an invitation to visit the disability centre at the Boole Library, where lab technician Tom Kenny introduced me to speech-recognition software Dragon Naturally Speaking. Some 1,200 students are registered there with disabilities ranging from dyslexia to sight impairment.

On my first reading of a prepared text using the headphone, words appeared like magic across the computer screen. I was instantly convinced that voice recognition could be the solution to the growing problems caused by my tremor.

Emphasising that the software required a great deal of space, Kenny suggested getting a computer system with at least eight gigabytes of memory and warned against buying a noisy one, as noise could muffle the accuracy of Dragon’s dictation and commands.

So, on Black Friday last year, I went out and bought a laptop. The laptop I bought does not have an internal CD player, so we had to buy an external gadget to download the software. The verdict? So far, so good – good enough to help me to write this, despite the tremor.