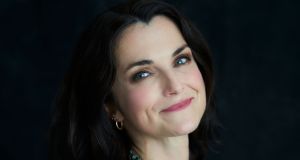 Dealing with an illness or a debilitating condition is always going to take its toll. But it is made even more arduous when the diagnosis is uncommon, and the sufferer doesn’t know why they are feeling unwell – and can end up fearing the worst.

This was the case for Máirín Ni Bheacháin, who began to experience a succession of worrying symptoms, to which doctors could find no cause. “I first started to notice some symptoms around 2012,” says the 45-year old. “There were changes to my skin and I was losing weight without trying to. I also found it difficult to push a buggy or to cycle my bike and I began to feel a loss [of sensation] along the right side of my body. I went to see my doctor [to no avail] and continued to go back and forth as no-one seemed to know what the problem was.

“Then one day after having an episode at work, I ended up going to a stroke clinic, but even then, no one could see what was wrong.”

Mairin, who is married to Gavin Kennedy and has two children – Muirne (11) and Ewan (9), went for a number of tests and was relieved to finally discover what was wrong with her. But this diagnosis proved incorrect and it took over a year of uncertainty and debilitating symptoms before she was finally diagnosed with a rare condition called Moyamoya, which restricts the flow of oxygen to the brain and can only be treated through brain surgery.

“I went for various scans and eventually went to see a neurologist who diagnosed me with hemiplegic migraines,” she says. “He said the symptoms mimicked a stroke and I was relieved to finally have a diagnosis. But the medication I was put on didn’t work and I continued to lose the power along the right side of my body and suffer with migraines.

“At this point I thought I was losing my mind and took a year off work, during which I attended a psychotherapist. Once that year was up, I tried to return to work but the symptoms persisted, so I went for another scan. A few days after this, while I was at work, I got a phone call from my doctor telling me that they had discovered some anomaly and I was to go to hospital straight away.”

After the operation, the mother of two spent a month recovering in hospital as she needed extensive rehabilitation

The Dublin woman went to the emergency department, where after another scan, she was diagnosed with an unusual condition and told that she needed surgery immediately. “I presented myself to A&A where I was sent for a brain scan and following that, doctors then diagnosed me with Moyamoya,” she says. “It was the first time I had ever heard of that condition and while I was relieved to finally have a diagnosis, I was very afraid and nervous when I heard I would have to have brain surgery. But Moyamoya is a degenerative disease so I didn’t have any choice as it needed to be done – so I spent a very surreal week in Beaumont Hospital awaiting my operation and having mini strokes.

“This continued during the nine-hour surgery as I also suffered a stroke [while being operated on] and woke up in intensive care unable to speak – but I was very relieved to have woken up at all.”

After the operation, the mother of two spent a month recovering in hospital as she needed extensive rehabilitation to be able to perform some of the most basic tasks we all take for granted.

“The part of my brain which was affected most was the area to do with reading, writing, time, dates and numbers,” she says. “I also had some memory issues – so when I came out, I linked up with the occupational therapy and speech and language services in Baggot Street and attended there once a week. My mum and I did an hour and a half of work each day after which I would have to go to bed to sleep for about three hours. I started by relearning the alphabet and numbers – so now I can read and write but, unfortunately not for pleasure any more.

“I also linked up with the services for the blind [NCBI] which was great for teaching me how to use technology for the blind – as even though I am not blind, some of the reading and writing technology is great. Then after spending over two years in recovery, my sister helped me to write a letter to Dress for Success and they took me on as a stylist.

“Then soon after this I set up my own business, MoStyle.ie, where I work with both men and women on developing a personal style which is true to them. I absolutely love my work and the confidence it brings to people. In the past I have told my story on the radio and after giving a public talk [about my experience] I decided to focus on giving talks on resilience, new beginnings and being your best self.”

Today, Mairin is doing well and going from strength-to-strength in both her personal and professional life. She would advise anyone else who has recently been diagnosed with a rare condition to seek support from as many sources as possible and take any help which is offered. “My health has been great since the surgery and the support from the hospital has been fantastic,” she says. “I no longer link up with Baggott Street and the NCBI, but I know they are there if I need them.

“And in terms of my business, I avail of the services provided by various buddies like Enterprise Ireland, Fingal LEO, Dublin City Women LEO, Empower and Dún Laoghaire Rathdown Chamber of Commerce – but the biggest resource I have had throughout all of this, is my family.

“So my advice to somebody recently diagnosed with a rare condition would be to find a family member, friend or somebody in the hospital who can help you to link up with all the available services. in my case, this person was my mum. When you are ill it is very difficult to organise this kind of thing and sometimes you need to be able to think outside the box. I have found that if you don’t ask you don’t get.”

- Moyamoya disease is a rare blood vessel (vascular) disorder in which the carotid artery in the skull becomes blocked or narrowed, reducing blood flow to your brain.
- Tiny blood vessels then open up at the base of the brain in an attempt to supply the brain with blood.
- The condition may cause a mini-stroke, stroke, or bleeding in the brain. It can also affect how well your brain functions and cause cognitive and developmental delays or disability.
- Moyamoya disease most commonly affects children, but adults may also have the condition.