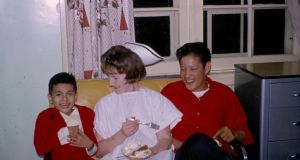 For a long time, Laura Cranmer never thought about her time in hospital as a young child with tuberculosis. But her discovery in adulthood that she’d been to a so-called “Indian hospital” made her worry about the kinds of treatments she’d received.

Her questioning grew so intense that she ended up in therapy.

“It created such alarm in me,” she says. “To contemplate that, while I’d been in there as a child, I could have been injected with anything. As a result I have quite a mistrust of the medical system. If I go to a doctor, I bring my husband or cousin to act as witnesses.”

Racial segregation
To the outsider, this may smack of paranoia. But, Cranmer is one of many Canadian natives – Indian, Inuit and Métis – asking questions about their confinement, sometimes for years at a time, in the country’s racially segregated hospitals.

Cranmer was admitted to Nanaimo hospital in British Columbia in 1959. She spent three years there, between the ages of five and eight. Many of her memories are inchoate, ranging from the sensation of vomiting to a sense of uncertainty about what would happen next.

With news that the hospital is the subject of a lawsuit against Health Canada, she cannot help but wonder about her experience.

Maureen Lux, a historian at Ontario’s Brock University, has been researching the hospitals for the past five years. She believes that mainstream hospitals were reluctant to admit native patients for fear that they would “offend white sensibilities”.

By creating “overheated medical rhetoric about Indian TB and its threat to Canada”, the authorities were able to tuck native patients away out of sight – at roughly half the cost.

Classified records
Lux, who has been examining classified official records, has unearthed some perturbing findings. The hospitals, she points out, were initially conceived to treat tuberculosis (TB), but soon expanded to treat other conditions.

She speaks of cross-infection with TB and hepatitis A among patients, of non-licensed physicians, excessive surgery and medical experiments.

Treatment for TB at the time was often crude, painful and experimental (see panel), irrespective of hospital.

But, says Laurie Meijer Drees, author of Healing Histories, a recently published book on the “Indian hospitals”: “When it came to [native people], there was an added dimension of racist treatment. They mattered less to . . . administrators.

“Sometimes people were not invested in making them better.”

Not all patients have bad memories of the hospitals. Frank Malloway was admitted to Coqualeetza Hospital in British Columbia with TB in the late 1940s. He stayed nearly three years, between the ages of 13 and 15. It saved his life.

“My grandfather walked out of the hospital and he died. My parents wanted me to stay there and get cured,” he says.

“We were treated real good,” he says. “Nobody’s happy to be locked up in the hospital.

“The only thing that cured you was if you remained inactive. I was lying in bed for two years before I could step out. And then I almost fell down.”

For Eleanor Sinclair, a nurse who started working at Saskatchewan’s Fort Qu’Appelle Hospital in the mid-1960s, recent revelations about the hospitals have been upsetting.

Now 74, she enjoyed her experience working with native patients, whom she remembers caring for deeply. “I was in my early 20s. I thought Indian hospitals were okay, that it was nice for the native people,” she says.

“It was a blessing for patients from the north to be in their own hospital with people speaking their language.”

But, for some patients taken far from their families and administered heavy-duty treatments in more hostile environments, it could be a frightening experience.

Clifford Paul Thomas, who spent two years between the ages of four and six at Nanaimo hospital in the mid-1950s, remembers crying for his mother.

“They’d try to give me needles. I was afraid and would try to fight them off. They’d tie me down to the crib, on my back.”

Ashamed about speaking out
It makes him angry to remember those long months stuck in his crib. “Why the hell did they set these hospitals up? The more I think about it, the more upset I get about it,” he says.

His wife, Robina Thomas, is teaching social work students about the era at the University of Victoria.

“Indian hospitals developed because there was no place for us in the regular hospitals,” she says.

“I don’t think in general that native people felt they had the right to speak out about anything. Up to now, people have felt ashamed about speaking out,” she says.

One of the perverse effects of the segregated system was that some native communities protested when the hospitals were eventually wound down or converted in the 1960s and 1970s.

“Paradoxically, people started seeing native healthcare as a right,” says Lux. “It was seen as being better than [mainstream] hospitals, where they were often refused admission.

“They didn’t want to be thrown back to community hospitals and community prejudices.”

Ultimately, “it’s a very long, tangled story”, says Meijer Drees. “Native people were systematically discriminated against in the type of healthcare they received. At the very least, these hospitals were very poorly run and underfunded. You had poor staff with poor resources working with poor people.”

Health Canada declined to comment on the ongoing lawsuit.