Why were so many Irish deported from the US in the 19th century? 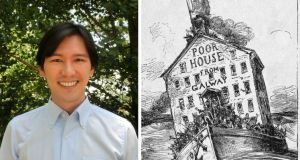 Right: A political cartoon illustration from Harper’s Weekly, by W. A. Rogers. Left: Dr Hidetaka Hirota, postdoctoral researcher in the Society of Fellows at Columbia University.

The story of the Irish Famine and its terrible impact is known to every Irish person. So too is the refuge that Irish immigrants took in mid-19th-century America, where they met harsh “nativism” (intense hostility toward foreigners) by Protestant Americans for their Catholic faith, poverty, and other cultural reasons.

What is little known, even among scholars, is the fact that some Irish migrants were forcibly deported from the US back to Ireland and Britain. The state of Massachusetts, one of the major destinations for Irish migrants, systematically deported destitute Irish men and women as a matter of public policy. As anti-immigrant sentiment grows today in Europe and America, this story of hardship is worth remembering.

The origin of Massachusetts deportation policy dated back to the colonial period in the 17th century. Based on the model of the British poor law, British colonists in Massachusetts developed laws for banishing transient beggars from the colony.

When a large number of impoverished Irish migrants arrived in Massachusetts during the 1840s, nativist Americans in the state built upon the colonial poor law to develop laws for deporting foreign paupers in public almshouses to Europe, Canada, and other American states. Between the 1840s and 1870s, approximately 50,000 people were expelled from Massachusetts under this policy. The statistics provided by Massachusetts authorities does not reveal how many of them were Irish, but correspondence among state officials suggests that the policy practically operated as a measure to reduce the Irish population in Massachusetts.

The enforcement of deportation law was extremely harsh. Some deportees pleaded not to be sent back to Ireland, but their voices usually fell on deaf ears. Elderly people who had spent as long as 40 years in the US were not exempted from deportation. Massachusetts law technically limited overseas removal to noncitizens, but officials had little hesitation in shipping off American citizens of Irish descent, such as American-born children of Irish parents and naturalized Irish immigrants.

In 1855, the Boston Pilot, an Irish Catholic newspaper, fiercely condemned these manners of removal: “How much more will [the deportation law] be abused under this vile tyranny which decrees that poverty, Irishism and Catholicity are crimes, and to be punished as such?”

In the face of this criticism, nativists insisted deportation was a good and necessary policy. Calling Irish paupers “leeches upon our tax payers”, they advocated the uncompromising implementation of the policy to remove from Massachusetts “an ignorant and vicious Irish Catholic population”. One leading nativist in Boston declared in 1858 that an Irishman “will not work while he can exist by begging”.

Upon arriving in Ireland or Britain, Massachusetts officials routinely dumped deportees on the streets without giving them any basic provisions for immediate self-support, such as money, food, and clothes. As a result, deportees often entered local workhouses for survival, while some of them became street beggars.

Arrival in Europe did not necessarily mark the end of the journey. Massachusetts officials often sent deportees to Liverpool as the major European port for transatlantic lines. Frowning at what they called “importation of Irish paupers,” authorities in Liverpool transferred the deportees to Ireland by implementing the British poor law, the very origin of Massachusetts deportation policy. Irish paupers were thus doubly banished, first from America and then from Britain.

Ireland turned out to be an unfriendly place for deportees as well. Just like American and British authorities, poor-law officials in Ireland regarded retuning Irish paupers as unwanted burdens on poor relief. When a group of four deportees entered the workhouse in Cork in 1868, one local official asserted that they “ought not to come at all”. Another Cork official complained, “This city is the receptacle for every poor person who comes from America or England”.

Frustrated with the admission into workhouses of returning migrants, Irish officials even considered sending them back to America. When two destitute Irish women arrived in Galway after having been deported from the United States in September 1859, a local newspaper reported that one of them “will be shipped to America”. Whether or not Galway authorities sent this person back in the end, the idea of re-deportation serves as a grim reminder of the low status of returning paupers in Irish officials’ minds.

At the end of their long migration that included two transatlantic voyages, deportees thus found themselves virtual foreigners in their country of birth. Physically removed from the US and Britain and socially marginalised in Ireland, the Irish migrant poor, in essence, became stateless people in the 19th-century north Atlantic world.

Anti-immigrant sentiment has been gaining enormous political influence and popular support in Europe and America today. While immigrants from Latin America are the major targets for American deportation policy now, some of its origins lay in earlier anti-Irish nativism. At the same time, the deportation of the Irish from 19th-century Massachusetts has much to offer for us to think about the vulnerability of international migrants, especially refugees, under proscriptive governmental policy and the current global problem of social, economic, and legal statelessness many of them are suffering.

Hidetaka Hirota is a Mellon Research Fellow in the Society of Fellows in the Humanities at Columbia University. This article is based on his forthcoming book, Expelling the Poor, which will be published by Oxford University Press in 2017. He spoke on this subject at NUI Galway’s Moore Institute on March 14th.