Irish photographer Kim Cunningham’s latest project, photographs of the new London Irish – creative young Irish people who’ve moved to the British capital – line a wide corridor in the London Irish Centre in Camden. Cunningham has been living in London for 17 years and was invited to take part in the project to mark the 60th anniversary of the centre.

Unlike the subjects of her recent photos, when Cunningham came here in 1997, she found herself very much alone in the big city with no Irish friends. “My experience is so different to the previous generation, and this generation.”

In an earlier award-winning project, Holy Joe’s, Cunningham photographed older Irish people in St Joseph’s Irish Social Club in Highgate. “They were set on preserving an Irish identity that I couldn’t relate to. The older generation were a world away,” she says. “They didn’t want to be here [in England].” But the new generation, having come here en masse, “they don’t even necessarily feel the need to integrate. There’s a sort of a using of London. Recession or no recession, London has a huge amount to offer in any creative industry.” 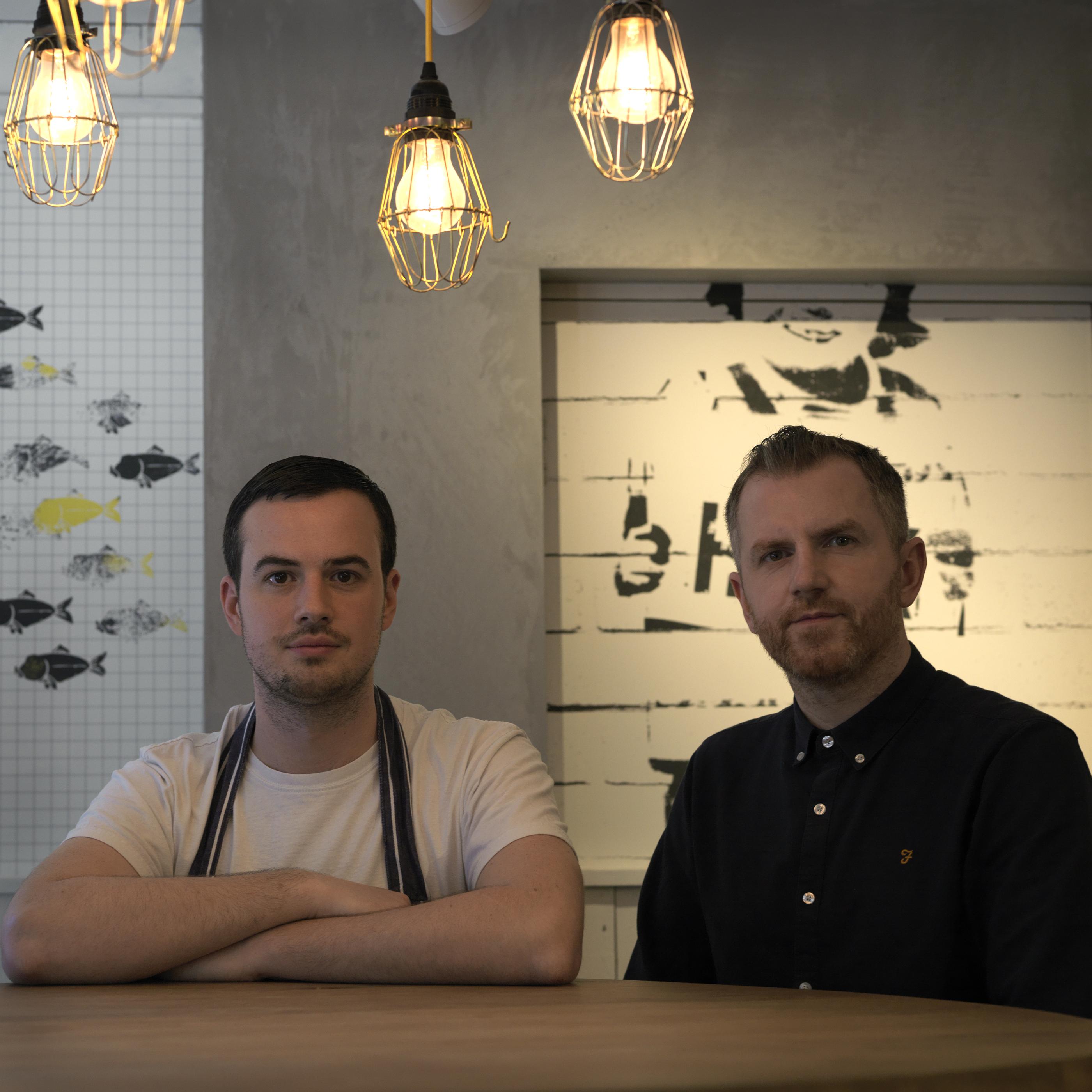 I meet Elizabeth Doonan (27) and Andy MacManus (36) (below) in a busy little Indian restaurant in Dalston after work. They have both been living here for almost six years now and London is resolutely home. Doonan was working in an advertising agency in Dublin when the recession hit. “I couldn’t find a job anywhere.” She moved to London to do a master’s and worked in production companies while studying. “Then I went in to Sony as a music video commissioner and I’ve been there for 2½ years”, working with George Ezra, Foxes and MO. Doonan was at the Brits but won’t tell me any of the gossip. “I’m really settled now. I love going home but it’s definitely for a visit. A lot of my friends are here. I always had it in my head that I would come to London. My job simply doesn’t exist at home.”

MacManus and Doonan live together in an apartment over a pub in Whitechapel. MacManus was turning 30 when he decided to make the move. “I was living in Mullingar and had set up a small graphic design business and was doing a bit of freelance work up in Dublin. I thought ‘Right, if I don’t move now . . .’ There’s a moment and if you don’t grasp it, it’s gone. London has everything for me, design and art and music. I just thought it was an easy move.”

A friend of his offered him a free room above the pub for a couple of months. “I fell into running the pub. Then I went back and did a master’s in graphic design and I’ve been freelancing ever since.”

He works in a studio nearby with about 30 other people – stylists, architects, photographers. “There are about seven or eight other Irish people. A lot of them still have their clients in Ireland and are building up their network here as well.”

There’s a sense that people here are constantly on the move. “For the first three years I made a point of going to one gig and one exhibition a week,” says MacManus. Doonan feels it would be a waste otherwise. “Like, I am knackered, don’t get me wrong. You don’t want to be living your own tiny little life within this huge place. You want to experience it.”

MacManus’s dad owned a pub in Mullingar. “The old guys in my dad’s place would say ‘oh, London can be a lonely oul place,’ but I never found that at all. I think everyone is more connected now.”

In spite of all this, Doonan misses being involved in the big decisions in Ireland. “A guy I know is doing a ‘Get the Boat to Vote’ thing for the marriage equality referendum. But if you’re over 18 months out of the country, you’re not allowed to vote. It’s something that changes the landscape of Ireland and we don’t have a say.”

Sarah Duffy
It is a rainy Sunday afternoon when I meet Sarah Duffy (27) in a cafe in Southbank. She works as an assistant news editor for both Sky News and Channel 5. She has been here for 18 months but it took her a while to settle in. "In my first year, it took ages to feel like it was my proper home." She found herself going back to Ireland every five weeks.

“My mother sat me down last August and said ‘Look, I don’t think you should come home again before Christmas.’ The thing I’ve learned to embrace about London now is that there is no one set group of friends or place to go to make it feel homely and regular. You spend your weekends with different groups of people and sometimes I’m just a total tourist and go off on a riverboat cruise.”

“Ireland is amazing but it’s a small place. There is more for me here opportunity- wise. There are more TV channels. It’s a big place with big opportunities. I want to be here for a couple of years until I feel at some point I’ve ‘done’ London.” She hopes her experience here will eventually make her a more valuable commodity in Irish broadcasting. “Eventually I will live in Ireland again, probably for the rest of my life. So I’d like another few years of exploring.”

James Wolf
I am waiting for James Wolf (27) in a trendy low-lit restaurant in Clerkenwell. When he arrives, the waitress fawns over him in a familiar way. Wolf was working away happily as a musician in Dublin but he wanted "to make a go of music as a viable career – in New York, London or LA – and London is closer to my Mam."

He has been here for three years but continued to run a regular club night, War, in Dublin for the first year. Going home so often made settling difficult. “My feet were in two different spots . . .” Straddling the Irish Sea? “Straddling and struggling.”

Things were beginning to take off in London, thanks in some way to a fortunate meeting on Arthur’s Day in Dublin. “I met Jake from Scissor Sisters. He helped me get my start here. He got me into writing sessions with Kylie [Minogue] and [DJ] David Guetta. ”

He is more settled these days. “I got a record label on board for my last release and then I got Radio 1 plays. I’m going to be playing Koko in Camden in June. Everything is where it should be at this stage. It was quite difficult to get to this point. I was quite green around the gills when I moved over and you’d meet people who would say they’d do something for you but they wouldn’t. People are more reluctant to help each other out here.”

Never a man to shy away from standing out in a crowd, I wonder how he feels about the relative anonymity here.

“Eccentricity is something that’s really celebrated in English culture, which is a good thing. My experience in Ireland, more so when I was in my early 20s, was that I used to get heckled on the street for the way that I dressed and I used to kind of get a hard time for my appearance. Although that’s changing in Dublin, I think here it’s just a little bit easier to be yourself. The city is so busy. People don’t have time to make judgments like that.”

Can he see himself going home? “No. I think for what I want to do I will always have to be over here in some capacity. It’s a shame. If I had a family, that’s a conversation I’d have to open up again because I’d be sad not to have an Irish child. There’s something safe and familiar about home that this place would never be.”

When Wolf leaves, the waitress comes over to clear the glasses.

“He’s wonderful isn’t he? I saw him earlier on Brick Lane in the most amazing metallic blue trench coat.”

Barry Wallace and Simon Whiteside
It is nearly closing time and Barry Wallace (36) is sitting on a high stool at a table in his restaurant, Hook, in Camden. He is jotting away busily in a notebook in front of him, vibrant as he is with ideas and plans. Along with his business partner and chef Simon Whiteside, Barry has been in London now for nine months. With restaurants in Brussels and London, he has his sights set on New York, Madrid, China.

“I was a broken man after the recession. I didn’t know what to do with myself. I used to be a fashion buyer and it wiped out my business. I always had the entrepreneurial spirit – a Del Boy buzz,” he laughs.

Whiteside had been working as a fine-dining chef in London for 10 years and came home in 2011. “He wanted to teach cookery, he wanted to take a break. I broke up with a long-term girlfriend. I’d no job. I was talking to Simon and we said we should do something together. We did a fish and chip market stall in Dublin for three months in the summer of 2012. It was a massive success.”

In 2012, on a trip to Brussels, they did a tasting for an investor from London. “He said he wanted to open a restaurant with us.” They opened Bia Mara in Brussels and now Hook in London.

“I love London, but there’s a certain game you have to play in the restaurant industry over here. It’s hard to get noticed without a PR company. That’s the only thing I don’t like.”

While they do have plans to open a Dublin branch in 2016, Wallace is not sure he’ll be going home for good. “I could be living anywhere in the next five years. I miss Dublin from time to time. I miss how small it is and how I know everyone in the city, that sort of comfort. But I love the adventure of living in a different city.”

After a night of slogging in the kitchen, Whiteside comes out to talk to us. When he moved here for the first time when he was 23, he got a one-way ticket thinking he would never go home. But now, he has a fiancée and daughter and is looking forward to moving back. "I'd prefer my daughter to grow up in Dublin. It's a different pace of life over there. I want her to grow up the way I did, by the sea, around her family. Here, you could be a little bit lost."

London Irish, by Kim Cunningham is at the London Irish Centre, Camden. kimcunningham.co.uk

I’ve become a digital nomad. This month I’m working from a sunny balcony on a Greek island
The Dún Laoghaire-born woman raising millions for France’s national library
A grove of steel trees, a man whose father died before he was born and the grief of a city
Kurds attacked over Istanbul bombing and Iran protests
It’s not you, Ireland, it’s me. I’ve changed. And I’ve built a life abroad

Meat can thaw on the counter, eggs should be stored in the cupboard, and other food safety myths
Amy Huberman: ‘Power couple? I spend half the day just lying on the couch’
Ireland is building too many large detached houses, says construction body
The life and death of Red Óg Murphy: ‘We had no reason to believe anything was wrong’
‘There’s only so much you can charge for soup’ - the restaurateurs closing their doors