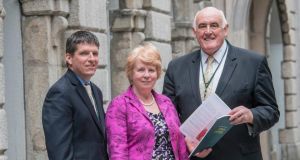 Loneliness and isolation are among the biggest challenges facing new Irish emigrants abroad, which can often lead to depression and sometimes suicide, a conference in Dublin has heard.

At the first Global Irish Civic Forum at Dublin Castle, taking place today and tomorrow, almost 200 people working with Irish communities in 17 countries are meeting to discuss issues such as wellbeing, Irish identity and heritage, emigrant voting rights, and how recent emigrants can be encouraged to return to Ireland.

Opening the forum this morning, Minister for the Diaspora Jimmy Deenihan said the global Irish community were more spread out yet more connected than ever before, thanks to modern technology and a more concerted effort on behalf of the Government to strengthen ties with the diaspora.

In recent years, the relationship between Ireland and its diaspora has “moved from the individual, with stories and connections maintained at the family level, to more of a national appreciation and an international understanding of our global family as a whole unit”, the Minister said.

The two-day forum, which follows a similar model to the bi-annual Global Irish Economic Forum, was proposed as part of the Government’s first ever Diaspora Policy, published in March.

The Minister said the aim was to bring Irish community representatives together to share experiences and ideas, and to help shape Government policy on the diaspora.

“It is a listening and learning process for us,” he said. “We fully appreciate the need to evolve our practice to respond to the needs of Irish communities which themselves are constantly in flux.”

The Irish Government financially supports organisations working with the Irish abroad through the emigrant support programme, which has amounted to €125 million over the past ten years. Liam Kennedy of the Clinton Institute in UCD, which co-hosted the forum with the Department of Foreign Affairs, said the gathering was about finding ways “to step up that support”.

Mental health has emerged as one of the key concerns among many of the organisations taking part in the forum. Joan Freeman, founder of Irish suicide prevention charity Pieta House, said depression is “such a serious issue now among the Irish abroad”.

“When Irish people go away, they bring their issues with them as baggage. The isolation that many of them experience being away from home, away from their friends and family, often compounds this,” she said.

Joe Thompson of the Irish Australian Support Association of Queensland said the size of Australia and how far away it is from Ireland can make newly arrived migrants feel extremely isolated.

He said the families of Irish workers employed on fly-in, fly-out contracts in the mines in Western Australia were particularly at risk.

“They come with their wife and children, and their family will be based in Perth and they could be working six hours away for three weeks, and one week back in Perth. For those three weeks that family have it tough, particularly if they are new migrants and haven’t got a support base there.”

Social media keeps emigrants connected with home but can also “cause isolation for some people” by preventing them from connecting with the real world around them, according to Sinead Crowley, executive director of the Irish International Business Network in London.

She said recent migrants to the UK often experienced practical difficulties too, with things like setting up a bank account, applying for a national insurance number, and getting access to people who will inform them of job opportunities or business leads in their field.

A lack of pre-departure preparation and awareness of visa restrictions is also leading people into difficulty abroad, according to Cathy Murphy, director of Irish Canadian Immigration Centre in Toronto. She said many workers in occupations such as plumbing, nursing and engineering arrive over unaware that they have to sit exams or do additional training before being able to work in Canada, and this was leading to “serious financial problems”.

There is also a lack of awareness among Irish workers on closed work permits that if they lose their job, they cannot continue to work until they switch to another permit, which can take up to five months.

A lack of preparation is also a key problem for young Irish arriving in the US, Mr Aherne said.

“They are not bringing enough savings with them and get a shock when they arrive and find out the cost of living, particularly the cost of accommodation in cities like New York and San Francisco, ” he said.

“They also underestimate the importance of creating a professional-standard resume, of engaging in professional networking by attending events or virtually through LinkedIn, and going the extra mile to get a foot in the door. Third level institutions should be better preparing their graduates for the high standards expected of them.”

They are also unprepared for the differences in social and cultural norms between Ireland and the US. “The US is a less forgiving society than Ireland... All the centres in the US have dealt with serious legal and health cases that have resulted from a lack of awareness. The need for Irish immigrants to have health insurance cannot be emphasised enough… and it is vital that new arrivals are aware of the laws and act accordingly to respect them.”

For the Irish in the US, the limited options for long-term stay is also a huge issue, Mr Aherne said.

“Many of the Irish centres are very active in the quest for immigration reform, but aside from seeking general reform, there is also a hope that a visa specifically for Irish immigrants will be created in recognition of the vital role that the Irish continue to play in the American story today, and one that provides a pathway to permanent residency in the same way that the Donnelly and Morrison visas did in the past.”