Missing home? Not feeling your Irishness? Here come Luke Kelly, Christy Moore and The Blades to the rescue 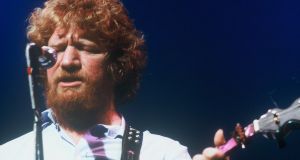 If you’re Irish, then at some point on March 17th you may feel moved to song. It can intensify the emotions you’re feeling about the motherland and help you bond with your compatriots - you may even start to think you’re a good singer. For those living abroad, it’s one of the quintessential emigrant experiences. There are many kinds of “emigration song”: maudlin, funny, heartbreaking, rabble-rousing, ironic, songs about emigration, songs about Ireland, songs Irish people like to sing abroad, and songs that make us wish we were in Ireland when we’re not.

If you’re not in the company of other Irish people, you might prefer to just find a great Irish tune on YouTube and cry/laugh/roar at the screen. Here are five favourites, as suggested by Irish Times journalists.

I was over at the Irish Centre in Hammersmith, London, recently, interviewing different generations of Irish emigrants. One of them was a 92-year-old man from Killarney, who emigrated in 1946 and is still angry about his forced exile. Another was a 70-year-old woman who was reared in an orphanage in Cork and was sent over to London in the early 1960s at the age of 16 and has only recently told her large family about her childhood. London was both refuge and punishment; providing anonymity and jobs but also dislocation and loneliness.

There were one song in particular I was thinking of that day, written by Jimmy McCarthy and sung by Christy Moore in the 1980s, Missing You. Evocative and raw, it captures the anger, regret and loneliness associated with some of the Irish in “London in the nobody zone” and the baggage carried by some emigrants of a certain generation who often wondered about a return to Ireland but realised that going back might be as difficult as staying. One of the final lines is: “ And I’ll never go home now because of the shame of a misfit’s reflection in a shop window pane”.

Living abroad for a while changes a person. Previously you thought of GAA as a special form of torture that was devised by primary schools to fill out the schedules after corporal punishment was outlawed. But when you live in a foreign land, you find you’d happily die for that great game. Never has the inane parping of the Sunday Game sounded sweeter.

The local Irish pub also graduates from being a sheepish injoke to a cultural institution/open-all-hours embassy/refuge from the world entire. The mere fact that they’ll let you run a tab if you’ve forgotten your wallet shows precisely why Ireland is the greatest country in the world, and casual retail credit is the pinnacle of our achievements. And sure where else can you watch the Sunday Game in such fine company.

And then there is the music of Luke Kelly. When you hear Raglan Road after a few months abroad, it’s as if all your ancestors have shown up at once to tell you much your family misses you. There will be tears as you wheezily join in for the chorus, and the soulful look in your misty eyes as you struggle to remember the words of the verse.

One evening, while waiting in an airport bar for a lift home, and after six weeks away working on ships, my father met Luke Kelly. They fell to talking, and Kelly asked him if he wanted to head into town for a few more. My father, a huge Kelly fan, graciously declined, as he hadn’t seen in his family in more than a month. I’ve never forgiven him for it.”

Paul Cleary of The Blades wrote one of the best Irish songs of all time with the bleak staccato poetry narrative of Downmarket: “Everything is black and white and grey, living from day to day to day ... I’m not waiting at an airport, I’m not waiting at a station, I’m standing at a bus stop”. Nothing like a bit of realism to soften that emigrant cough.

The satirical song
Brian Boyd suggests The Craic We Had The Day We Died For Ireland, sung by Ding Dong Denny O’Reilly

For the porter-soaked, tearfully maudlin Irish person abroad, this anti-Wolfe Tones anthem by the self-styled, Republican balladeer Ding Dong Denny O’Reilly should do the job.

And here’s the kind of song Ding Dong Denny O’Reilly is satirising. “Her face and tail are all her own/ But her brains are foreign led.”

Have you a great emigration song? Let us know in the Comment field