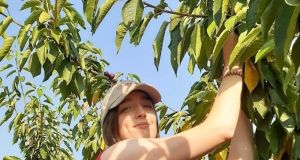 Kirstie Keohane in the Yarra Valley in Victoria. She is disappointed at how the Australian government is treating backpackers

When Denise Daly arrived in Australia last November, she never imagined living in a working hostel with 80 other backpackers during a pandemic.

But when she lost her sales job in Melbourne and her landlord turned the power off, the 29-year-old from Kinsale, Co Cork, decided to leave the city and work towards securing a second year-long working holiday visa.

Since 2005, those who wish to stay in Australia for a second year must complete 88 calendar days of specified regional work, which includes jobs such as harvesting or packing fruit and vegetables, coal-mining, construction or bushfire recovery work before their first-year visa runs out.

She moved to Griffith, a six-hour drive west of Sydney, but says farming jobs are not easy to come by. “There are just not enough jobs to go round. I’m on about 20 or 30 waiting lists.”

According to the department of home affairs, there are currently 119,000 people in Australia on working holiday visas, 8,102 of whom are Irish citizens.

Workers on this type of visa do not qualify for the Australian government’s coronavirus wage subsidy packages. The federal government has repeatedly told those who cannot support themselves to “return to their home countries”.

Although the working hostel is expensive ($1,000 a month) and conditions are not ideal, Daly says the owners will help her find work on nearby farms while she is staying there. “I’m on the roster now. I don’t have work yet, but I’m in the queue.”

She also knows it could be a lot worse.

Two weeks ago she says a man claiming to be a horse farmer replied to a job ad she posted on Gumtree. She says he was “offering work and accommodation”, so she took the two-hour train journey from Melbourne to have a look.

Daly says the man did not own a farm but a “muddy field” with some “young horses that weren’t brushed...they were filthy”.

When she asked where she would sleep, Daly said the man pointed at the couch where it was clear he had been sleeping.

“It was just a proper scam, a major, major scam. He just wanted girls on his farm to look at.”

With unemployment rates rising and no government support, some backpackers say they feel vulnerable and desperate.

According to government figures, 594,300 Australians lost their jobs in April, while jobs in agriculture, forestry and fishing decreased by 6.7 per cent between March 14th and April 18th.

Last month, the Australian minister for agriculture, David Littleproud, said farmers had seen “a lot of interest” in jobs, and that measures were in place “to ensure recruitment of Australians first”.

By the time Kirstie Keohane (29), from Dunshaughlin, Co Meath, had finished her 88 days of farm work on a cherry orchard in the Yarra Valley, the nearest city, Melbourne, had gone into lockdown. Keohane tried to get back to the city but could not find work.

“I’m a sales manager and worked with Brown Thomas and Arnotts for eight years, and I couldn’t even get a job in Aldi as a cashier,” she said.

Throughout the pandemic those working in agriculture were classed as essential workers by the Australian government. The acting minister for immigration Alan Tudge MP said the agriculture sector “relies on temporary visa holders” who “fill a critical workforce gap” .

Keohane has managed to extend her stay at the cherry orchard but says she is disappointed at how the Australian government is treating backpackers.

“The food on the supermarket shelf is what backpackers have picked; it’s what’s essential at the moment. The people who are picking that food aren’t being supported.”

She adds: “It makes us feel very vulnerable.”

Michael Donnelly (27), from Rathfarnham, Dublin, has been working in Albany in Western Australia, picking blueberries and grapes and trying to reach the 88 days required for a second-year visa. However, he managed to complete only 76 days before lockdown made completing those 12 extra days impossible.

“I tried everywhere; all the contacts I’d made, Facebook, Gumtree, but there was nothing. I tried to volunteer for Blazeaid, who were helping in fire-affected areas but even they weren’t taking people on because they didn’t want anyone new coming into the camp.”

Donnelly says he decided to apply for his second year visa with just 76 days complete, hoping there might be some leniency due to the current climate. He is now on a bridging visa as he awaits a decision from the government.

According to the Australian department of home affairs, there are 2,028 other Irish citizens on temporary bridging visas at the moment, waiting to hear about the status of their visas.

Reacting to calls from the Australian government for backpackers to return home, Donnelly says: “I have loads of friends and people I’ve worked with who had two sets of flights cancelled on them and are now $10,000 in debt. So why try to go home, leave myself in financial debt and still be stuck in Australia with no job, no money, no nothing?”

Last year the federal government made it possible for second-year visa holders to apply for a third-year visa if they work for an additional six months in regional areas.

Aoife Turley, from Co Laois, had worked five out of the necessary six months to secure a third-year working holiday visa in Manjimup, three hours south of Perth, when the lockdown started.

She also considered working in areas affected by bushfires but was worried about taking a four-hour flight to the east coast during a pandemic. The situation, she says, is difficult and “similar to job-seeking during the Irish recession”.

But many have found help through Facebook pages set up to match stranded backpackers with jobs, farmers or a free place to stay for the next few months as the restrictions ease.

Robyn Horvath runs a Facebook page for backpackers in Australia.

“The main issues I get are: ‘I’ve lost my job’; ‘I have no money’; ‘I don’t know where to go’; ‘People think I’ve got the virus because I’m a foreigner’; ‘I’m camping out in the middle of nowhere’ or ‘Your government keeps telling me go home, go home, go home’.”

Horvath says she is worried about how Australia is being perceived during this time, and wants to let backpackers know that many Australians are on hand to “help out a mate”.

A spokesperson from the department of home affairs said working holiday-makers in critical sectors such as agriculture “will be eligible for a further visa to keep working in these critical sectors if their current visa is due to expire in the next six months”.

Those who cannot “sustain themselves over the next six months” should “leave the country”, the spokesperson also stressed.