Why not change your food to alter that mood?

A ripping story of action, mayhem, turmoil and tension – all taking place inside your gut 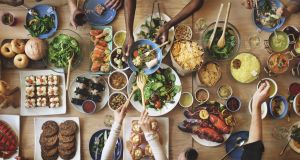 If I was a movie producer at a Hollywood film studio, I would have already optioned the rights to make the film of John Cryan and Ted Dinan’s book, The Psychobiotic Revolution.

For starters, the title is bang to rights, suggesting as it does everything from hippies and the student riots of 1968 to Les Miserables and the growing fashion for hallucinogenic drugs. That’s the 15-35 demographic cohort sewn up already and we haven’t started casting.

But it’s the content of the book that really seals the deal. The Psychobiotic Revolution is basically a thrill-ride, a roller coaster of a narrative with all the Good Guys versus Bad Guys you could hope for in an action flick.

Natural killer genes? Get Tarantino on the phone, now!

This is a story with jumping genes. It has shape-shifting foes and more promiscuity than you can shake a stick at. There is germ warfare and there are natural killer genes.

Natural killer genes? Get Tarantino on the phone, now!

And you want psychological horror in this story? No problem. Just consider the chilling moment when the authors reveal exactly what is going on: “You are not alone in your body . . .”

So, think Ready Player One meets The Exorcist, but with a cast of . . . well, trillions. Because, here’s the thing: all this action, this mayhem, this turmoil and tension, this 100 years war for the ages, is all taking place inside your gut.

It is the story of your microbiota, the brain in your belly. Cryan and Dinan tell this story, “a love story that seems more like a war epic” they admit. But as medical professors they have a serious message: a desire to help you gain control of your microbiota, to support your physical and mental wellbeing.

“You can change the composition of your gut overnight, just by eating different foods,” they promise and then set out ways that will help your gut-brain axis back to wellness.

The fact that it reads like a war epic is fitting because modern foodstuffs have created a war zone in our gut.

Let’s say, for instance, that you love to put lots of commercial mayonnaise on your food and you finish every meal with a few scoops of ice cream. Fair enough, except you need to know that in addition to the eggs and the dairy, you are also taking in emulsifiers, such as polysorbate 80, and carboxymethylcellulose (Yum!).

This additive erodes the mucus barrier of your gut

The effect of these substances is to erode the protective mucus barrier of your gut; and that is when you get inflammation.

Maybe your modern western diet means you also eat foods that contain the thickener maltodextrin. Researchers have found that this additive erodes the mucus barrier of your gut but, in addition, it feeds E. coli, which is bad news indeed for those with Crohn’s Disease, an inflammatory bowel disorder.

We have plenty of E.coli in our gut but, like the nasty lizard in Stranger Things, you don’t want to be feeding and encouraging this bad boy.

The most recent microbiota research shows the war is on and the enemies of your gut health are the modern sweeteners, thickeners, emulsifiers and additives that are in all processed food we eat.

Cryan and Dinan offer a way past through this war zone, even going so far as to offer their own food pyramid, which suggests you eat fermented food daily and have sweets once a week or less.

Aside from its edge-of-the-seat narrative, The Psychobiotic Revolution provides concrete evidence and examples of how correcting eating habits also resets mood and mental health.

Changing your food narrative offers a win-win: you feel better physically and mentally.