Where is the best hospital food in Ireland? This place might have it

A video posted on social media by the Rotunda Hospital has gone viral for showing a meal being served that looks very appetising and nutritionally balanced. Video: Rotunda Hospital 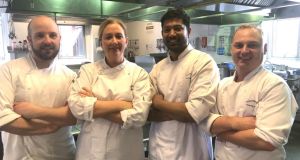 Fresh ideas: Joyce Timmins with some of her team in the kitchen at the Rotunda maternity hospital in Dublin, Trevor Reid, Somnath Khoosea and Maciej Garbas

A video posted on social media of lunch being served to patients at a Dublin hospital has gone viral, with more than 20,000 views in less than 24 hours, and for all the right reasons: the meal is nutritionally balanced, and looks very appetising indeed.

The food served to patients at hospitals in Ireland is often criticised for being of poor quality and questionable nutritional value. But Joyce Timmins, executive chef at the Rotunda maternity hospital in Dublin, has turned perceptions of Irish hospital food on their head this week.

Timmins worked at Michelin-starred restaurants, including Le Manoir aux Quat’Saisons, in Oxfordshire, and Restaurant Patrick Guilbaud, in Dublin, before taking up her position at the Rotunda, two years ago. Her short video, posted to Twitter on Wednesday, of patients’ lunch being served at the hospital, is in stark contrast to the pitiful images of carb-heavy and fat-laden poor-quality hospital food that regularly appear on social media.

In the clip, a chef, Liz Devine, is seen carving a juicy joint of turkey and plating it up with a vibrant selection of mashed potatoes, carrots and broccoli, a spoonful of stuffing and a generous drizzle of dark, glossy gravy, with a final flourish of a scattering of chopped chives. It looks like food being served at a very decent restaurant rather than in an Irish hospital.

Crucially, the carving and plating up are being done adjacent to the wards, with the trays being delivered to patients immediately. It is more usual for food to be plated in a central kitchen and stored in mobile “hotbox” units that keep it warm, sometimes for long periods of time, before being wheeled to wards.

I don’t mean to alarm you, but they’d easily charge nine quid at a food stall at Electric Picnic for the burger I just got served in the Rotunda.

“This is the first hospital I’ve worked in that has done it this way,” Timmins says. “We have a pantry kitchen on each floor, and the food is plated there.” The same food is served throughout the hospital, to both public and private patients.

“We want to provide fresh food that’s cooked on the day, for the day. When you’re using fresh produce, you don’t need to do a lot to it,” Timmins says. “We also want to offer the women a little bit of comfort – they’re away from home – so we do offer some comfort-food options.”

That was something remarked on by the broadcaster Louise McSharry, who recently gave birth to her second child at the hospital, and had high praise for the hospital’s food. “Honestly, I can’t stop going on about how good it is, and comforting too,” she said on Twitter.

The burger she was served came in for special mention. “They’d easily charge nine quid at a food stall at Electric Picnic for the burger I just got served in the Rotunda”.

She also said she would miss the food when she was discharged. “Missing the pulled chicken burrito for dinner tonight because I’m going home, ragin’.”

Another recent patient, Aoife Keane, also took to Twitter to praise the hospital’s food: “I loved the food during my stay last month – was raving about it to anyone who’d listen. Definitely makes recovery easier to have such nutritious options. I’ve even tried to recreate the breakfast tray at home”.

The Rotunda says its emphasis on offering good food came about in response to patient surveys that highlighted the importance hospital users put on being able to eat well.

Fears for tears: why do we tell boys not to cry?
6