Where did your smoked salmon swim from? 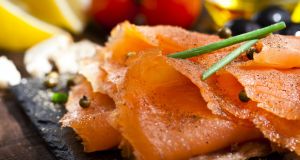 Where smoked salmon was once a rare treat, it is now neither particularly expensive nor elusive. Photograph: iStock

Tales from childhood of Fionn mac Cumhail and the salmon of knowledge lend a prestige to that fish that others don’t enjoy. Smoked salmon, in particular, is still a popular starter. Its credentials as a health food have only helped. Where smoked salmon was once a rare treat, it is now neither particularly expensive nor elusive.

So what can you tell from the packaging? As with most Irish food, if the product has been grown in Ireland, it will say “Irish” in bold letters on the front. If it doesn’t say that, then it is probably from Norway or Scotland, the two other big producers in this part of the world.

Take Nolans Smoked Salmon – it says the fish comes from “the crystal clear waters of the Atlantic”. That’s as likely to be Scotland as Ireland. Check out the circular stamp. If it says IE, it was produced in Ireland.

Lidl’s Beechwood Smoked Salmon has no reference on the front as to where it is from. On the back, however, it says it was farmed in Norway. This product has three official looking stamps on the front. The first two say the fish is a source of protein and high in omega-3, which is the fatty acid believed to be good for brain health. There is also a stamp to say, “Farmed responsibly, ASC Certified”. This refers to the Aquaculture Stewardship Council, which is an independent, international non-profit organisation that manages a global certification and labelling programme for responsible aquaculture.

Working out what the words on the packaging mean is not always as straightforward as it should be. Dunnes Irish Whiskey Smoked Salmon looked like a packet of Irish smoked salmon to me at first and second glance. On reading the back, however, things were a little more complicated. It said, “Farmed salmon. For origin, see letter on the front I=Ireland, F=Faroe Islands, S=Scotland. Smoked and packed in Co Mayo.”

Turning back to the front, there was a big “F” for Faroe Islands, a self-governing territory of Denmark, stamped under the use-by date. So the “Irish” written in big letters on the front referred only to the whiskey. To be fair, the ingredients did include Irish whiskey.

The Irish Organic smoked salmon from Tesco’s Finest range, not only says it is Irish, but names exactly where the fish was bred: Roancarrig, Ireland. This is a fish farm in Cork owned by Mowi, which used to be known as Marine Harvest and is world’s largest salmon farming company. The company emerged in Norway, but has operations around the world now.

Although the fish in this packet was bred in a farm in Ireland, it had to cross the Irish sea to be processed. On the back of the packaging it says, “Produced in the UK”. No doubt that stamp will go on the front when it is sold over there. What an odd journey for the fish.

The packaging also has a green symbol on the front and the letters “OF & G”. This refers to Organic Farmers and Growers (OF&G), a British organisation that certifies about 30 per cent of the UK organic sector. What makes organic fish different is its diet and environment.

Aldi’s Organic Irish Cold Smoked Salmon notes that it is “hand-salted using Irish sea salt”. Turn the pack over and it explains that the process is carried out in Killala, Co Mayo. It carries the stamp of the Irish Organic Association.

To be deemed organic, the salmon must have plenty of space to move about in their cages in the water. Their food must be sustainable and not genetically modified. Chemicals, growth promoters and antibiotics are not allowed.

Most smoked salmon on sale here comes from fish farms, though there is wild salmon too at a price. Nolans Wild Alaskan Smoked salmon, for example, costs close to €70 per kg, which is five times the price of the Suempol brand of farmed salmon from Norway. Intensive farming can bring prices down, though at what cost to quality.

Wherever the fish has spent its life, they are all doused in a layer of salt as part of the smoking process. It draws out moisture and prevents the growth of bacteria. It means, however, that many packets have a red panel on the front indicating that the product is high in salt. Having just 50g of Tesco’s Finest Organic smoked salmon will give you 40 per cent of your recommended daily limit of salt.

That’s a lot, but better than getting it from a highly processed ready meal.

Put a spring in your step for running in February
10